Narendra Modi’s sixth visit to the United States as prime minister, scheduled this month, will also be his longest one so far. Even as the government fills out the contours of his schedule for the six days he will spend in New York during the early days of the United Nations General Assembly, the Howdy Modi event in Houston has been sold out, according to the organisers. It is claimed that the September 22 event, where Modi will speak to 50,000 people of Indian origin, will have the largest audience for a foreign leader visiting the US—“except the Pope”. Modi will use the grand stage to explain his achievements and vision, and, more importantly, the fundamental changes in Jammu and Kashmir. The event timing is slotted for prime time live telecast in India. The organisers think it will outshine Modi’s earlier events in New York and San Francisco.

Houston also is a key centre for Modi’s quest for American gold in the form of investments in the energy sector. The Indian consulate in Houston is busy arranging summits with chief executives of mega oil, gas and renewable energy companies. The political leadership in Texas has been roped in, as the governor, the senators and the Houston mayor are also being wooed, leveraging the more than two lakh Indian diaspora votes. 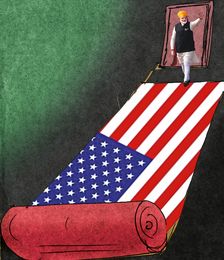 In New York, Modi will woo investors from Wall Street, who have been spooked by the economic slowdown in India and the policy flip-flops of the government in the budget and its aftermath. In the past two weeks, the government has been in a rush to relax curbs on investment. While the opening up of the coal sector for 100 per cent foreign investment is a signal for the American energy sector, there is promise of relaxation on rules governing multi-brand retail.

India-watchers in Washington see a pattern in such decisions being taken by the cabinet ahead of most prime ministerial visits since P.V. Narasimha Rao’s post-economic reforms visits to Washington and New York in the early 1990s. Policy relaxation on strategic and trade issues have preceded the visits of prime ministers I.K. Gujral, A.B. Vajpayee, Manmohan Singh and Modi between 1997 and 2017. Knowing this pattern, the US ministries dealing with foreign affairs, commerce and defence put a lot of pressure on Indian policymakers through the American ambassador in New Delhi to realise the twin objectives of making India a strategic partner in Asia and opening up the Indian economy for American imports in all sectors.

But the Modi visit is also about connecting with leaders of countries who have supported his Kashmir decisions. Diplomats in India’s permanent mission to the United Nations have been asked to set up key meetings with leaders whom Modi has not interacted with, including leaders of emerging economies. While he will meet US President Donald Trump, for the third time after the elections, in New York, a quick dash to Washington for a meeting is uncertain.

The prime minister would also work on the big summits India would be hosting, especially the G-20 meeting of the world’s largest economies scheduled in 2022. India had swapped the allotted slot of 2019 with Japan because of the Lok Sabha elections. The year 2022 is the 75th anniversary of India’s independence, and the target year for the completion of several mega schemes of the NDA government. The summit, to be held around the Independence Day, will be the biggest international event organised in India in the 21st century.

Given the agenda, Modi will have a packed week in the US.