Recent political developments in Rajasthan have been dramatic. The Congress government there, which was formed on a small majority, is struggling to survive.

Gehlot’s removal of Pilot from the ministry has direct links with the party’s high command in Delhi, as the waning leadership is unable to keep its core players satisfied.

A major reason for Pilot’s revolt is his desire to be declared the face of the party in the Rajasthan assembly elections of 2023. He also wants the high command to reward his supporters with either ministries or positions as head of corporations, besides the removal of Avinash Pandey as the general secretary and Congress in-charge in Rajasthan. Pandey’s loyalties are to Gehlot.

A few months ago in Madhya Pradesh, Kamal Nath of the Congress resigned as chief minister and the BJP returned to power, thus reducing the Congress footprint in the country. The exit of this 15-month-old Congress government came a year after the party had lost its government in Karnataka, where it had played second fiddle to the Janata Dal (Secular) despite having more numbers in the assembly.

In Madhya Pradesh, Jyotiraditya Scindia was at loggerheads with Nath and Digvijaya Singh, another Congress veteran, ever since the government was formed there. Scindia ran out of patience with the Congress, as the party made Nath the chief minister despite Scindia leading from the front in the assembly elections. Scindia’s supporters wanted him to be the party president in the state after being denied the post of the chief minister. 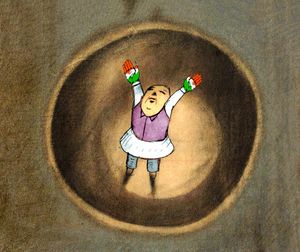 Scindia, who has always maintained his stand as a public servant, threatened to hit the streets if the state government failed to waive farm loans, as promised in the party manifesto. But, to his disappointment, nothing worked in his favour, which must have forced him to leave the party. Finally, when it came to the crunch, Nath tendered his resignation by avoiding the crucial floor test ordered by the Supreme Court.

Uncertainty looms large over the government in Rajasthan, and the Congress is in power in only four other states—Punjab, Chhattisgarh, Jharkhand and Maharashtra, where it is just a fringe player assisting bigger allies, and the Union territory of Puducherry.

But it is a leadership crisis that is plaguing the Congress, and the party is experiencing a battle between the young and the old guard. The young leaders are feeling uneasy and are joining the BJP where they feel their efforts will be recognised under its strong leadership.

The Congress leadership is steadily crumbling in the hands of its nepotistic leaders. It has not looked beyond the Nehru-Gandhi household in 40 years, except during 1991-98 when P.V. Narasimha Rao and Sitaram Kesri took over the charge.

In the event of the demise of a national party like the Congress, regional outfits that have grown at the cost of the Congress will emerge as the opposition for the BJP.

The last seven Lok Sabha elections have seen the steady rise of the BJP, and consequent decline of the Congress. Yet, whatever little hope that is there for the Congress is being killed by its nepotistic leadership and the continuous failure of trust of its major players in the regional political arena. With internal clashes brewing in Chhattisgarh and Punjab as well, it will be an uphill task for the Congress to remain relevant in national reckoning.