Governors should govern themselves

Does Constitution allow BJP to fire from the governor’s shoulder?

The bad example set by elevating the former governor of West Bengal to vice president as a reward for his running battle with Mamata Banerjee has, it would seem, signalled BJP-appointed governors to follow the Jagdeep Dhankhar path by insinuating the Centre’s preferences and priorities into the functioning of popularly elected state governments who are opposed to the BJP, thus undermining of our federal polity.

We have already seen this blatantly done in non-BJP run Maharashtra, Telangana, Jharkhand and, of course, West Bengal, but has now come to the fore in the two sensitive southern states of Kerala and Tamil Nadu where the CPI(M) and the DMK, respectively, have won impressive mandates from the electorate, reducing the BJP to ashes.

In Kerala, the over-ambitious Arif Mohammad Khan, who has run the gamut of virtually every political party in the north—starting with the Congress, and come a cropper consistently—and is now in the tight embrace of the BJP (against whose religious majoritarianism he was a champion at the start of his long and convoluted political innings) has created a constitutional crisis, the latest manifestation of which is the lie that Jawaharlal Nehru invited the RSS to participate in the first Republic Day parade. 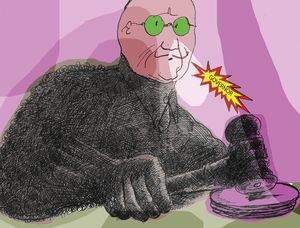 Whereas maintaining decorum is the first requirement of the holder of so senior a Constitutional office as governor, and above all keeping himself strictly above partisan politics in the spirit of the Constitution, Khan actually convened a press conference in Raj Bhavan where he levelled accusations against the Left government and Chief Minister Pinarayi Vijayan, senior CPI(M) leaders and others ministers. Now, it is not only Khan’s right but duty to inform the CM privately of perceived shortcomings in governance and complaining to the President at whose “pleasure” he holds office, but to actually drag such dirty linen into the public discourse surely amounts to abuse of office.

Khan has publicly stated that, “Left parties are following communist ideology, which is a foreign concept that authorises the use of force to silence dissent.” He forgets that the CPI(M) is a duly registered party by the Election Commission that has checked its antecedents before granting recognition. It is all right for a political party to make the claim that he has made, but it is not for a governor to sneer in such a manner at a political party that has repeatedly been elected by the people of Kerala and created history recently by getting itself re-elected.

In neighbouring Tamil Nadu, Governor R.N. Ravi has withheld consent to as many as 20 bills passed by the state legislature. He has provoked all the parties of the alliance that runs the DMK-led government, to prepare a memorandum to the President to withdraw her “pleasure” since the governor lacks “basic knowledge, integrity and impartiality” and is “an embarrassment to the people” of the state. The memo indicts him for “incit(ing) hatred and creat(ing) communal unrest” by assertions such as India being “dependent on one religion” and propagating “conservative and poisonous ideas” amounting to “sedition” as they “attempt to bring hatred and contempt and excite disaffection towards a state government established by law”. Moreover, he has inflicted “deep wounds to Tamil sentiments and pride” by denouncing the state’s “Dravidian heritage”. He has involved himself in partisan politics by returning a bill against the Centre’s NEET and publicly rebuked the state government for rejecting the BJP’s National Education Policy. His latest transgression has been the allegation that the state government delayed bringing the NIA into the investigation of the Coimbatore bomb blast. All this and more “deforms cooperative federalism and destroys our democracy”.

Does the Constitution allow the BJP to fire from the governor’s shoulder in states where the electorate have rejected the overtures of the sangh parivar?