RSS is complicit in systemic polarisation

What has RSS chief done to get BJP “to shun its politics of religious nationalism”?

By calling on RSS chief Mohan Bhagwat have the five Muslim eminences served the cause of their community? Their spokesperson, S.Y. Quraishi, says his group believes in “dialogue”. Fair enough. But were he and his colleagues setting the stage for such a dialogue? Yes, because Bhagwat named four of his senior colleagues who will continue the initiative.

But Bhagwat’s own remarks, as reported by Quraishi, are far from encouraging. He had no convincing responses to the points raised by the Muslim team about “recurrent incidents of lynching”; calls by “Hindutva hotheads for genocide”; or “the marginalisation of the community in every sphere”. Instead, he packed them off with the risible claim that “Hindutva is inclusive”. He continued that “progress is possible only if communities are united” and that the “Constitution is sacred”. None of these bald assertions was apparently challenged by the distinguished Muslims present, who seem to have been more impressed with the “simplicity” of his office furnishings, his “punctuality” and his “patience”, than with getting to the heart of the matter. It brought to mind vividly Chamberlain being taken in by Hitler. 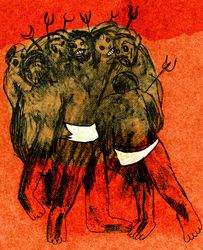 Instead of telling the delegation what the RSS was doing on the ground to rein in the hotheads and those who spoke of “genocide”, Bhagwat resorted to his usual “whataboutery” saying what about Muslims restraining themselves from eating cow-meat in the few states (mostly ruled by the BJP alone or in coalition) in which beef consumption is allowed. Then going on the offensive, asked the delegation to restrain their community from using words like “kafir” (non-believer). The delegation found at last the spirit to say what about “jihadi” and “Pakistani” as descriptions for Muslims but did not press the point that Shah-Modi should stop making such insinuations. Instead, they meekly accepted Bhagwat’s offer of interaction with four RSS representatives.

Comically, Bhagwat’s only public reaction to Quraishi presenting him his magnum opus, The Population Myth: Islam, Family Planning and Politics in India, has been to reiterate at a public meeting his totally bogus charge that Muslim fertility threatens Hindu identity.

Instead, however, of exposing Hindutva hypocrisy, the highly respected vice chancellor of NALSAR, Faizan Mustafa, has weighed in with an impassioned defence of the Quraishi initiative. The “pertinent question”, says he, is what Muslims are willing to disown, not, extraordinarily, whether the RSS will disown their founders for putting out the lie that Muslims can never be true Indians for they turn to Mecca to pray and that there is no more to the record of Muslim rule than barbarity, conversions, rape and killing. Mustafa then recites a number of throwaway lines from Bhagwat that show him as denouncing lynching and seeking “equal” citizenship for Muslims but fails to cite even one concrete example of action taken on the ground—because there is none.

Zakia Soman joins the debate with far greater relevance. Citing the stoking of “religious polarisation”, “citizens being reduced to merely being Hindu or Muslim”, “majoritarian triumphalism” and “Muslims being at the receiving end of every atrocity”, she perceptively underlines what the Quraishi delegation failed to stress: that the RSS is complicit in this “systemic” polarisation.

She goes on to point out that “from lynching to genocide calls, the onslaught on the Muslims has continued” and no steps are being taken to address the “core of fear and alienation among Muslims”. What has the RSS chief done to get the BJP “to shun its politics of religious nationalism”?

Perhaps the Quraishi team, which singularly lacks a woman in its ranks, should take Soman, president of the Bharatiya Muslim Mahila Andolan, to its forthcoming meetings with the Four RSS Horsemen of the Apocalypse.