May I add my voice to over 1.4 billion of my fellow-citizens to congratulate you on your richly deserved elevation to the highest post in our country? Others have been doing so but adding a caveat that you must do something about the deleterious laws relating to tribals that are in the offing, such as the proposed amendments to the Forest Conservation Act, 1927, The Forest Dwellers Act, 2008, and the Land Compensation Act, 2013, that provide for tribal village panchayats to accord 80 per cent people’s approval for any project to be undertaken that would deprive tribal communities of their land. These suggestions, though vital, would take you beyond the ambit of your constitutional remit because you are permitted only to return once to the cabinet for reconsideration any bill put up to you for your signature. If the cabinet reiterates its legislative intention, you, madam Rashtrapatiji, would have no alternative but to go along with it. 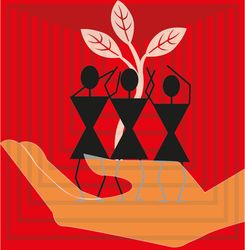 There is, however, one law that directly impinges on the tribal community where you are authorised to act. That is the Provisions of the Panchayats (Extension to Scheduled Areas) Act, 1996, PESA. It is perhaps the only law that the Constitution under Article 243M(4)(b) has mandated Parliament to enact. This was duly done in December 1996 but has been largely left unimplemented by the fifth schedule states, that is, the nine states that have a non-tribal majority but a significant tribal minority. Indeed, the same schedule lays a special responsibility on governors of such composite states to report to you on progress in respect of tribal welfare. As these governors are the president’s appointees and serve at the president’s pleasure, you would be well within your constitutional rights, indeed in exercise of your constitutional duties, to require them to report to Rashtrapati Bhavan in detail on progress in the last quarter century on implementing PESA in letter and spirit. I request you to make this your top priority as our newly elected and widely hailed Rashtrapati.

I am making this special request because you might have missed the front-page report on the Burkapal tribals in The Indian Express on the same day as you were sworn in (July 25). If you would kindly ask a staff member to retrieve it for you, you will find evidence of what the reliance exclusively on security forces to contain naxalism is doing to the lives of innocent tribals in the Sukma area, a story that has been replicated in scores of other Naxal-affected districts. In 2017, the CRPF ordered the sarpanch to gather all the adults of Burkapal village compulsorily for a meeting. They thought this might be to announce an employment project, perhaps on roads. Instead, 112 of them were rounded up and incarcerated in jail without trial for the last five years, before being released by the NIA court for want of any evidence against them. Five “lost years” and “destroyed lives”. To survive, their families “sold our cows , our pigs, our land”. And in accordance with tribal custom, most of their wives left them to live with other men.

PESA deals with development. It does not touch on law and order or public order. How could the CRPF co-opt a sarpanch to bring people together to pick up over a hundred of them with not a shred of evidence that they were Naxalites? And that too “under the draconian powers that UAPA gives to the police”. PESA gives tribal communities the right to development with adequate untied resources to be able to plan and participate in their own development. Fully implemented, this would do more to rid us of Naxalism than all the CRPF. Please give PESA your unbridled attention.