Mani Shankar Aiyar on the BJP's attempt to save the cow

The irony of ironies: it appears that the BJP’s attempt to “save the cow” has generated such a backlash that the party is in grave danger of losing several seats in the ongoing assembly elections in Uttar Pradesh. We shall know for certain on March 10, when the results come in, but indications are that it is the extraordinary increase in “awara pashu” (stray cattle) eating up the standing crop that has emerged as the principal election issue in the region around Ayodhya in eastern UP.

The exponential increase in stray cattle is the consequence of stringent measures to prohibit and prevent cattle (that is, cows no longer yielding milk, bulls and male calves) from being driven over the UP border towards the northeast, Bangladesh, and even beyond to Myanmar and China, where there is a huge market for cattle meat and byproducts. Prime Minister Narendra Modi has had to acknowledge the predominance in farmers’ minds of stray animal parishani (nuisance). The issue needs to be considered in its economic dimensions.

Jawaharlal Nehru instinctively understood this when, in response to the campaign on the eve of Independence to ban cow slaughter, he wrote to Dr Rajendra Prasad on August 7, 1947, that while “no one can doubt the widespread Hindu sentiment in favour of cow protection”, he preferred that the issue be considered in the context of the scientific organisation of animal husbandry, especially as Gandhiji had explicitly stated a few days earlier that since “the Hindu religion prohibits cow slaughter for the Hindus, not for the world”, he—Gandhiji—“opposed any compulsory stoppage of cow slaughter” (Dinanath Gopal Tendulkar; July 25, 1947). This view was eventually incorporated in the directive principles of state policy, which directs the state in Article 48 to “endeavour” to “organise animal husbandry on modern scientific lines” and to “take steps” for “preserving and improving the breeds, and prohibiting the slaughter, of cows and calves and other milch and draught cattle”. 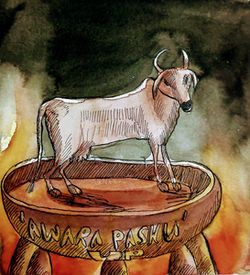 By placing animal husbandry in the state list, the Constitution ensured that there would be only state policies, not a central policy, in this regard, thereby underlining the diversity of eating habits in the country.

To validate Gandhi, Nehru, and the Constitution, one has only to glance at the 2019 census of our bovine population undertaken by the Union ministry of animal husbandry and the export figures for buffalo meat provided by the commerce ministry for 2020-21, backed up by the brilliant reportage of Harish Damodaran (Indian Express; February 22, 2022). What follows is derived from these sources.

Our cattle population amounts to 192 million and buffaloes to just over 109 million. UP accounts for about 70 per cent of our bovines. As buffaloes are not regarded as “cattle”, their slaughter and export earn Yogi Adityanath’s state nearly $3 billion per year, 80 per cent of which directly reaches the poor, mostly Dalits and minorities. Buffalo meat and by-products constitute UP’s major export. This could be doubled to around Rs40,000 crore if legitimacy is accorded to the export beyond state boundaries of cattle on the hoof.

Instead, after their economic life is over, UP’s cattle are released by the owners into the public domain to fend for themselves. And the state government has fallen on its face in providing these holy cows a safe and dignified after-life. The state’s gaushalas are dens of corruption and provide only Rs30 per day per animal, which does not cover even the cost of bhusa (straw), let alone more nutritious feed. And it costs the farmer an average of Rs16,000 (per bigha) to fence his field.

It is precisely because Yogi and Modi ignored or, more probably, were ignorant of, Gandhiji’s wisdom and Nehru’s practical insight that, as one farmer put it to Damodaran, in UP the awara “bull is the only issue”.