When Rajiv went to Punjab, 6 months after Indira was killed: Mani Shankar Aiyar

Seeing Prime Minister Narendra Modi stuck on a flyover for 20 minutes and the hysteria that has followed, this column welcomes the Supreme Court’s decision to undertake an inquiry and stay the possibly partisan inquiries ordered earlier. Why then an entire column on a subject that is, in effect, sub judice?

Only because it brings to my mind another prime minister and another time when Rajiv Gandhi went to pay his tribute at the National Martyr’s Memorial in Hussainiwala, which the current prime minister was thwarted from visiting.

Remember, on March 23, 1985, when Rajiv Gandhi visited Hussainiwala on the anniversary of Bhagat Singh’s martyrdom, less than six months had elapsed since his predecessor had been shot down in cold blood by the very Sikh guards she had insisted on retaining. Anger over Operation Bluestar had peaked. An anti-Sikh pogrom had followed her assassination, blamed by many on the prime minister who had just been sworn in. A Sikh infantry unit had openly rebelled. Brewing trouble in Siachen was bringing the security situation to boiling point with Pakistan.

The Special Protection Group was yet to be inducted. The director of prime minister’s security was dead against Rajiv undertaking the risk. Yet, Rajiv went. I was with him. There was not a trace of anxiety on his face. Calm, collected, he walked with courage and confidence into the lion’s den.

His point was to demonstrate his strong belief that it was not the community but only some misguided elements in it who were resorting to violence in the name of religion and Khalistan. The appointment of Arjun Singh as the new governor of Punjab a few days earlier signalled his intention to work towards a solution. But he gave little indication, beyond his presence in the heart of Punjab, that there was any politics to his visit. The visit was to honour the memory of a greatly loved soldier of freedom, unconnected to any electoral compulsion. 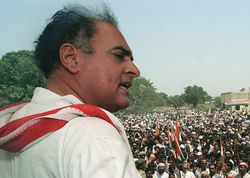 He took to the podium with no bullet-proof glass shield to protect him. Around him were ordinary Punjabis, mostly Sikhs. His unruffled demeanour was reflected in the meeting conducted in peace and harmony. He focused on the martyr and the role of Punjab in defending the country through history and contemporaneously.

“Punjab,” he said in Hindi, “rose as one man in defence of, and for the preservation of, India’s unity”. He talked of Punjab’s farmers freeing us from the stranglehold of the almost inedible PL-480 wheat imported from the United States, and how Punjab’s farmers had been enabled to do so by the Bhakra Dam, crop insurance and the raising of procurement prices.

He referred to “some problems, considerable difficulties, both political and economic” that were facing Punjab and pledged to continue talks while not allowing “Punjab to decline”. But, otherwise, the troubled times were not mentioned. Reminding the audience of Jawaharlal Nehru’s tribute that “Bhagat Singh died so that India lives”, he paid his respects to the memory of the national hero. That was it. No grandstanding. No jumla. No false promises. Just his presence at the very border with Pakistan, in a Punjab disturbed as never before, showed his determination to work out the Punjab Accord—that was concluded a few weeks later.

Rajiv did not sit cowering in a bullet-proof vehicle, surrounded by menacingly armed guards, shying away from the people, converting a tribute to freedom fighters into an election opportunity. Therein lies the difference.