On August 5, 2019, I wrote that the Modi government had just created a Palestine on our northern border. I have been revisiting that thought through the latest intensely violent flare up between Hamas in Gaza and Benyamin Netanyahu’s Israel. Does the parallel hold? Sadly, it does.

When Israel declared itself an independent state on Palestinian territory on May 14, 1948, the Arab states, in a joint military exercise, went to war to strangle the new state at birth. The Zionist settlers won, confirming on the battlefield their right to existence that they had earlier won by an almost unanimous vote at the UN, India opposing. 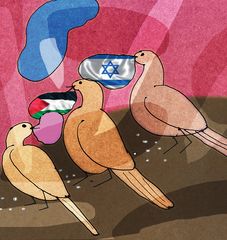 The Arab states tried twice again, in 1967 and 1973, to wrest back Palestine from Israel’s vice-like grip. Both times, they failed. And Israel, twice over, gained more Palestinian land and rid itself of more Palestinians. Meanwhile, Yasser Arafat decided to pause the violence while the international community sought a two-state solution through a 1967 UN resolution to secure Israel’s right to existence and simultaneously the Palestinian right to a state of their own in their homeland.

In 1993, through the Oslo Accords, Arafat won the right for himself and his people to return home. Thus, did the Palestinian National Authority come into being. What the PNA did not get was either sovereignty or even suzerainty. They only got panchayati raj in the Gaza Strip. That is why the 1967 UN resolution that everyone swears by even today is a shredded piece of paper consumed in the fire of Israeli air attacks killing hundreds of defenceless people and Hamas rockets proving Palestinian grit, but being no more than mosquito bites on Israel’s civil population.

It took 39 years, from 1948 to 1987, for the Palestinian people to give up their abject dependence on fellow-Arabs and start an authentic, indigenous intifada themselves with nothing more, at least to begin with, than sticks and stones. The Israelis, who won within days every war launched against them by the Arab states, have not succeeded in the last 44 years in overcoming the intifada launched by the Palestinians themselves. That is where the parallel with Kashmir begins. Even as the Palestinians remained muted spectators when others came to their side, so also have the Kashmiris remained uncooperative when Pakistanis have tried to do their work for them.

By their very nature, intifadas are unpredictable. Yet, no show of state strength has extinguished the flame of equality and justice burning in every Palestinian heart. Intifada is nurtured for years in every individual soul before it self-ignites, like the combustion engine.

So, we must not be misled that for two short years violence in the valley has been kept under a lid by putting a jawan with a machine gun at every street corner. Hundreds have been arrested without cause or complaint. Those not under arrest are under constant threat of being held without explanation. The fundamental principle of habeas corpus has been kept at bay by a complaisant Supreme Court with not a single petition for “producing the body” even taken up for hearing. The lieutenant governor rules autocratically and indefinitely. Civic and constitutional rights are trampled upon. The right to communicate, held fundamental by the Supreme Court for every Indian, is systematically downgraded and arbitrarily shut off for the Indian citizens of the valley.

With the simmering anger being deliberately ignored, an intifada is being nurtured in seven million hearts. I stand by what I said two years ago.