Was India divided in 1947 or twenty years earlier? Back in 1927, the Congress stalwart Motilal Nehru, the liberal leader Tej Bahadur Sapru and the (still) nationalist Muslim Muhammad Ali Jinnah met together and decided that in return for Jinnah yielding on his biggest achievement to date—securing the Congress acceptance of separate electorates that he brought about through the 1916 Lucknow Pact—and acknowledging that separate electorates had poisoned the communal atmosphere, he would urge his supporters to join the national mainstream in fighting for Swaraj, provided the Muslims were assured adequate representation in the central assembly.

They eventually negotiated an agreement (called the Delhi Pact) that acknowledged the Muslim share of undivided India’s population to be 26 per cent and provided reservation of one-third of the seats in the central assembly for the Muslims. It was a sensible compromise that could have forestalled partition of India but failed to muster the required consensus in either the Congress or the Muslim League even though the Congress Working Committee approved it. 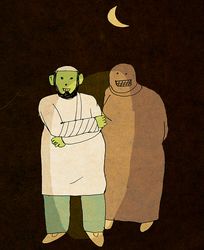 There is another lesson from the global history of the anti-colonial movement that we need to remember: The American Revolution against the British Empire was sparked by the slogan, “no taxation without representation”. That, in effect, is All India Majlis-e-Ittehad-ul-Muslimeen leader Asaduddin Owaisi’s contention. He is raising his voice against a 15 per cent minority continuously losing its representation in the Indian Parliament ever since independence—it has now sunk to under 5 per cent—despite Indian Muslims having long rejected the siren call of Pakistan and demonstrating repeatedly and consistently that they are loyal, patriotic Indians. Indeed, I have been on the same TV platform as Owaisi in Pakistan when in riveting Urdu he lashed out at the Pakistan Jamaat-e-Islami representative for shedding crocodile tears over the condition of Muslims in India. It was unforgettable to hear Owaisi blasting the partition for having divided the subcontinent’s 600 million Muslim community more than territorially dividing India.

For decades after the partition, the Muslim community had relied on the secular parties to ensure adequate legislative representation for their community. Now, they are confronted with not only an openly hostile party in governance but the opportunistic abandonment of their interests by most other parties. Owaisi wants his community to stop outsourcing Muslim interests, particularly political representation, to others. He wants Muslims to take the responsibility for preserving their identity, security and progress into their own hands, but strictly eschewing the kind of anti-majority sentiments that animated the Pakistan movement. He has shown through his actions that there is a place in his party for non-Muslims sympathetic to minority aspirations. His stand is a reaction to the blatant majoritarianism of the party in power and the cowardly retreat of other parties from secular activism.

The short-term consequence is, of course, the division of the secular Muslim votes. But the secular parties have brought this upon themselves by imitating the BJP and being less than enthusiastic in asserting their secular principles above the political imperative of fighting the BJP on its turf. Other minorities—tribal, caste, linguistic, ethnic—are also going their way. To secure opposition unity we have to follow the example of the United Democratic Front in Kerala which is containing identity issues through ensuring representative democratic space for the Indian Union Muslim League. We need to continually assert that India is not a Hindu country, but one for everyone who lives here.