If Pakistan had not been torn out of Mother India, our most difficult neighbour would have been Afghanistan for we would have stoutly defended the Durand Line, arguing that we will not surrender to the Afghans “an inch” of our holy territory. Instead, we watch with considerable schadenfreude, the Pakistanis wrecking their relationship with their immediate neighbour to their north and west by clinging to a frontier conceived by an imperial power.

The Mughal Empire itself could be seen as the extension into the Indo-Gangetic plains of Babar’s Afghan empire. He was re-buried, as he had desired, in Kabul. Indeed, it was an Afghan marauder, Ahmad Shah Abdali, who laid waste the Mughal empire. History is no respecter of mythology nor even of historical precedent. Assam and the seven (now eight) sisters of the northeast became part of India only because the East India Company overthrew the Burmese monarchy and compensated itself with territories that it prised out of the defeated Burmese. We became the proud possessors of much of Uttarakhand only because the Company Bahadur, having gorged itself on all of the Gangetic plains from Bengal to Bihar, turned its attention to Nepal, defeated it in battle, and through the 1816 Treaty of Sugauli decreed that henceforth Kumaon and Garhwal belonged not to the Gorkhas but to the John Company. 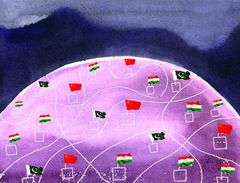 Ladakh became part of India when Aurangzeb conquered it in the 1670s and compelled the local Buddhists to build a grand mosque in Leh in token of their humiliation at Mughal hands. Then Zorawar Singh Kahluria reconquered Ladakh, at the behest of Raja Gulab Singh. East of Ladakh, all of Aksai Chin remained a colour-washed unoccupied territory on British-Indian maps till Jawaharlal Nehru, claiming that “Aksai Chin was part of the Ladakh region for centuries”, ordered in 1954 that Aksai Chin be shown as indubitably Indian on Survey of India maps. No Indian (other than pastoral nomads) had ventured into the barren mountain desert that was Aksai Chin, nor even any Chinese despite the Brits begging them to do so to be available if the Russians advanced beyond central Asia. The Russians did not, and the Brits then lost interest for they believed in “flexible frontiers” in their northern reaches. It was only when the communist Chinese undertook the engineering miracle of linking their two most troublesome provinces, Xinjiang and Tibet, through Aksai Chin that this barren mountain desert was put to its first-ever strategic use.

Rajiv Gandhi rescued Indian national interest when he broke with the 1962 syndrome, and, after careful preparation of the ground, visited China in December 1988 to start (or, more accurately, restart) a process of reconciliation based on opening up the immense potential for India-China cooperation while placing the settlement of the border dispute on the basis of “mutual understanding and mutual accommodation (MUMA)”. This cut through the thicket of argument and counter argument that had grown over Aksai Chin, especially as MUMA would safeguard our security requirements better than keeping the dispute unresolved and thereby risking military confrontation that might snatch away what remains of our strategic control of the area.

Over three long decades, neither we nor the Chinese have carried to its logical conclusion the mutual adjustment, on the “MUMA” formula, of the alignment of the Line of Actual Control, let alone the border. If, since Shimla 1972, we have wanted to convert the Line of Control in Jammu and Kashmir into an international border, why cannot the sensible, practical, time-tested policy prescription of “flexible frontiers” in our northern reaches apply to Aksai Chin?