On May 9, The Indian Express carried two apparently unrelated Covid-19 stories on its front page. One reports the first information report filed by the Delhi Police against Maulana Muhammad Saad Kandhalvi, head of the Tablighi Jamaat, under section 304 IPC—“culpable homicide not amounting to murder”—for “allegedly going ahead with a gathering of around 2,000 people at the mosque”.

The other, under the headline ‘Tracking India’s Covid Curve’, says Gujarat has recorded 7,013 cases of Covid-19 infections, the second highest in India after Maharashtra, higher even than Delhi and Tamil Nadu, the other badly affected states. As the same chart gives the “doubling rate” in Gujarat as 12.38 days, by the time you get to read this column, the number of Covid-19 cases in Gujarat would have topped 10,000 and be inching its way towards 14,000. The same newspaper had reported on May 6 that “Ahmedabad has approximately 70 per cent” of the state’s Covid-19 cases. Add its sister-city of Gandhinagar, and one finds that the twin cities account for some three-quarters of Gujarat’s extraordinarily high rate of infection. 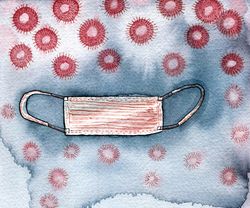 Cut to Ahmedabad-Gandhinagar, February 24, 2020. Does anyone need reminding that on that day US President Donald Trump and his first lady landed at Ahmedabad expecting to be received by seven million cheering Modi-bhakts? That was a hallucination. Newspaper and TV reports of the welcome place the number of those lining the streets, pushing against each other, and cheek by jowl at around one lakh. When the Trumps eventually reached the Sardar Patel Stadium, the “world’s largest cricket stadium” at Motera, Ahmedabad, estimates of the crowd packing the overflowing stadium (damn social distancing) ranged from one lakh to 1.25 lakh plus uncounted tens of thousands milling around outside.

January 22, 2020: The World Health Organization delegation visits Wuhan and concludes that “human-to-human transmission” of virus is taking place in the city.

January 26, 2020: President Xi Jinping, at the highest level in China, publicly confirms the world is now in the grip of a global horror not seen since the Spanish Flu of 1918-1919.

January 30, 2020: The WHO proclaims the outbreak as a public health emergency of global concern; first confirmed case in India.

There were still 25 days to go for Namaste Trump. Would not the prudent thing have been to set an example to the whole world by calling off, or at least postponing, the proposed Motera tamasha?

Yet, Narendra Modi and Trump went ahead without heed to what would be the inevitable outcome of such a huge gathering in the midst of a “global health emergency”. Indeed, Trump was so aware that the US was in the thick of the danger zone that within 24 hours of his return to the White House, on February 25, he sent a request to the US Congress for “emergency funds for coronavirus response”.

So, is this “Gujarat model” the explanation for Ahmedabad-Gandhinagar becoming one of the reddest of red spots?