As in a time of war, the Covid-19 pandemic should have united our country. Instead, the one-month lockdown has only aggravated communalism and class conflict.

The media’s premier godiwallah (lapdog) seized on the tragic midnight killing of two sadhus in Palghar, Maharashtra, to thunder, as if it were “breaking news”, that this country was 80 per cent Hindu and how it could tolerate the murder of two Hindu sants. This was despite the state government’s announcement that over a hundred suspected assailants—all Hindus—had been arrested. This viciously irresponsible anchor went on to scream that the Congress president would be scribbling a message to reassure the Pope that his work was being done in India. Why, he demanded to know, had she said nothing about this matter? Why had she not condemned this outrage on the Hindu religion? 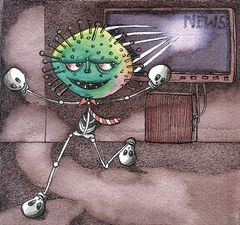 Why, one must ask, has this incarnation of communalism not been outraged in similar incendiary terms at the numerous lynchings of Muslims in the last six years? Why, indeed, has his hero—the prime minister—done next to nothing about reining in the sangh parivar’s motormouths and youth gangs who terrify the minorities?

To move from this devout Modi-bhakt to the media in general, how many channels have placed in a non-communal perspective about the Tablighi Jamaat gathering that caused a nation-wide spread of the virus—but, at the end of the day, a thin spread that has resulted in few fatalities? Why have they underplayed the question of how so many delegates from Covid-19-affected countries were allowed to foregather at the Nizamuddin Markaz for so many days, and how could this have happened when a police station actually shares a wall with the Tablighi centre? Moreover, what of the numerous written communications and face-to-face encounters between the Tablighi authorities and the Nizamuddin police, mostly related to requests from the former to be provided with transport to evacuate those who had come from far and near to attend the annual convocation? And what, in any case, had any Islamic injunction to do with the gathering not having vacated the premises before or after the declaration? And, how is it that the thickly populated basti (slum)—with majority Muslims—that surrounds the Markaz not turned into a particularly affected “hot spot”?

Compared with the gathering of thousands at the Markaz, there were swarming masses of lakhs of migrants at bus stands and railway stations. Why were those who allowed such gatherings not held accountable? And, strangely, why did those mammoth crowds not become coronavirus-spreaders?

And what kind of “social distancing” can be practiced where the most deprived live ten to a room? The strangest fact is that the coronavirus is not at its most virulent form among the poorest Indians. Apart from Dharavi, none of our urban slums (and almost nothing of rural India) has hit the headlines. When malaria, diphtheria, tuberculosis, flu, malnutrition and intestinal diseases routinely take most of the eight million Indians who die every year, the middle class and wealthy are indifferent, because most victims are the poor. It is because Covid-19 is no respecter of class distinctions, and because it has devastated the richest countries in the world, that draconian measures being taken are receiving wild applause from our elite.

The migrant labourer is responding: “We are not coming back to your cities. It is you who have brought upon us this calamity by flying to luxurious foreign destinations, and it is we the poor who are suffering the consequences”. Khabardaar (Be warned).