Pots, pans and the pandemic

If Narendra Modi had ever been really poor, his first thoughts on Covid-19 would have turned to the poorest and the weakest. But, as he has never really been poor, he plumped for drama and theatre instead of preparation.

He had plenty of notice of the global disaster in the offing. By early January, the Chinese had notified the world that Wuhan was no longer associated with Modi and Xi Jinping taking photogenic walks together, but was the infamous breeding point of a viral disease that would overwhelm everybody, everywhere.

But the BJP government’s attention was focused elsewhere, wondering what had hit them with youth and students in a hundred campuses venting their disapproval of the Citizenship Amendment Act. And the unprecedented spectacle, replicated country-wide, of thousands upon thousands of Muslim women emerging from the seclusion of their homes, to conduct for a hundred days and more a 24x7 relay protest, flouting all the stereotypes in the hindutva mind.

At the same time, Modi and his cohort were unleashing the likes of Anurag (“goli maro”) Thakur to wrest back Delhi. When that flopped, revenge followed with Kapil Mishra provoking a riot against Muslims in northeast Delhi, even as Modi’s energies were being absorbed in treating Donald Trump to a lavish mega-welcome. 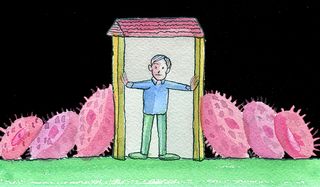 Then, just as the saffron brotherhood were recovering from their licking at the Delhi polls arose the golden opportunity of engineering defections in Madhya Pradesh. Blissfully unaware of the shenanigans in process in Bhopal, the director general of the World Health Organization raised the flag to full red on March 11, declaring Covid–19 a “global pandemic”. Kejriwal took cognisance on March 15. But Modi was otherwise occupied. He kept Parliament going on inane business only to facilitate the vote of no-confidence that would topple the Kamal Nath government.

When at last the prime minister was ready to face the facts, he had nothing to declare but a Janata Curfew and a meaningless clanging of pots and pans to show the nation meant business. Two days later, he was on television, again ordering a national lockdown in four hours flat with no preparations having been made to deal with the horrendous consequences. The army of migrant labour—some 45 crore strong—that runs Indian industry and on whose muscle and brawn Indian agriculture survives, were left to sink or swim.

They were not even noticed until they came swarming out to find their own answers to the tragedy that had befallen them.

The prime minister, in his harangue, gave no assurances of food and shelter. They were peremptorily instructed to “Stay at Home”, but when they tried going home, there was no transport to take them home. “Isolate yourselves”, they were ordered, and then forced into densely crowded bus stands and railway stations to wait for buses and trains that never came. And, then offloaded on to the highways where it was impossible to maintain “social distancing” norms as they walked hundreds of kilometres to the comfort of their families. So, brutal police force was unleashed to drive them back or away. And, if they went back to their overcrowded slums, or to the concentration camps organised by state governments, where could they find the space to keep a metre or more from each other? None of this was foreseen, nothing planned for.

And as for hospitals and beds and ventilators, all was ‘Ram bharosa’. For doctors and nurses on the frontline, no prior arrangements had been made for their safety in terms of kits, masks or personal protective equipment. They were just thrown, like migrant labour, to the wolves.