The 100-day protest at Shaheen Bagh is over, worsted not by the Narendra Modi government but by a force no one had anticipated—the coronavirus. What is the legacy it leaves behind?

First, it destroys the stereotype of Muslim women as a submissive breed, hooded and veiled, non-political, tied up with the kitchen and nurturing their children—unseen, unheard and unsung. Second, Muslim women have shown that they are capable of organising themselves, persistent, insistent, and demanding, ready to bear up to the rigours of the coldest winter Delhi has experienced in 117 years.

Third, Muslim men, in defiance of the stereotypes, were ready to accept the leadership of women and be content with a secondary role, serving food and water, guarding the periphery and letting the shrill voice of women drown out traditional male domination.

Fourth, the myth that Muslims know only their holy Koran has been shredded. For three long and wearing months, the pandal reverberated not with religious instruction and Islamic injunctions but with the full-throated ease of Muslim women declaring themselves and their kin to be Indian, and demanding their constitutional rights as Indians. Their slogans, shouted out with vigour, were irreproachably patriotic, and their hands were not waving the holy book but the holy tricolour. The heroes they invoked ranged from Mahatma Gandhi to Shaheed Bhagat Singh, from Jawaharlal Nehru to Subhas Chandra Bose, from Sardar Patel to Maulana Abul Kalam Azad. The texts they read and recited were not those prescribed by the ulema but the Preamble to the Constitution. The speeches were woven around their assertion of their Indian identity and their commitment to the Indian nation. There was no call for jihad, no appeal to violence, no attempt to hurt anyone’s religious sentiments and no provocation. 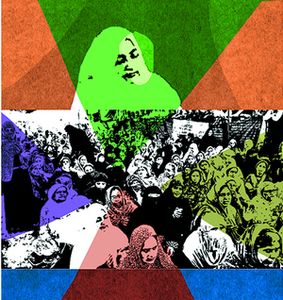 Fifth, not even the violence unleashed on their co-religionists in North East Delhi deterred them. As news came in of the massacre of over 50 persons and hundreds of casualties, even as the police looked away and politicians of a saffron hue were screaming, “goli maro saalon ko (shoot the scoundrels)”, the women of Shaheen Bagh remained unfazed. It was the establishment that blinked, failing over a hundred days to take up the challenge of meeting and talking to these women.

Sixth, Shaheen Bagh in New Delhi inspired mini-Shaheen Baghs in thousands of mohallas and at least a hundred campuses, attended by men and women of all faiths, ranging from adolescents to senior citizens, cutting across all classes, economic and social, stretching to every state and Union territory of the country.

Seventh, it was truly a people’s movement, sidelining political parties and standard political leaderships. Politicians generally kept away or were warned off. Civil society was taught that they do not have to wait upon the formal institutions of democracy—parliament, the judiciary or the executive—to raise their voices, and they can bend the establishment’s opinion to their will by taking and persisting with their initiative.

Eighth, Shaheen Bagh scored a great political and legislative victory when the prime minster backed off, claiming his government had not even discussed the National Population Register (NPR) and the National Register of Citizens (NRC), whereas his home minister had at least nine times on the floor of the house insisted that the Citizenship Amendment Act, the NPR and the NRC were inextricably linked. The government has been warned that if the initiative is renewed it would have to contend with the wrath of the people it is trying to divide.