Now that so many Congress luminaries have stirred the pot of our sorrows, may I throw my two ingredients into the witches’ brew? Their views may be summarised into two broad categories: the camp led by Shashi Tharoor that regards elections to all party posts as the prerequisite for the revival of the party; and the other school, led by Manish Tewari, who think more than an organisational revamp it is clarity in ideology through a series of Pachmarhi-style inclusive vichar manthans (think camps) that is the prerequisite for revival.

It seems to me that the two approaches are actually complementary. But I am more inclined to Tewari’s view. Otherwise, the old war horses with their superior hold on the party machine will triumph and the party will soon be back to the tired clichés and behind-the-curtain decision-making that have brought us to our present pass. 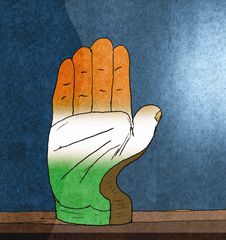 But more pressing even than organisational elections and Pachmarhi-type camps, it seems to me, is the necessity to set the compass for the party’s future trajectory by facing up to the key question: whether to aim for the restoration of the Congress as the “natural party of governance” by eschewing alliances, as was decided by consensus at Pachmarhi 21 years ago, or rationalising our actual post-Pachmarhi practice of seeking out allies (if we can find them—and we often cannot, at least not on our terms).

So, negotiations are more often than not initiated until very late because of the tussle between the leadership and aspirants at the grassroots over what number of seats (and where) to accept as a minimum, and when that minimum is not conceded to please the grassroots by petulantly fighting all the seats, even when it means losing virtually every seat contested, as in the Lok Sabha elections in Uttar Pradesh, or, as in Delhi NCR, losing our deposit in 63 of 66 seats contested and failing to win a single one!

If, instead, the tactical goal were set clearly and long in advance as defeating the BJP, whatever the short-term cost to the party’s aspirants, the chances of securing the strategic goal of reviving the party to become a real presence in the future would be more credibly realisable.

This the party has achieved in Kerala with the United Democratic Front, where fixed constituencies for the alliance partners and long-determined portfolios in the event of victory, have ensured not only a steady stream of victories over the rival Left Democratic Front in every alternate election, but it leaves the alliance partners completely free to nurture their separate identities and cultivate a larger section of the electorate between elections. Most important, the system marginalises hindutva.

Indeed, abstracting from immediate election imperatives and going back into its own history, I believe the only way the party can again become the formidable force it was in the freedom movement is to reinvent itself as a movement instead of remaining just another party. Such radical transformation requires the Congress to revert to its pre-Independence role as the principal motivator of a broad alliance of similarly motivated political entities. That broad alliance excluded only two forces—one, the forces of hindutva and, two, the agents of international communism. The latter have been domesticated and can quite easily be accommodated in a broad 21st century secular alliance. The former are as unacceptable today as they and their counterparts, the All-India Muslim League, were in the run-up to Independence.

There is only one way of keeping the hindutva forces at bay and that is to forge a long-term alliance platform that would stop the present alarming slide into the same kind of divisive communal hatred that led to the partition.