Alone among the politicians of pre-independence India, V.D. Savarkar, president of the Hindu Mahasabha, affirmed in Nagpur on August 15, 1943, that he entirely agreed with the president of the Muslim League, Muhammad Ali Jinnah, that there were indeed ‘two nations’ in India, a Hindu nation and a Muslim one.

Although Pakistan, as a nation based on religion, came into existence on August 14, 1947, the political leadership of independent India, heavily backed by the largely Hindu Indian masses, refuted the idea of India as a Hindu nation to hold that India, under its Constitution, belonged equally to all its citizens, irrespective of their religion. Till but the other day, the nation proudly asserted that while India was indeed home to the four-fifth of its people who were born into the Hindu religion, it was also home to one of the world’s largest Muslim populations. One could as little conceive of India without Islam as of Islam without India. Indeed, we were home to followers of every major religion in the world. 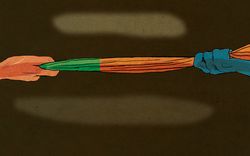 That was the India championed by all Indians of whatever religious persuasion other than the camp-followers of the two self-anointed ideological twins: Jinnah and Savarkar. With the creation of Pakistan, Jinnah won half his battle—a Muslim nation. But for close to seven decades, he seemed to have lost the other half of his argument: there was no Hindu nation on the subcontinent, only a secular nation, as proud of the Muslim contribution to her heritage as of the rest of its 5,000–year old composite civilisation to which every religious community had signally contributed.

When Savarkar’s associates killed Mahatma Gandhi, the Savarkar school of thought suffered a political setback. But the Union government that was elected in 2014 started the process of fulfilling the Jinnah/Savarkar proposition of ‘two-nations’ with bogus charges of sedition, particularly against Muslims, ‘love jihad’, ‘ghar wapsi’, and the lynching of innocent Muslims, all greeted by the sound of silence from the prime minister, and overlaid by sectarian hyper-nationalism (as in all fascist dispensations) and the subversion of secular studies and secular institutions.

After its second victory (with a slightly enhanced vote margin, secured through a somewhat enhanced share of the Hindu vote), the Modi government has greatly accelerated the process of fulfilling Jinnah’s prophecy of a Hindu India. In just over six months of its second term, it has assaulted the Constitutional provisions that provided for a special relationship with Jammu and Kashmir, the only Muslim-majority state in India, and heavily reinforced this with an enhanced military siege; singled out Muslim, but not Hindu Bengalis, with inadequate documentation for deportation and built huge internment camps in Assam, reminiscent of Auschwitz and Dachau, to hold hundreds of thousands of hapless Muslims (although almost as many Hindus without papers are going to be fast-tracked to citizenship); propagated a “right-to-return” doctrine for Hindus worldwide on the lines of Israeli Zionism; held a brilliant Modi critic, Aatish Taseer, responsible for having a Pakistani father; created an atmosphere in which the Supreme Court has decreed that although the wantonly destroyed Babri Masjid was for 450 years a Muslim place of worship, complete possession will now be given to those complicit in the barbaric destruction of the mosque for fear that otherwise they would cause trouble soaked in blood (as in Gujarat 2002); outrageously introduced religion-based criteria into our hitherto secular Citizenship Act; and are threatening to use their brute majority to bulldoze the country towards a Uniform Civil Code, undermining the Constitutional guarantee of a personal law for all communities.

I writhe as I hear Jinnah in his grave muttering,