I was at university in Delhi (1958-1961) when Chairman Mao undertook his Great Leap Forward, a disastrous attempt at driving China forward before his country had been readied for such acceleration. In consequence, an estimated 20 million people died of starvation; some reckon the loss of life touched 50 million. But I knew nothing of this because I was being nurtured by my closest comrades at college on a diet of hoax statistics propagated by the China Economic Review.

The Great Leap Forward collapsed into the chaos of the Cultural Revolution. Mao’s death followed by the rise of Deng Xiaoping put China on the road to spectacular double-digit growth—backed by reliable, meticulously calculated and carefully monitored numbers that rise and fall but consistently convey the confidence that measurements are accurate and, therefore, yield tangible lessons for the way forward. 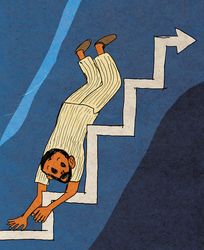 The tissue of lies that was the official story of the Great Leap Forward was contrasted by the work on the real story of the Indian economy as revealed by the pioneering work on GDP numbers of highly-rated scholars like V.K.R.V. Rao and P.C. Mahalanobis of the Indian Statistical Institute at Calcutta. Our ISI was among the most esteemed institutes of learning in the world. We, therefore, knew precisely where we were, how well or badly we were faring, and what course corrections were required.

Today, official data on the Indian economy is as confidence-inspiring as the China Economic Review of my (misspent) youth. Is GDP growing at 2 per cent, 4 per cent, 6 per cent or 8 per cent? No one knows. The cat was put among the pigeons by Narendra Modi’s former chief economic adviser, Arvind Subramanian of Harvard, who—pointing to the incompatibility of various figures put out for key sectors of the economy and the official estimates of GDP—concluded that the economy was actually growing at around 2.5 per cent less than what the Modi government was officially claiming. Controversial as this conclusion was, the nation was stunned into realising something was gravely amiss when the Modi government’s principal statistical officer resigned, humiliated by the government repudiating the figures his independent experts had conscientiously collated. It was for no better reason than that his department’s figures gave the lie to the empty boasts of the prime minister and his quacking brood of ministers.

Agriculture, the mainstay of the Indian economy, is in deep distress. Rural demand has collapsed because rural incomes have plummeted. The unemployment rate has spiralled to a 45-year high. Most segments of industry have slid into negative growth. More than half of our electricity generation capacity is idling for want of demand. Imports, too, are negative because manufacturing is in disarray. The idiocy of demonetisation has spread its destructive tentacles through the entire informal sector. Banking and other financial institutions are in the dumps. Real estate is at the bottom of the abyss. Therefore, employment-generating construction is stagnant. Even IT, which had once promised to take us to China-type double-digit growth, is caught in the coils of a recession. There is no export product booming, bar bovine products—and these are constrained by the lynch mobs unleashed by the saffron forces. Yet, the government remains in denial.

But, then, what is one to do about a leadership that cannot distinguish between plastic surgery and transplants; that thinks radar cannot penetrate cloud cover; that confuses relativity with gravity?