So, there is still life left in the old warhorse. The totally unexpected performance of the Congress on its own in Haryana and in alliance with the Nationalist Congress Party (NCP) in Maharashtra has shown that the obituary writers like Yogendra Yadav and Ramachandra Guha have got their timing somewhat wrong. Of course, so hesitant have we been in picking up the gauntlet, so confused in seeing our way forward, so leaderless these last five months that, quite understandably, the undertakers saw business coming their way.

They will have to wait a while for, although we lost in both states, it is clear that a substantial share of the voters has not given up on us. While the party has sometimes given the impression since our massive defeat in May 2019 that it has given up on itself, the crores of the electorate who do not find the answer in hindutva are urging us to wake up to the challenge. “Purush ho, pursharth karo, utho,” as the poet urged his countrymen and women during the freedom struggle. 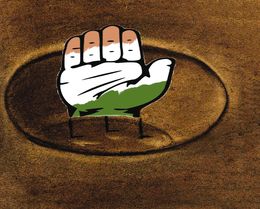 The Congress can still answer the call if it learns the right lessons from Haryana and Maharashtra. The lessons from the two states are, however, different because the objective political situation in these states is different. In Haryana, it was a straight fight between the BJP and the Congress. In Maharashtra, the NCP, on the one hand, and the Shiv Sena, on the other, constitute very powerful forces who could make or break the outcome.

Unfazed by the defeats in the last assembly polls and the 2019 Lok Sabha polls, former Haryana chief minister Bhupinder Singh Hooda waded into battle with confidence; he had the support of the high command against his rivals inside the party. Indeed, had that last-minute support been extended a few weeks earlier, he might even have pipped the BJP at the post. If it was not, it was partly because a search was on to see if there could perhaps be a replacement to Hooda, perhaps a younger face. There really was none, proving once again that it is not youth or age but the grip on the party that matters.

In Maharashtra, it was the restoration of the alliance with one who, after all, is one of us that did the trick. As at the time of writing, the incumbent BJP is discovering what it means to have a truculent partner. The Congress needs to gather to itself, either as constituent elements of the party or as alliance partners, all those who have drifted from it. That is the single most important lesson to learn from Maharashtra.

Recently, I received a poem my Pakistani poet-friend Fakir Syed Aijazuddin had written on October 9, 2019. I think it sums up the despair of Indians and Pakistanis of goodwill at our rush to mutual disaster: There was a time

Today, it speaks of yesterdays…

Where has the promise gone

Of brotherhood without frontiers?

Where are the tears we shed,

The blood to irrigate an earth,

Once yours, now mine,

Once mine, now yours?

Why must my only view of you

Be through the barrel of a gun?

Why must I search for you

In the debris of a divided sun?

How long will this daily suicide last?

Will we have separate Heavens there,

Or find ourselves sharing