No tears for turncoats

Kripashankar Singh and Urmila Matondkar have left the Congress. Big deal! The dogs bark, the caravan moves on. In Karnataka, some 14 Congress MLAs defected. Some 100 remained. Which is the bigger story? In any vibrant democratic political party, there will be comings and goings. Both the entrances and the exits will have all kinds of reasons: the most noble are ideological partings; the bravest are departures of conviction on issues of principle or policy; the most reproachable are defections of opportunism; the most despicable are those leaving for the love of lucre.

For 134 years, the Congress has coped with all these types of ups and downs. I myself come from Tamil Nadu. More than 50 years ago, the Congress was routed in the state. Whether it can return to Fort St George in the next half-century, only a jyotish can predict. Yet, it remains a player, the most significant player outside of the two principal Dravidian parties, sometimes wooed by one, sometimes by the other, sometimes shunned by both. 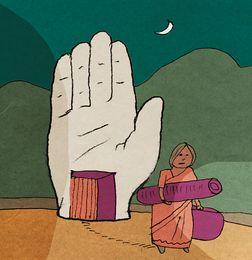 Electoral politics is a game in which, to paraphrase Shakespeare, one party in its life plays many parts. We have even survived the defection of the Tamil Maanila Congress in 1996 when almost all the recognised leaders of the Tamil Nadu Congress and the bulk of booth-level workers walked away with almost all the properties of the party. Yet, we survived, kept the flag flying in the gathering darkness and slowly, painfully clawed our way back. Eventually, it was not the Congress that merged with the TMC. It was the TMC that merged with the Congress. There has been the revival of a rump TMC, but it is struggling to survive.

The Congress has survived far bigger upheavals than the recent tremors: the split between the “Moderates” (led by Gopal Krishna Gokhale) and the “Extremists” (led by Lala Lajpat Rai, Bal Gangadhar Tilak and Bipin Chandra Pal) in 1907; between the No Changers and the pro-Changers in the 1920s; the chasm that opened up between Gandhiji and Netaji Subhas Chandra Bose in the late 1930s; the departure of the Congress socialists from the Nehruvian ranks in the first decade of Independence, followed by Rajaji and the Swatantra Party; the Congress (O) and the Congress (R) in the sixties; the post-Emergency divisions between the supporters and opponents of Indira Gandhi; the defection of V.P. Singh from Rajiv Gandhi’s side in the eighties that brought down the Congress government that enjoyed the largest parliamentary majority ever, but fizzled out when the defectors’ government ended less than a year later; the Tiwari Congress of the P.V. Narasimha Rao period, and many, many more upsets. The dribble now leaving the party is not a challenge but an opportunity—for cleansing the party of accumulated debris. The loyalty of a party member is never tested in victory; that is reserved for the aftermath of defeat.

So, what of the future? The basic challenge is not the retention of those who want to leave. Let them go. The basic challenge is how to distinguish ourselves from hindutva as we so easily did when we were winning but now have to do in defeat. The counsel of despair that advocates that we become more like them is a recipe for burial. This is the time for the reaffirmation of basic principles, not ideological adjustments to meet a fickle electorate’s transient moods. We can return to office only if the electorate knows that we stand for an idea of India that is radically different to the one now being peddled by Modi-Shah and their cohort. Why would anyone choose a B-team?