Merchant of lies on his way out

Narendra Modi has complained about being compared to Hitler. He is right. That is downright unfair to Hitler. For Hitler needed Joseph Goebbels to spread his big lies. Modi does it all on his own.

In 1987, Rajiv Gandhi called a meeting of the Island Development Authority in Kavaratti, the headquarters of the Lakshadweep group of islands. On a visit to Lakshadweep two years earlier in November 1985, he was shocked to find that virtually no Union minister or senior civil servant had ever visited the islands, nor had the Planning Commission attempted to integrally relate environmental and ecological concerns into development plans for the archipelago. 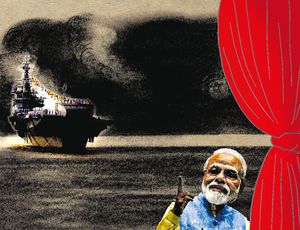 Moreover, given that the 1982 United Nations Convention on the Law of the Sea had granted an exclusive economic zone up to a radius of 200 nautical miles from the coast, there was a vast area available for us in the seas around Andaman and Nicobar and Lakshadweep to exploit the massive resources of the sea and the seabed for the benefit of the country, with the islanders being the prime beneficiaries.

There was also the strategic imperative that with the Indian Ocean emerging as a hotbed of international naval rivalry, ranging from the US and the Soviet Union to China, the island people had to be co-opted by being made to feel that New Delhi was really concerned about their growth and welfare. Finally, notice had to be taken of Pakistan casting a covetous glance at Lakshadweep owing to its population being cent per cent Muslim.

In Andaman and Nicobar, apart from the aboriginal tribes of the Andamans and the Polynesian-origin scheduled tribes of the Nicobar islands, national integration required a special outreach to the Bangladeshi and Burmese refugees who had settled in the Andamans, as also the Sikhs who had founded Govinda Nagar and other such villages in the island of Great Nicobar.

The Island Development Authority met in Port Blair in December 1986 and in Kavaratti in December the following year. Admiral L. Ramdas, the flag officer commanding-in-chief, Southern Command, and later chief of naval staff, has certified that only Rajiv and his good lady were on INS Viraat as it sailed out of Thiruvananthapuram to watch the naval exercises planned months earlier. All the rest—cabinet ministers, senior officials, the PMO staff and Rajiv’s guests for a holiday on the Lakshadweep island of Bangaram—followed in Pawan Hans helicopters on commercial terms. There were no foreigners on Viraat on that voyage (although Modi’s favourite interviewer, the film star Akshay Kumar, did board an Indian Navy vessel under Modi’s watch despite being a Canadian citizen!).

What IDA achieved was spelt out by Rajiv at a public meeting in Kavaratti on December 29, 1987. Rajiv spoke of the two-tier council being set up, one for each island topped by one for the islands as a whole; doubling the annual plan outlay; a corporation to open out new markets for Lakshadweep fish, protect traditional fishing and augment supplies of live bait; an integrated telecom plan; high-speed vessels for inter-island traffic and helicopter services to connect populated islands; the ongoing work on the airport at Agatti; establishing industries such as aerated water, fish pickling, rice and wheat grinding mills; employment opportunities in the merchant and regular navy; satellite search for fresh water sources; the Navodaya Vidyalaya he had just inaugurated in Minicoy; and sports and vocational training—bread and butter issues, not the political fibs that are Modi’s stock-in-trade.

That is the test of a prime minister of the people. Modi is certainly not. Hence, he is on his way out.