It would require Aeschylus, not a mere columnist, to tell the full tragedy of Mehbooba Mufti. I used to see her fairly often in Parliament and on the seminar circuit before her father died and she took over the reins of the Jammu and Kashmir Peoples Democratic Party. I always thought she was the one Kashmiri leader who could actually reconcile Kashmir with India for she displayed a wondrous empathy with what drove Kashmiri discontents, and more especially the youth, to rage and stone-pelting.

Tragically for her, her father, the very personable Mufti Muhammad Sayeed, decided in his last days to tie up with the BJP to go to his rest as chief minister, J&K. Mehbooba felt obliged to honour her father’s commitment, but was shrewd enough to force a joint commitment to their Agenda of Alliance [AoA] that promised to reach out to the malcontents, even the Hurriyat. Indeed, had that document been honoured, Mehbooba might have gone down in history as the best chief minister that J&K has seen. Alas, the BJP honouring their commitment to their saffron agenda has resulted in Mehbooba and her party being reviled in the state.

Her pledge to bring to book the goons of saffron persuasion, who raped and killed a little child, has not added to her standing. The rapists were then, most shockingly, backed by BJP ministers in Mehbooba’s government. The BJP have appeased her by getting the two ministers concerned to withdraw, but have given no assurance that they will treat the AoA with any more respect than they have displayed so far. For, to honour the AoA would be to dishonour their saffron agenda. 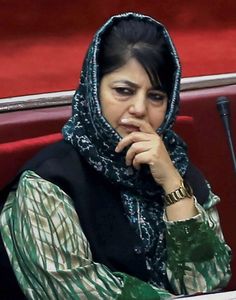 Mehbooba is as sincere in her endeavours at reconciliation as her BJP partners are insincere in keeping their word. Then, why does she stick with them when it is evident that every day the partnership continues, her credibility gets further eroded and her final defeat in the next J&K elections is assured?

The strange answer is that Mehbooba is in thrall to Modi. She believes Modi is the only national leader who has it in him to enforce the decisions that will give Mehbooba and her party a further lease of political life. But, that would go so completely against Modi’s ideological grain that it leaves Mehbooba stranded in fool’s paradise.

Moreover, she is at a grave political disadvantage when it comes to her party’s relationship with Kashmir’s fractious politics. The divide between the Hurriyat and the non-Hurriyat forces is not the only gulf in Kashmir’s internal politics. There is also the divide between the Abdullah and Mufti families that bubbled to the surface when, in protest against the Farooq-Rajiv entente cordiale, Mufti sahib walked out of the Congress. It so happened that I was sitting with Mufti sahib in the outer office as he waited to meet Rajiv to bid him his last political goodbye. The deep sorrow etched on the mufti’s face remains etched in my memory.

Thus, with neither the National Conference nor the Congress available (or so she thinks) to back her, she prefers to throw in her lot with Modi, the Strong Man. That is a forlorn hope, for Modi will never do her bidding. He has no seats in the valley. His entire strength lies in Jammu. Mehbooba, for her part, has some token seats in Jammu, but her political base lies in Kashmir, especially south Kashmir around Anantnag. Yet, it is precisely there that Kashmir is burning.

If only Mehbooba would see that expediency and opportunism are no substitute for principled politics, and she stopped being mesmerised by personality politics, she and her party might yet endure. She might even fulfill the destiny that awaits her. Alas, she does not see that, and, so, leads her party in a lemming-like rush to certain electoral disaster.