The west has glorified Zelenskyy into a mythical hero. But the west can also be notoriously opportunistic, says Anita Pratap

When hotlines replace redlines, it is time to worry… and hope. US decisions to communicate directly with the Russian military and suspend scheduled intercontinental ballistic missile tests are not admissions of defeat. They are Code Red, signalling that Russia’s war in Ukraine has turned extremely dangerous.

This war began slow, but has become brutal and ruinous—with malls, utilities, apartments, offices and schools being bombed. Russian President Vladimir Putin put his nuclear arsenal on alert, and his Foreign Minister Sergei Lavrov warned: “The Third World War will be nuclear.” There was no radioactive fallout, but explosions in Europe’s largest nuclear plant in southern Ukraine raised mushroom clouds of fear. Putin fancies himself a modern “Peter the Great”. But in European consciousness, Russia’s leader is now “Putin the Terrible”. 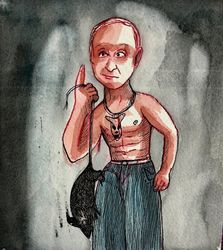 US President Joe Biden’s critics accuse him of appeasing Putin, as British Prime Minister Neville Chamberlain did with Hitler. But, by establishing hotlines, Biden has displayed restraint and wisdom which would help “prevent miscalculation, accidents and escalation”. These foster hope. As historian Barbara Tuchman said, “War is the unfolding of miscalculation.”

A Putin story that Washington, DC, is familiar with dates to his childhood when he lived in a rat-infested neighbourhood in St. Petersburg. Putin describes how courageously a cornered rat fought back, throwing itself at its tormentor, ten times its size. Cornering nuclear-armed Putin is dangerous.

Still, without firing a shot, the west has cornered Putin financially and economically. Europe joined the US in responding to Russian aggression in Ukraine with astonishing solidarity, speed and steel. Countries broke taboos to pledge lethal aid to Ukraine. This would have surprised Putin who sees liberal Europe as divided and weak, too soft-hearted, soft-headed and soft-bellied for tough fights.

From his underground bunker, Ukrainian President Volodymyr Zelenskyy broadcasts his nation’s peril. He urges the west to defend Ukraine, otherwise Russia will target the Baltic countries next. But Putin is unlikely to invade NATO members. Zelenskyy warned of a “nuclear disaster” and blasted NATO for not declaring a no-fly-zone over Ukraine to block Russian bombers. But shooting Russian planes would put NATO at war with Moscow and NATO will not go to war for a non-member country. A frustrated Zelenskyy is becoming desperate.

The west has glorified Zelenskyy into a mythical hero, courageous in the line of fire. But the west can also be notoriously opportunistic, discarding assets after they have served their purpose. In great power politics, local heroes are expendable, some consigned to junkyards, others to graveyards—in Afghanistan, Libya, Iraq. Lest one forgets, the US had armed Saddam Hussein, who fought Iran with chemical weapons in the 1980s.

In 2015, John Mearsheimer, a leading American geopolitical expert said, “The west is leading Ukraine down the primrose path and the end result is that Ukraine is going to get wrecked.” Tragic images from today’s Ukraine prove his foresight. The headline from a recent press conference by NATO Secretary General Jens Stoltenberg was his warning: “This war will get worse.” A revealing sentence lay buried in his speech: “We are not part of this conflict, and we have a responsibility to ensure it does not escalate and spread beyond Ukraine.” Hotlines, a Cold War legacy, seek to achieve this. But the primrose path ends in rubble.