That laugh could cost him the top job. Armin Laschet was in the lead to win the September 26 elections to become German chancellor and step into Angela Merkel’s shoes. But then he laughed at the wrong moment. His shoulders shook with mirth as he stood in the background and chatted at an event condoling victims of the recent devastating floods.

The inappropriate laugh went viral. Laschet apologised profusely, but the damage was done. His centre-right Christian Democratic Union of Germany began sinking in the polls, enabling the centre-left Social Democratic Party (SPD) to overtake and emerge the front runner. 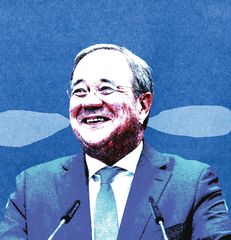 Voters are angry. And fearful. A 2019 survey showed that Germans were least anxious in decades. But last year, they feared Donald Trump. This year, they worry about the consequences of the swelling pandemic-induced public debt, totalling an all-time high of €2.2 trillion. Germany is famous for its balanced “black” budgets, which have given citizens the comfort of financial predictability.

To offset this deficit, people now expect tax hikes, rising cost of living and welfare cuts. “The mountain of debt which has piled up at the federal, state, and local levels to deal with the coronavirus pandemic is causing Germans the greatest worry this year,” said Brigitte Römstedt, head of this annual “fear study”. Römstedt clarified that Germans are not inherently fearful. They respond to real, not imaginary, threats, worrying about unemployment only when there are layoffs or about terrorism after 9/11. As long as climate change was abstract, people did not worry. But now 69 per cent do after seeing the disturbing images of the recent floods.

But people’s anxiety over public debt is not reflected in this election campaign. It’s not a feel-good issue and requires painful remedies. “The parties have successfully hushed up the issue,” says political scientist Manfred Schmidt. It’s easier to run divisive, demonisation campaigns.

As ratings fall, hysteria rises. Seeing power slipping from their grasp, the ruling conservative CDU is ratcheting up the rhetoric against their former coalition partner SPD, which could form post-election alliances with the socialist left and green parties. Laschet says the “radical left” weakens German security because they oppose foreign military deployments and the purchase of armed drones.

But riskier are the cyberattacks targeting to influence the election outcome by spreading disinformation—a sinister reminder of the 2016 US election meddling that contributed to Trump’s victory. German authorities protested sharply against alleged Russian attempts to hack data of local politicians to spread fake news and smear campaigns—as they have allegedly done in Poland and the Baltic states. German prosecutors say hackers from the group “Ghostwriter”, linked to Russian military intelligence service GRU, have been trying to breach private email accounts of parliamentarians and state legislators. A foreign ministry official described Russian actions as “a danger to the security of Germany and to the democratic will-forming process.” Berlin accuses the GRU of hacking the network of Germany’s lower house of parliament in 2015.

Due to Germany’s proportional representation system, coalitions are needed for securing the majority to rule. But this is a tricky and time-consuming process. In 2017, it took six months to cobble together a governing coalition. The SPD has the lead now, but it is difficult to predict the next coalition combination because polls can get it wrong. Laschet has not given up and the SPD leader Olaf Scholz is not complacent. Both fight hard in the last lap, keen to have that last laugh.