He is the new Scandinavian Superman, tall, dark-haired and handsome. Karsten Warholm, 25, does not fly, but he runs like the wind, winning “the best race in history”. As he crossed the finish line at the Tokyo Olympics, Warholm looked up at the scoreboard and gasped in astonishment. Cameras immortalised his face as he roared in joy, ripping apart his t-shirt. “There is no perfect race. This is as close as it gets,” he rejoiced.

Warholm had just smashed the “speed barrier”, becoming the first man to finish the 400m hurdles in under 46 seconds; in 45.94 seconds, to be precise.

Colin Jackson, BBC’s sports commentator, exulted, “This is one of the most outstanding world records. I am sure it will live longer than me.” Warholm broke his own world record of 46.70 seconds set two months ago at an Oslo race. That had shattered Kevin Young’s 29-year-old Olympic record.

Warholm’s Tokyo Triumph is testimony to his grit. The hunger to win began burning when he was eliminated in the 2016 Rio de Janeiro Olympic semi-finals. For 1,812 days he went to bed, slept, dreamed, awoke, ate, trained and ran with just one thought in his head—win gold in Tokyo. Asked what he owed his success to, Warholm says, “I had my own drive, I had my own flame.” 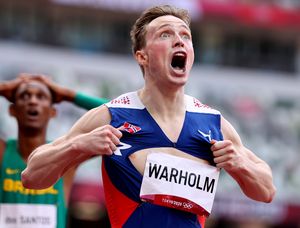 His success is also testimony to Norway’s unique sports model that abhors commerce, competition and above all, pressure. Exceptions are few. Until 12, children are not even graded. They are shielded from pressure—from parents, teachers and the system. Allowed to just be, without the pressure to compete and made to feel inferior or superior, children veer naturally to what they like, whether it is art or athletics, mathematics or music. What they choose and how far they wish to pursue it comes from within.

Little flames are lit and some carry it to the peak of excellence. Says Warholm, “I like the Norwegian sports model. I think a lot of people can learn from it. I never felt any pressure.” Norway’s sports system is well organised down to the village-level. Young talent are selected, given world-class facilities, coaching and training. Norway is in contrast to the US and Britain where sports funding is linked to medals, leading to terrific triumphs, but also high stress, bullying and breakdowns.

Born with “skis on their feet”, Norwegians excel in the winter Olympics, ranking first in 2018 with a record haul of 39 medals. The achievement is extraordinary as Norway has a tiny population of 5.4 million, comparable in numbers to a Delhi district.

Focusing on what is good for the child—not the school or parents—is integral to Norwegian philosophy. But this sometimes creates conflicts, especially with immigrant parents from different cultures. Like family, even the fisheries policy prioritises the wellbeing of the fish, not the fishermen or industry. This focus has revived depleted seas, resulting in abundant fish and richer fishermen. Fish is Norway’s second largest source of export revenue, second only to oil and gas.

But Olympic victory is today’s headline. Norwegian commentators are already discussing Warholm’s existential dilemma: What next? Wondered sports analyst Erlend Nesje, “More of the same is hardly motivating. What’s he going to dream about now?” Even as the Viking Superman emblazons the “Norwegian Way”, the quest for excellence fans his inner flame. Says Warholm, “I will keep running. The next is best.”