It was catchy, but the world was baffled by Donald Trump’s “Make America Great Again” slogan. Wasn’t America great already? But the message was coded: assert white dominance in a country “degraded” by diversity. So the demagogue demonised the “other”—Muslims, Mexicans, Africans and gays. But “otherising” is not new to the Republican Party aka Grand Old Party (GOP).

From its inception in 1854, the GOP was infamous for its violent antagonism towards impoverished Irish immigrants. Discrimination against the Chinese, Japanese and East European immigrants followed. 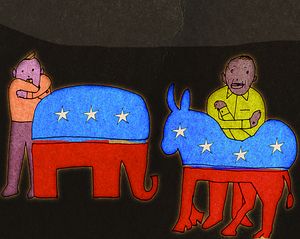 Author Steven Jonas predicts, “Either this nation shall kill racism, or racism shall kill this nation.” Long before Trump, white antagonism seethed against the liberal elite for “stripping” away their racial, cultural, national and economic superiority. Racial anxiety fused with resentment of feminism, gay rights, secularism, immigration, globalisation, stagnant wages and dwindling opportunities. The solution: not upgrading oneself but “degrading the other”. The most virulent manifestation of hounding the “other” was Republican senator Joseph McCarthy’s witch hunt of communists in the 1950s. Renowned journalist Walter Lippman wrote McCarthy’s goal was to become the GOP’s feared “supreme boss,” brazenly demonstrating “he respects nobody, no office and no institution, and that everyone at whom he growls will run away”. Reputed historians say the GOP’s response to Trump mirrors the party’s response to McCarthy, whose biographer Thomas C. Reeves observed, “Republicans rallied behind McCarthy even though most understood that his allegations were fraudulent.” Just as they know Trump’s election fraud charges are fraudulent. Republicans surrendered to McCarthy because McCarthyism reaped votes for the party. They made huge gains in the House and Senate in the 1950 mid-terms and a landslide in the 1952 presidential polls. The GOP believes Trumpism will do the same, starting with mid-term elections next year. One reviled man links McCarthy and Trump. Lawyer Roy Cohn, McCarthy’s vicious aide turned Trump’s mentor. Critics have labelled Cohn a “snake”, a “Machiavellian” and “a new strain of son of bitch”. Cohn used cunning and villainy to dodge scandals and indictments involving tax evasion, stock swindling, bank fraud, bribery, blackmail, extortion, forgery and perjury. Trump was 26 when he began cultivating the feral fixer. Columnist Frank Rich says, “You can see and hear Trump in Cohn’s ruthless bullying and profane braggadocio.” Cohn’s hypocrisy was astounding. He flaunted anchorwoman Barbara Walters, the “fiancé” he never married. He savagely threatened to expose and shame closet “fags”. But he died of AIDS in 1986. “Lie and Attack” was his mantra. The New York Times editorialised, “Mr Trump has spent his career in the company of developers and celebrities, and also of grifters, cons, sharks, goons and crooks.” Mainstream mocks, but the fringe flocks. The far right is a minority, but forms the vocal Trump base in the GOP, which attracts disgruntled white voters but alienates most others. The Republican party’s dilemma is that demographically, the “others” are outnumbering the whites. Elections will not perpetuate the party of white identity in power. So they counter by redrawing constituencies and introducing laws in GOP-ruled states to disenfranchise “others”.