ZEB2 is the mastermind determining the size of the brain: Anita Pratap

A two-day delay, a giant leap for humankind. Cambridge researchers have discovered that a 48-hour lag in the activation of a gene resulted in a bigger human brain.

The development of a big brain was the Big Bang moment in human evolution, the moment when we diverged from the apes, about five million years ago. The rest, as they say, is history.

Thanks to our big brain, here we are today, enjoying the best that life can offer, living in packs safely in skyscrapers, hunting for food even more safely in supermarkets, averting life-threatening situations by looking at both sides of the street when crossing, composing symphonies, doing math and spinning new technologies that take us into deep oceans and outer space. Were it not for that two-day fateful delay, we would still be foraging in faraway forests and swinging from trees like chimpanzees, our closest living relatives.

Our magnificent yet mysterious brain is three times bigger than that of the apes’. But size is not idiot-proof. Charles Darwin observed, “An American monkey, after getting drunk on brandy, would never touch it again, and thus is much wiser than most men.”

Still, a larger brain is more intelligent and processes information more efficiently. But the mechanics of the momentous expansion of our brain has largely been unknown.

To understand this least understood organ, scientists used stem cells from humans, gorillas and chimpanzees to create pea-sized versions of their real brains in the laboratory. These “mini-brains” called “cerebral organoids” are rudimentary cell fragments of the brain that imitate its characteristics. Of course, mini-brains are not perfect representations, underscoring the complexity of the real brain. 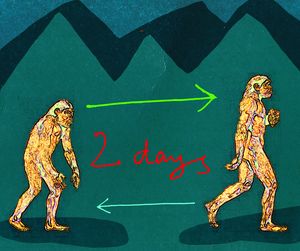 Four weeks after conception, an embryo’s general-purpose, cylindrical stem cells change shape. They become conical as they convert into specialised brain cells or neurons. The window for this conversion is five days in apes, but in humans it is seven days. The extra two days gives time for more stems cells to convert into neurons, resulting in a larger brain. Says Madeline Lancaster, who led this research team at Cambridge MRC Laboratory of Molecular Biology, “It is remarkable that a relatively simple evolutionary change in cell shape could have major consequences in brain evolution.” Her findings were published in the peer-reviewed scientific journal Cell. Lancaster created the world’s first mini-brain in 2013.

The Cambridge researchers solved a key puzzle: the seven-day window was caused by the delayed activation of a gene called ZEB2. When they delayed this gene’s activity with chemicals, gorilla mini-brains grew larger, like human ones. When they switched on ZEB2 earlier in human mini-brains, they became smaller, like the apes’. Evidently, zany ZEB2 is the mastermind, determining the size of the brain—and thus the creature’s fate. Case solved.

Not so fast, say scientists. Humans are yet to crack the brain code. ZEB2 is the master regulator, switching on and off other genes. But what switches on ZEB2? A super mastermind, a genetic mutation or an evolutionary accident? That is probably a mystery for the next generation of scientists to solve. For now, Lancaster is thrilled with the outcome of this pioneering research. She says her findings take us closer to understanding “What makes us human?” For non-scientific mortals, it is hard to fathom what is human about organoids and ZEB2, though delays are utterly and understandably human. The giant leap in her understanding, is alas, one more step in our incomprehension. The mother of mini-brain clearly has a bigger brain.