From grace to grass

He was the man who could be the president of the United States. Now he is disgraced, contrite and cringing, a diminished version of the Colossus that strode the planet’s most exciting city. New York State Governor Andrew Cuomo, 63, is accused of sexually harassing five young women. Four of them had worked for him. He apologised for causing “unintended offence” and insisted: “I never touched anyone inappropriately”. That only reminded everyone of Bill Clinton’s infamous claim, “I did not have sexual relations with that woman.” Clinton was impeached, not for sexual relations, but for lying.

Cuomo swears he was not making advances, merely greeting in his customary, “playful” manner. He is of Italian descent and Italians are customarily effusive in their greetings. Long ago, he had wisecracked, “As my Sicilian grandfather used to say, you get more flies with honey than with vinegar.” The tough-guy governor is known both for his harm and charm offensives, using his power to punish foes and promote friends. An ageing alpha male touching 25-year-olds in any manner is controversial, not customary; prurient, not playful. The same age as his daughters, the complainants accuse Cuomo of kissing, stroking bare backs and making lewd comments.

Cuomo’s marriage to Robert F. Kennedy’s daughter Kerry ended in divorce in 2005. His relationship with celebrity TV chef Sandra Lee ended in 2019. Aide-turned-accuser Charlotte Bennett alleges Cuomo propositioned her in his office, prattling about “looking for a girlfriend” because he was “tired” and “lonely”, moth-eaten ploys used by powerful men to prey on pretty women. Cuomo is now under investigation. 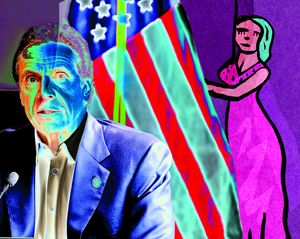 Like his father, Cuomo is a three-term New York governor and has implemented popular progressive policies: fighting climate change, passing the strictest gun control laws in the US, raising taxes for the wealthy, reducing it for the middle class, equalising wages and providing free tuition for the underprivileged, among others. During the early months of the pandemic, Cuomo was the polar opposite of President Donald Trump: in-command, coherent, visible and taking tough, data-driven decisions. That is when his supporters began to extol him as the most effective Democratic presidential candidate to take on Trump.

But that is also when Cuomo’s enemies got activated. He himself has said: “I am sort of the Antichrist to the Conservative Party.” Republicans first pounced upon the scandal over his aides hiding Covid-19 deaths of the elderly in nursing homes. The sexual harassment charges came as a bonus. But Cuomo also has rivals within, most notably, the Democratic Mayor of New York City, Bill de Blasio. Sprawling New York is not big enough for the oversized egos of these two feuding men. After the sex scandal erupted, de Blasio called Cuomo’s alleged behaviour “grotesque,” “perverse” and “terrifying”.

As if enemies in the Republican and Democratic parties are not enough, Cuomo can be his own worst enemy. Detractors accuse him of abrasive, aggressive, arrogant behaviour. “I am the government,” he has pronounced to his critics’ annoyance. His younger brother, CNN anchor Chris Cuomo, once said on-air while interviewing him, “No matter how hard you are working, there is always time to call mom.” The national fame garnered by his riveting televised pandemic press conferences has made him feel “he is untouchable”, says Bennett. Hubris probably contributed to Cuomo’s travails.

Cuomo is now a wounded lion. He may wind up as the man who would, not could, be president. The investigation’s outcome will determine whether he can even cling on as governor.