The race is on. Across the world, countries rush to vaccinate their citizens against Covid-19. But some nations, especially the US, face a stumbling block: public mistrust of vaccines. The “anti-vaxxers” are motivated by deep-rooted suspicions, ranging from historical experiences to religious beliefs to conspiracy theories. Worries popular US epidemiologist Anthony Fauci: “There is a general anti-science, anti-authority, anti-vaccine feeling among some people in this country.” Herd immunity cannot be achieved when so many millions are hostile to vaccines.

“American health care’s racist history has helped fuel a fear of vaccines,” notes investigative reporter Olivia Goldhill. The US Public Health Service conducted a 40-year experiment, which ended in 1972 in Tuskegee in rural Alabama, denying antibiotics to 399 black men. The purpose was to study the progression of untreated syphilis―condemning the men to slow, painful deaths from infected sores, dementia, paralysis and organ damage. Author of Medical Apartheid, Harriet A. Washington observes: “Tuskegee is the most famous, but there are many other less-known medical atrocities conducted by the government.” These include invasive gynaecological procedures without anaesthesia and sawing a black baby’s skull to study epilepsy. 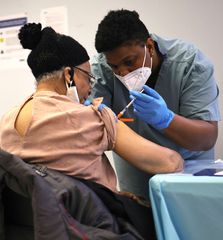 Other western nations, too, conducted unforgivable experiments in their colonies. During the 1930s in Rawalpindi, British army scientists tested the effect of mustard gas on the brown skins of 20,000 local men and women. In the mid-20th century, thousands of poor black women were secretly sterilised in procedures labelled “Mississippi appendectomies”. Suspecting the authorities’ intentions, many black families rejected polio vaccines.

The African Americans’ historical fear of the vaccine is completely different from the contemporary fear-mongering by white supremacists and other anti-vaxxers who ceaselessly spin contradictory conspiracy theories: the vaccine causes disease; it will alter your DNA; China unleashed this “bioweapon” to conquer the world; Covid-19 is a hoax; Bill Gates has embedded a microchip in the vaccine that connects through 5G technology to mobile phone towers, enabling the government to watch you.

Perverse imaginations know no limits. But they instigate real reactions with believers damaging vaccine vials and cell phone towers. Religious fundamentalists spin their own yarns, condemning vaccines as “unnatural” and “devil’s spawn”. The changing findings of science do not help. Quips sociologist John Gagnon: “The difference between a scientific theory and a conspiracy theory is that a scientific theory has holes in it.”

Racism is neither a conspiracy nor a scientific theory. It is a political fact. Even today, death rates from breast cancer are 40 per cent higher among black than white women; four times more black women die in childbirth. Says genetics professor Terence Keel: “African Americans have been systemically disenfranchised from the health care system in this nation. This is not lost on them.” Communication experts suggest winning the trust of the African-American community with pro-vaccine campaigns featuring black celebrities. But activists say watching a needle jab into the arms of sports or entertainment stars is not going to cut it.

Both black and white doctors perpetrated the syphilis experiment involving a historically black university and conducted it with the help of 120 black medical students. These horror stories are as deeply embedded in the African-American psyche as the chronicles of slaves and torture. Writes journalist Dahleen Glanton in the Chicago Tribune: “Tuskegee has long haunted African-Americans. Now it has circled back to haunt America. Do not blame African-Americans for fearing the Covid-19 vaccine. Blame America.”