The only thing that stops a bad guy with a gun is a good guy with a gun,” says Wayne LaPierre, the head of America’s formidable gun lobby, the National Rifle Association (NRA). Diehard Donald Trump fans, the NRA is mobilising to get him re-elected—buying ads, organising events and pushing their five million members to vote. In 2016, they spent $30 million for Trump’s election.

Surveys show 60 per cent of Americans want stricter gun laws—including banning automatic weapons and proper background checks on gun buyers (mostly rural white men). But the NRA has successfully resisted restrictions by invoking the US Constitution’s Second Amendment that guarantees the right to bear arms. They tenaciously lobby Congressmen and cleverly equate gun ownership with freedom. Americans fancy they are the freest in the world, ironic given that they are enslaved by debt, materialism, corporate tyranny and notions of exceptionalism. 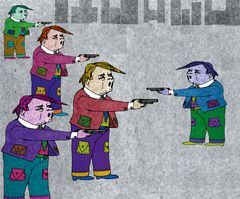 Long before Trump’s “fake news” and “alternative facts” went viral, the NRA shamelessly propagated fake analysis and alternative history. NRA leaders claim the association was established to train black Americans to defend themselves against the Ku Klux Klan. There is “zero” evidence of this, reveals award-winning author Frank Smyth. But that does not stop the NRA from proclaiming it is America’s “longest standing civil rights organisation”.

Foundational myths proliferate. LaPierre, 71, asserts “Shooting is in America’s blood. It’s what Americans have always done.” The NRA’s real history is that a group of US army veterans were ashamed that Americans “could not shoot straight”, especially compared with the Europeans. So, they went to London in the 1870s and modelled their organisation on the British Rifle Association that promotes marksmanship.

NRA mythology spins that history would be different if only there were enough good guys with guns: no holocaust, because armed Jews would have fought the Nazis. More guns, less genocide: had they been armed, victims could have counterattacked Adolf Hitler, Joseph Stalin, Mao Zedong, Idi Amin, Robert Mugabe and Pol Pot. Martin Luther King Jr could not defend himself because he was denied a gun permit.

Even if these arguments lack common sense, they are backed by sound financial sense. Threat perceptions drive membership and gun sales. Gun manufacturers contribute 60 per cent of the NRA’s income. Gun sales are now skyrocketing to two lakh a day due to high threat perceptions triggered by the pandemic and racial violence. There are already at least 400 million civilian firearms in the US (population: 330 million). In most states, gun shops are open because it is an “essential service”.

After the 2012 Sandy Hook school carnage in which 27 people, including 20 six- and seven-year-olds, were gunned down, LaPierre blamed mental illness and video games for the rise in gun violence. His solution: put armed guards in every school. Even Rupert Murdoch’s newspapers called him a “Gun Nut.” After the 2018 Florida school shootout that killed 17, La Pierre’s solution: arm schoolteachers. He blamed the FBI, media and gun control “elites”.

Multi-millionaire LaPierre, who has headed the NRA for three decades, epitomises the elite—private jets, luxury cruises and African safaris; his wife, Susan LaPierre, ran up a $16,000 tab with her hairstylists. But now New York Attorney General Letitia James has filed a case, accusing LaPierre of corruption and using the NRA as his personal piggy bank.

Sometimes, the only thing that stops a bad guy is a good girl.