The dystopian world of artificial intelligence that we imagined would unfold in the future is already here. Or, at least a hybrid version with humans and AI working together, but where humans are not always in control.One “enemy”spawning and spinning this dystopian world is the global financial market, says San Francisco-based internet guru Tim O’Reilly. “The market is on its way to becoming that long-feared rogue AI, enemy to humanity, a machine that its creators no longer fully understand,”he said. Problematically, the financial market is disconnected from the real economy of goods and services that it was originally created to support. An example of this disconnection is the stock market rally and Apple’s astronomical $2 trillion valuation in the midst of an economically devastating global pandemic.

The “market”, nicknamed “Wall Street”, does not factor in livelihoods, indebtedness, inequalities, pollution or resource depletion. Predator Wall Street preys on High Street for profit and productivity. Says O’Reilly, “We are engaged in a battle for the soul of this machine, and we are losing.” How the global financial market evolved into an AI-accelerated web is testimony to humans imitating nature. We, instinctively, associate AI with robots. But, an AI ecosystem is similar to a forest’s biosphere, our brain’s neural networks or our gut’s microbiome comprising the vast ecology of interconnected microorganisms. Billions of humans store and share information every second on the internet, creating a technology-assisted global human-machine hybrid brain. We now live in the womb of this AI ecosystem. This collective super intelligence is designed, directed and amplified by algorithms. More than 50 per cent of the stocks are now traded by algorithms because humans cannot compete with its speed. The time advantage of a high-speed trader is one millisecond. Says best-selling author Michael Lewis, “It takes 100 milliseconds to blink. So, this is a fraction of a blink of a human eye. But for a computer that’s plenty of time.” High-speed trading and complex investment instruments such as derivatives (that caused the 2008 global meltdown) pull financial markets beyond human grasp and control. 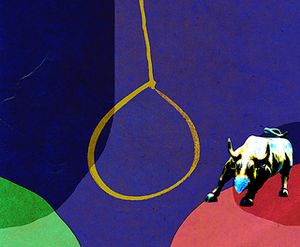 Says O’Reilly, “Financial capitalism became a market in imaginary assets, made plausible only by the Wall Street equivalent of fake news.” The market’s destructive power is also demonstrated by the prioritisation of shareholders over workers, consumers and communities. Experts say the compulsion to increase share price above all else has hollowed out the mainstream economy.

Economics professor William Lazonick notes that over a decade, Fortune 500 companies spent 86 per cent of their $3.4 trillion profits to buy back shares and give dividends to shareholders, leaving only 14 per cent for reinvestment in the company. Workers are now a cost to be eliminated. Over the past 50 years, the share of wages to GDP fell from 54 to 44 per cent, while corporate profits rose from 4 to 11 per cent. But the algorithm is servant, not master. It fast-tracks its creators’intentions, which are driven by altruism or greed. AI accelerates benefits and inequalities, profits and losses. The legendary GE boss Jack Welch was an ardent advocate of this shareholder capitalism. By 2009, he had changed his mind, calling it “a dumb idea”. By then he had retired with a fortune of $900 million. It was “dumb” because growth slowed. Companies had to buy back stocks to increase share price and create the illusion of growth to conceal the stagnation. Real growth improves people’s lives. So now, fake news in politics complements fake growth in economics. Perhaps, it was farsighted to call this tool artificial intelligence.