A Trump of lies

Why are we still shocked by President Donald Trump, his falsehoods, distortions and exaggerations? Through the ages, in mythology and in history, Gods and men have lied. One of humankind’s oldest tendencies, lying ranges from the harmless, arousing fun and laughter, to the vicious, resulting in grief and death. Literature captures the rainbow spectrum of lies, from dark to light, from hilarity to the terrors of its consequences. An enduring dramatisation is Iago’s cruel lies that draw Shakespeare’s Othello to suicide.

Research typically focuses on the liar—the motivations, the character flaws and the after-effects. But it does not equally analyse the “lied-to” or the victim. There is an almost predatory relationship here, with the liar exploiting the vulnerabilities of the lied-to, not necessarily abusively, but in a psychologically manipulative manner. The liar becomes the “re-affirmer”, telling what the lied-to wants to hear or already suspects. Only if it hits a fertile, receptive mind can the lie strike root and germinate into a monster of belief in the victim’s head. As Othello shows, lies unleash devastating consequences when they awaken the victim’s dormant demons of jealousy. Absolving himself, Iago says of Othello, “I told him what I thought, and told no more/ Than what he found himself was apt and true.” 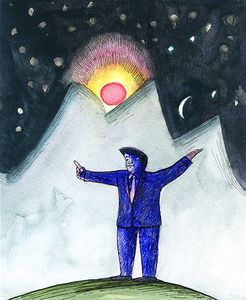 Trump’s lies, perhaps, should be seen in this context. He is talking only to his base, not to CNN, educated Americans or the world. He is not lying, he is telling what his base wants to hear, what they believe to be “apt and true”. Left behind by globalisation, digitalisation and offshoring, alienated and stressed, Trump’s base clings to conspiracy theories to explain the downturn in their lives. They fully endorse Trump’s attacks on the liberal establishment, the intelligentsia, Hollywood, mainstream media and social media giants. In daring to filter his misleading messages to his base, Twitter earned Trump’s blistering wrath.

Rising like the coronavirus death toll, Trump’s falsehoods are nearing 20,000. “There has never been such a serial liar in the Oval Office,” says presidential historian Douglas Brinkley. “Trump lies as a policy.” Trump appals truth-seekers, but every one of his lies cements the bond between him and his base. This explains why despite his follies, Trump’s ratings never dropped below 35 per cent.

Reading between Trump’s lies, his motivation appears to be to win admiration or deny failure. He is not the first or the last to lie for those reasons. “Lying politician” is a 200-year-old British phrase that still survives, though many now see it as a tautology—a repetition in terms. Lies resonate because they arouse emotions. Both literature and history unveil the drama of unpredictable outcomes when emotions run high. “Even the buses lied” is a popular British mantra to describe the Brexiteer’s campaign to leave the European Union. Boris Johnson even faced a lawsuit for his falsehoods that were plastered on London buses. The public knew these claims were false. Yet, not only did Brexiteers win the referendum, Johnson secured a landslide victory in last year’s elections.

Analysts’ explanation is that we have entered the post-truth age. But, could it be that voters are battling a bigger, bitter truth—a rigged system entrenched by a corrupt elite of dishonest politicians, tycoons and journalists that perpetuates disparity and discrimination? The web of inequality, injustice and deceit has spun through the centuries. Lies are the silken threads that weave the gossamer snares of deception and defeat, vanity and victory.