They live in a time warp, in an era of German supremacy, with Heil Hitler salutes and gun-slinging swagger. They print their own driver’s licence, ID and passport. They paint borders around their property to demarcate their sovereign territory titled the “Second German Empire,” the “Free State of Prussia” or the “Principality of Germania”. They bear arms to “carry on the fight” against modern “illegitimate” Germany, still “occupied by the Allied Forces”. They call themselves the Reichsbürger—citizens of “the Reich (the greater German empire)”. The German domestic intelligence agency, BfV, estimates there are 16,500 of them.

Most Germans see the Reichsbürger as a motley bunch of zealots and crackpots. They comprise neo-Nazis, white supremacists, bigots, xenophobes, ultra-religionists, anti-semites and cranky oddballs who swamp local state apparatus with lawsuits or instigate gun battles with police. Mostly hailing from the former East Germany, they are the least integrated into the German economy. A district court judge in the Saxony-Anhalt state described them as “conspiracy theorists” and “malcontents”. Apart from the Reichsbürger, there are another 8,000 right-wing radicals with differing motives and ideologies. The demographic profile of this far-right fringe is similar to President Donald Trump’s base: white, socially-disadvantaged, middle-aged men. 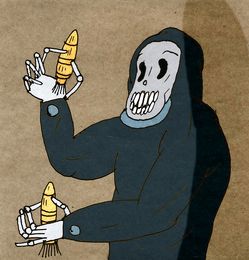 The growing radicalisation of the far-right is alarming. The influx of refugees in 2015 unleashed a torrent of xenophobia. There were several instances of migrant harassment, but Germany was shaken in June when a neo-Nazi murdered Walter Lübcke, a conservative politician who faced death threats from right-wingers for supporting Chancellor Angela Merkel’s liberal refugee policy. The killer has a long history of violent crimes against immigrants.

The involvement of soldiers and policemen in far-right violence is also disturbing. A neo-Nazi terrorist cell was discovered in the military, plotting to assassinate senior government leaders and lay the blame on asylum seekers. A soldier who was arrested had posed as a Syrian refugee and had, in fact, been given asylum. A former soldier and neo-Nazi, Christian Weissgerber, told German broadcaster ARD, “For me the Bundeswehr (military) is so riddled with nationalist-conservative, racist people that it seems a little ridiculous that everyone is suddenly pretending this is something new.” Defence analyst Sebastian Schulte disagreed. “There has always been the issue of far-right people being drawn to the Bundeswehr, that is a problem that needs to be rooted out, no question,” he said. “But I fail to see a systematic, deeply-rooted, anti-democratic, right-wing network within the Bundeswehr.”

Attracted to weapons like moth to flame, far-right radicals find ways to acquire them illegally or legally. In the former Nazi stronghold of Thuringia, the state intelligence agency discovered that neo-Nazis are legally accessing firearms at shooting clubs. The “weaponisation” of right-wing extremists is a dangerous phenomenon on both sides of the Atlantic, as the recent mass shootings in the United States reveal.

Recently in Italy, police raids on far-right groups led to unprecedented seizures, including an air-to-air missile used by the Qatari army, latest machine guns, bayonets, firearms, rocket launchers, ammunition and neo-Nazi propaganda. The arrested include a former candidate of the neo-fascist Forza Nuova party. The arms were smuggled from Austria, Germany and the US. Police suspect the arrested men were involved in arms smuggling. “The far-right in this country traffics weapons of war, and even missiles. It’s an incredible, very serious event,” said Maurizio Martina, former head of the opposition centre-left Democratic Party. Many mainstream European politicians describe gun-toting neo-Nazis as ticking time bombs.