Ahead of assembly polls in Karnataka, BJP focuses on pro-hindutva legislation 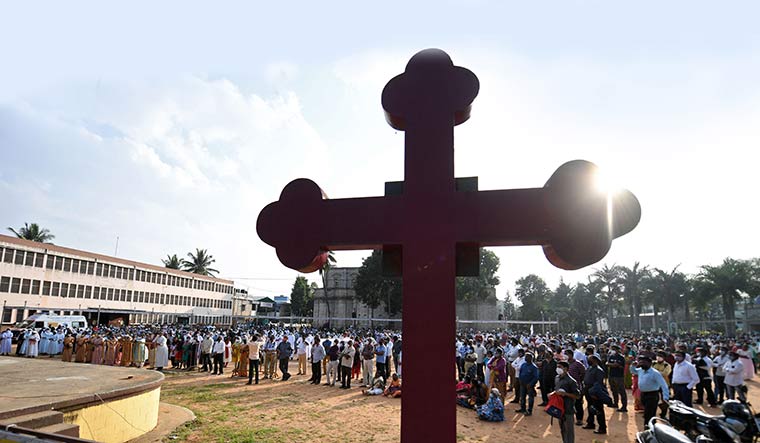 United stand: Members of the Christian community take part in a protest against the anti-conversion bill at St Francis Xavier Catherdal in Bengaluru | Bhanu Prakash Chandra

KARNATAKA BECAME THE ninth state in the country to introduce a bill to make forced conversion a cognisable and non-bailable offence. The “Karnataka Protection of Right to Freedom of Religion Bill, 2021” was passed in the assembly during the recently concluded winter session at Belagavi on December 23. However, the bill needs to be passed in the legislative council. The ruling BJP has decided to table the bill only in the next session as it lacks majority in the 75-member upper house.

The bill tabled by Home Minister Araga Jnanendra was met with stiff opposition from the Congress and the Janata Dal (Secular), while the Christian community has been holding a series of protests demanding its withdrawal. The proposed bill prohibits unlawful conversion by misrepresentation, force, undue influence, coercion, allurement or by any fraudulent means. It bans conversion for marriage, a long pending demand of right-wing activists who allege a spike in the ‘love jihad’ cases. Reconversion into Hinduism has been, however, kept out of its ambit as the BJP contends it is homecoming of Hindus who have converted to a religion of foreign origin.

Leader of opposition Siddaramaiah said the bill was draconian and unconstitutional. He particularly objected to the provision which made conversion by or after marriage unlawful, calling it a violation of the fundamental rights of an individual to choose his or her partner. Law Minister J.C. Madhuswamy said although Article 25 of the Constitution guaranteed freedom of religion, it was subject to public order, morality and health. “In recent years the state has noticed many instances of conversion by fraudulent means and also mass conversions, disturbing public order. At present, there is no legislation to prevent these instances and to punish persons indulging in the act. So the Law Commission of Karnataka, too, recommended a new law,” said Madhuswamy. Chief Minister Basavaraj Bommai, who termed religious conversion a “silent invasion”, said poverty and disabilities were being misused to lure people to change their faith and that a stringent law was needed to curb the practice.

With Karnataka going to polls in less than 16 months, the BJP is focused on pushing legislation that aligns with its pro-Hindu agenda. After passing the contentious law against cow slaughter, which had triggered debate over food choices of people, it has now pushed through the bill to “tackle” unlawful conversion.

Peter Machado, archbishop of Bangalore and president of the All Karnataka United Christian Forum for Human Rights, said the Christian community was opposed to the bill as it would embolden Hindu fringe elements to attack missionaries and target pastors and nuns. “The first anti-conversion law was passed in Odisha in 1967. Attacks on Christians began from the 1970s, culminating in the Kandhamal genocide. The law gave a justification for the attacks on Christians,” he said.

Machado said there was no need for a new law as there were sufficient laws and court directives to monitor any aberration from existing laws. Siddaramaiah said, “In the new bill, the burden of proof to show that there was no illegal or forced conversion or a forced conversion through marriage lies on the person who carries out the conversion, or helps such a conversion. This contradicts the Indian Evidence Act.” State Congress president D.K. Shivakumar said the bill was the BJP’s ploy to disturb peace. “The Mughals, the British and the Portuguese ruled India but the population of Christians has not increased. The children of BJP leaders are studying in Christian educational institutions. I, too, studied in a Christian school. But no one preached Christianity to me or tried to convert me. If Christian institutions provide free medical treatment can you call it allurement? The bill is a blot on the state.” 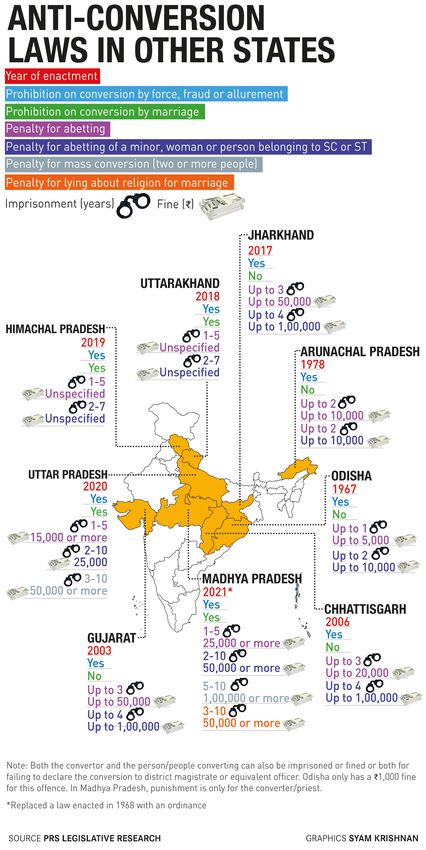 While many BJP-ruled states like Uttar Pradesh and Gujarat have enacted laws to curb forced conversion, penal provisions in the Karnataka bill are more stringent. Any forced conversion of a person belonging to general category will attract a jail term of three to five years with a penalty of 025,000. However, the law prescribes severe punishment of imprisonment from three to 10 years and a penalty of Rs 50,000 for those who convert minors, women or people belonging to Scheduled Castes and Scheduled Tribes. ‘Mass conversion’, defined as conversion of two or more people, will attract a prison term of three to 10 years and a fine of 01 lakh. Under the provisions of the bill, people belonging to Scheduled Castes will lose their reservation benefits after conversion.

Siddaramaiah questioned the wisdom behind prescribing more stringent punishment for converting people belonging to Scheduled Castes and Scheduled Tribes. “As Dr Ambedkar said, all are equal before the law and should get equal protection of law,” he said. “Why this discrimination?”

Bommai shot back saying the BJP was aware of ground realities. “Does Siddaramaiah have a problem if vulnerable groups get additional protection under the law? We are aware that these groups lag behind in education. They are ignorant and naive and some people are exploiting their helplessness.”

The district magistrate has to conduct a police inquiry to find out the real purpose of conversion. A declaration would be put up on the notice board to check whether there are any objections. If there are objections, the district magistrate can order an inquiry through the revenue or social welfare department to check “genuine intention, purpose and cause” of the proposed conversion.

Anil Thomas, state general secretary of the BJP Minority Morcha, said the Census did not give the real picture as converted Christians, especially those who belonged to Hindu castes and communities, refuse to give up their caste identities to continue to avail of reservation benefits. “You can find bishop Venkatesh Nayak, prophet Narayan Gowda and self-proclaimed bishops across the state. Officially, the state has only about 11.5 lakh Christians. But Christian religious leaders from prominent denominations like the Roman Catholics, Syrian Christians, Pentecostals, Methodists and Baptists each claim to have numbers not less than 10 lakh.”

Thomas said a caste census ordered by the Siddaramaiah government in 2016 had listed 40 Christian denominations, which included those converted from different Hindu castes. “The contention that conversions are happening because of caste hierarchy and discrimination in the Hindu society is not true. The caste survey shows it is not just ‘untouchables’, but also people belonging to other Hindu castes who have converted,” he said. BJP MLA Arvind Bellad, who represents the Hubli-Dharwad constituency, said discrimination was prevalent not just among Hindus and that several groups in Christianity and Islam practised untouchability.

During the debate on the bill in the assembly, Siddaramaiah said, quoting Ambedkar, that to liberate dalits from slavery, conversion was necessary. Speaker Vishweshwar Hegde Kageri responded to Siddaramaiah’s argument by pointing out that Ambedkar was opposed to converting into a “foreign religion”. “Ambedkar refused to embrace either Islam or Christianity saying that accepting a foreign religion would not be merely a religious conversion (mataantara) but alienation from the nation (rashtraantara). The greatness of Ambedkar was that he worked for 20 years to fight the evils in the Hindu society before embracing Buddhism, a religion which originated in India,” said Kageri.

Dalit leader and Kollegal legislator N. Mahesh who joined the BJP after he was expelled from the BSP said that in Ambedkar’s view, Buddhism was 100 per cent Indian. “Babasaheb said he was going back to his original religion. He had cautioned dalits that converting to Islam or Christianity would denationalise the depressed classes,” said Mahesh.

As BJP prepares to get the bill passed in the legislative council, it needs the support of the newly-elected independent MLC Lakhan Jarkiholi, younger brother of party MLAs Ramesh and Balachandra Jarkiholi. The BJP’s strength in the 75-member house will go up from 32 to 37 on January 5, when 25 members would retire and new members would take oath. However, it will still be one short of a simple majority. It hopes to get the anti-conversion bill passed at the earliest by winning over Lakhan.