BJP plots to have its own government in Puducherry 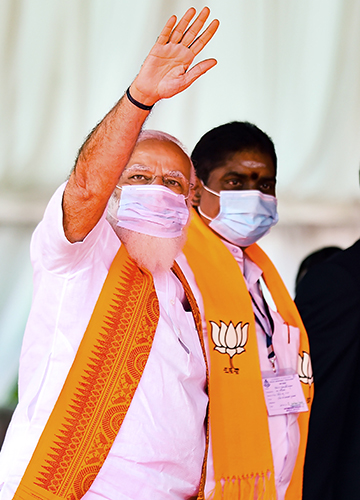 Who will blink first?: Prime Minister Narendra Modi flew down to launch the BJP’s campaign | PTI

AFTER THE COLLAPSE of the V. Narayanasamy-led Congress government in Puducherry on February 22, the BJP has stepped up its political campaign in the Union territory. Prime Minister Narendra Modi and Union Home Minister Amit Shah flew down to Puducherry in quick succession to launch the BJP’s election campaign. Both leaders unleashed a scathing attack on Narayanasamy and the fallen Congress government. The BJP has been eyeing Puducherry as a stepping stone to the Tamil heartland.

“The BJP wants to capture power through backdoor. This will definitely not happen,” Narayanasamy told THE WEEK. But the BJP believes that it has a chance, especially because of its control over the levers of power in Delhi and the strain on the Congress-DMK alliance. Despite initial hiccups, it has sealed its alliance with the All India N.R. Congress (AINRC) led by former chief minister N. Rangasamy. According to the deal which was finalised on March 9, the AINRC has been allotted 16 seats, the BJP has got nine and the AIADMK five.

The BJP-AINRC seat sharing arrangement was finalised after five rounds of talks between Rangasamy and the BJP’s Puducherry in-charge Nirmal Kumar Surana. But the AINRC is upset that the BJP has not yet accepted Rangasamy as the chief minister candidate of the alliance. “Why should we go with the BJP? We want Rangasamy to be our chief minister candidate. But the BJP has not said that openly,” said Ravikumar Kandasamy, an AINRC member who was part of a group protesting against the BJP outside Rangasamy’s residence. Rangasamy, however, said he was confident of victory. “All differences have been sorted out. We will form the government,” he told THE WEEK.

The Congress and the DMK, too, had been trying to woo Rangasamy. Even a day before the BJP-AINRC deal was finalised, Puducherry Congress chief A.V. Subramanian said his party would not hesitate to align with Rangasamy to keep the BJP out. A.M.H. Nazeem, Karaikal district secretary of the DMK, released a video inviting Rangasamy to lead the anti-BJP front.

Rangasamy is seen as a simple person with an emotional connect with the people. He earned much sympathy when he was forced to launch the AINRC after the Congress high command chose Narayanasamy over him. He has been reluctant to go with the BJP this time, especially after the debacle he faced in 2019, when the AINRC-BJP alliance lost bypolls in two assembly seats and also the sole Lok Sabha seat in Puducherry. “He did not want to go with the BJP. But he had no other option as the Congress-DMK alliance still has chances to come back to power,” said a source close to Rangasamy. Despite its alliance with the AINRC, the BJP is plotting to have its own government and chief minister. One of the potential candidates is former Congress leader A. Namassivayam, who defected to the BJP in January, despite being the second-in-command in the Narayanasamy cabinet. Half a dozen more Congress leaders followed him. “Narayanasamy failed to keep his promises. The Congress did not work for the people. This is the reason why their MLAs joined our party,” said BJP leader V. Saminathan. He is confident that the BJP will form its own government despite Rangasamy’s insistence on the top post. “Everything has been sorted out. You wait and see,” he said.

The BJP will, however, find it difficult to implement its plan. For instance, it may not be easy for Namassivayam to retain his Villianur constituency, which has a considerable Muslim population. He has now been shifted to Mannadipattu, considered to be a safe seat. Being the son-in-law of Rangasamy’s brother, he is also likely to face pressure from his family to scale down his ambition. Moreover, most of the MLAs who defected to the BJP are no longer so popular in their constituencies, and the BJP itself has no mass base in Puducherry.

The BJP had explored the possibility of prolonging president’s rule in the Union territory under Dr Tamilisai Soundararajan, the new lieutenant governor. But the plan was abandoned after Narayanasamy played the victim card on the day of the trust vote and exposed the BJP’s strategy. Subsequently, just before the elections were announced, the Centre appointed retired IAS officer C. Chandramouli and A.P. Maheshwari, who retired on February 28 as director general of the Central Reserve Police Force (CRPF), as advisers to the new lieutenant governor, indicating that Soundararajan will have an extended tenure. The lieutenant governor is travelling extensively across Puducherry, trying to build a rapport with the people.

Although elections in Puducherry are on April 6, the real political game will begin on May 2, when the results are declared. The endgame will depend on the number of seats won by the main alliances.