BJP has reposed its faith in strong ground-level leaders 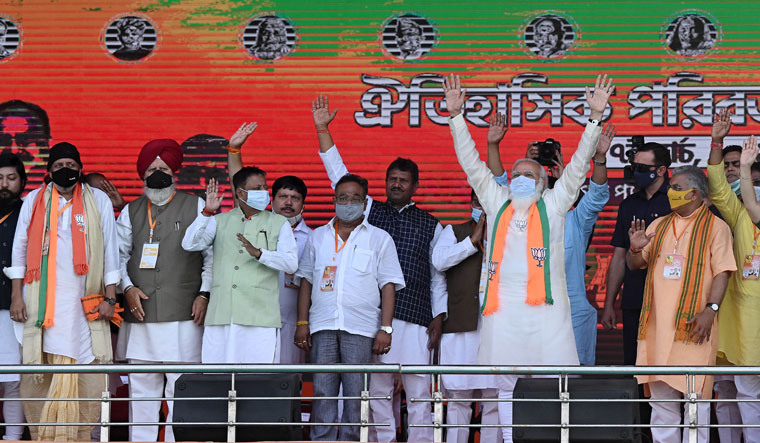 Prime Minister Narendra Modi’s rally at Kolkata’s Brigade Parade Ground came at what could be a turning point in the political history of West Bengal. The March 7 rally saw more than five lakh in attendance, and signalled that the party had outpaced the left and the Congress in the state to potentially set up a straight fight with Mamata Banerjee’s Trinamool Congress. That someone as popular as actor Mithun Chakraborty joined the BJP earlier in the day would only help the party dispel the notion that it is an outsiders’ party. “There is an attempt to show this as a fight between the prime minister and the chief minister,” said CPI(M) central committee member Sujan Chakraborty. “It is a ploy by both sides to polarise voters on the basis of religion.”

The list of candidates for the state elections points to this. While the BJP has no minority candidate for the first two phases, the leftists have allied with the Indian Secular Front of Muslim cleric Abbas Siddiqui.

The state Congress has been more cautious. It is not happy with the ISF’s inclusion in the alliance and has refused to give it seats in Muslim-dominated Malda and Murshidabad. After the left’s intervention, though, the Congress reluctantly agreed to leave the ISF seven seats. This, despite Congress president Sonia Gandhi having greenlighted the alliance.

“Elections will come and go, but we must understand that Bengal is not Kerala,” Congress Rajya Sabha member Pradip Bhattacharya told THE WEEK. “West Bengal is a sensitive state that was peaceful after independence as our previous chief ministers rejected both Muslim and Hindu radicals. Unfortunately, we are seeing both happening today. The Congress will never be part of such a game.” The left, meanwhile, has given the ISF 30 seats from its kitty.

The ruling Trinamool, seemingly worried at the developing political situation, has dropped 51 of its sitting MLAs. Banerjee even dropped former deputy speaker Sonali Guha, who has held the Satgachhia seat since left stalwart Jyoti Basu retired in 2000. Clearly miffed, Guha, who was quite close to Banerjee, joined the BJP.

In a situation where no seat seems safe, Banerjee herself will take on her former confidant Suvendu Adhikari in Nandigram. He was at the forefront of the Nandigram movement, which had helped the Trinamool unseat the left government in 2011.

Notably, she has dropped the man who headed the Singur movement, MLA Rabindranath Bhattacharya. “The golden days of the Trinamool are over,” said Bhattacharya, who recently jumped ship to the BJP. “It is no longer the party it used to be.” Banerjee has also removed Bhangar MLA Arabul Islam, whose alleged highhandedness had created a “liberated zone” there in 2018. The villagers, backed by the CPI(Marxist-Leninist) Red Star, had protested a power project in their area and had kept the government out. Bhangar is one of the seats the ISF is eyeing.

Banerjee has kept out leaders above 80 citing Covid-19, but many in her party have not bought the argument. Jatu Lahiri, the 84-year-old Shibpur MLA, joined the BJP a day after the candidates were announced. He has not demanded a ticket, though. “I would work as a political man till my last day,” he said. “I would like to die holding my head high, which the TMC did not allow me to do.”

Former Marxist heavyweight Abdur Razzak Molla, who had been in the assembly for nearly five decades, has also been denied a ticket. He could not be reached for comment.

In Kolkata, however, Banerjee had not experimented much. Perhaps because she thinks that the BJP is a threat in only Bhabanipur and Jorasanko. Both constituencies have a large number of Marwaris and Gujaratis.

There, she has fielded veterans—Sobhandeb Chattopadhyay from Banerjee’s Bhabanipur seat, and her mentor Subrata Mukherjee from Ballygunge. The fear of defeat in Nandigram was also apparent when she said, “I might stand from Tollyganj also.”

She has fielded ten non-political personalities and removed 50 candidates from seats where an internal study showed that the BJP would win. That includes the districts of North 24 Parganas, Hooghly, Bankura, Midnapore and Purulia.

Banerjee also said that she would bring back the state legislative council—which was scrapped in the 1960s—to accommodate senior leaders like Finance Minister Amit Mitra and Purnendu Bose. 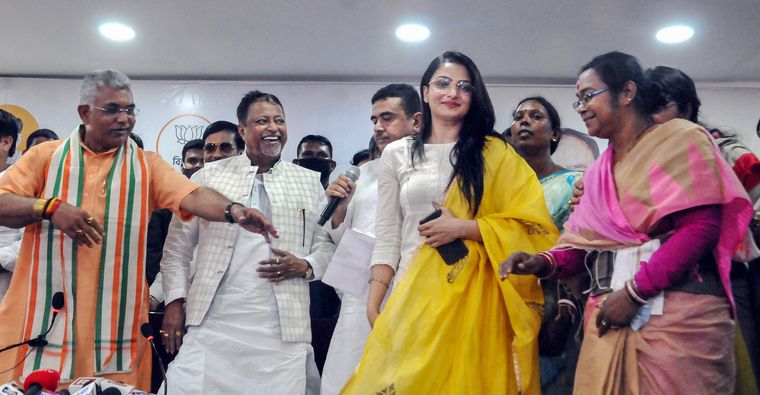 Trinamool sources said that Banerjee’s nephew Abhishek and strategist Prashant Kishor had a bigger say in the selection of candidates this time. “Didi would not have denied tickets to ground-level leaders,” said a party leader who was snubbed. “Because of such a change, disgruntlement would rise in the party and, in fact, it has started.”

Interestingly, party leader Sarala Murmu, who got a ticket, quit to join the BJP along with 22 zilla parishad members on March 8. Apparently, she wanted to contest from Malda, and not Habibpur. The Trinamool later said that she was being replaced because of health reasons. The same day, Sankrail MLA Sital Sardar, and footballer and MLA Dipendu Biswas also joined the BJP.

Many of those who left said they did not expect tickets, but just wanted to punish the Trinamool.

The BJP, on the other hand, has focused on grassroots level leaders in its list. The party has only announced the candidate list for the first two of the eight phases, and a lot of thinking has gone into the selection. Apparently, on the list of probable candidates, the BJP has more than one in each seat, thanks to the inflow of defectors from other parties.

Union Home Minister Amit Shah and BJP’s central election committee head Bhupender Yadav have done their homework. Each name the party gives is put through tough scrutiny, down to the local level.

The leaders who have built the party from scratch have been rewarded. For instance, Rashtriya Swayamsevak Sangh worker Bikash Kamila, who has built up the party on Sagar Island in the Sunderbans, where the Trinamool is quite strong, has been given a chance. In East Midnapore, the only Trinamool defector to be given a ticket is Adhikari; the others have been told to wait. Leaders strong on the ground have been preferred. For example, Samit Das, who has played a key role in building up the party in Midnapore, has been fielded there.

“If you see all the parties, the BJP’s candidates are more powerful,” said a BJP national secretary. “They are people from the ground. They are loved by the local people.”

As for the left-Congress-ISF alliance, the left front has announced the names of its 37 candidates for the first two phases. The Congress will contest in 11; the ISF, five. Sources said the left front would field Students’ Federation of India national joint secretary Dipsita Dhar, and Jawaharlal Nehru University leader Aishe Ghosh from Durgapur. CPI(M) state secretary Surjya Kanta Mishra will be sitting it out for the first time in three decades. Sources said that the CPI(M) would field Mohammed Salim; from Siliguri, MLA Ashok Bhattacharya would contest, and in Jadavpur the party will re-nominate popular leader Sujan Chakraborty. The left parties, said sources, would field a lot of young leaders to mark a fresh start in the state.

Overall, Bengal is seeing the emergence of a new generation of leaders. While in the Trinamool, it may be the beginning of the Abhishek era, the left is banking on youth leaders who might not win this time, but could do so in a few years.

Strength: Grassroots-level candidates can bring in votes themselves

Weakness: Lack of organisation in places like South 24 Parganas, Kolkata and Birbhum

Opportunity: Massive anti-incumbency against the Trinamool

Threat: Not much Muslim support; may draw a blank in Murshidabad and some parts of South 24 Parganas

Left front (with Congress and ISF)

Strength: Revival thanks to Mamata’s attention being elsewhere (BJP) Weakness: People still tired from the three-decade rule. Congress is strong only in Murshidabad. Left only strong in eight to 10 seats

Opportunity: Young faces have been deployed. Party thinking of the future

Threat: Alliance with ISF. More Hindus might flock to the BJP