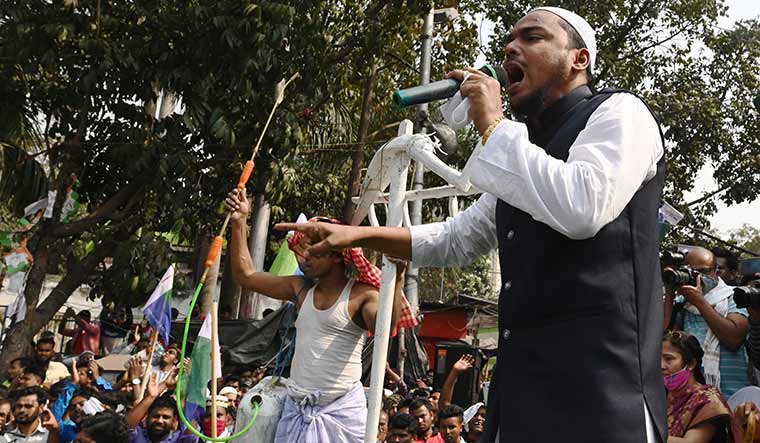 Ally dallying: Siddiqui at a rally in Kolkata on February 23 | Salil Bera

IT IS ELECTION season in West Bengal and bloodshed was forecast. But even the state’s most cynical observers would not have expected bombs being hurled at a minister, that too at a heavily guarded railway station. Jakir Hossain, the minister of state for labour, was going to Kolkata from the Nimtita railway station in Murshidabad, on February 17, when the crude bombs exploded. Twelve of his associates were also injured; they are all at the SSKM hospital in Kolkata.

Hossain is now stable. The state polity is not. Said Abu Taher, the Trinamool Congress district president in Murshidabad, where the incident took place: “If they want this to be the model of the election, let it be. We are ready.”

Mohammed Asif Khan, a trader in Domkal, Murshidabad, said, “I fail to understand why they (the Trinamool and the Congress) fight each other. Ultimately, the BJP would gain the most. I would not be shocked if it wins at least six seats (of 22) in Muslim-dominated Murshidabad.”

If violence begets violence, the common Bengali has the most to worry about. If a minister is not spared, how can a commoner sleep in peace?

Governor Jagdeep Dhankhar has submitted a detailed report to the Union home ministry regarding three recent incidents. “[It is a] worrisome law and order situation,” he said. “It needs to be addressed urgently.” 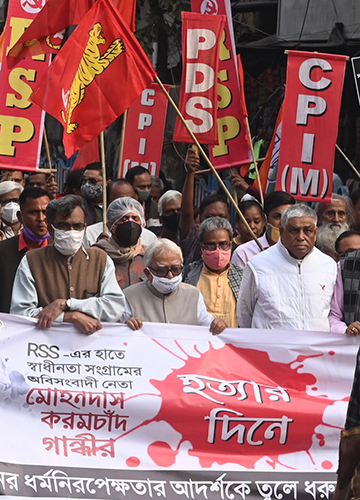 On the ground: (From left) left leaders Surjya Kanta Mishra and Biman Bose with Congress leader Abdul Mannan at a joint rally in January | Salil Bera

A few days before the attack, Firoz Kamal Gazi, a BJP leader from North 24 Parganas, was returning from a public meeting in Basirhat when some goons fired at his car and threw bombs. He was hospitalised with shrapnel injuries.

The following day, on February 16, Moidul Islam Midya, a Communist Party of India (Marxist) worker, died in a private hospital in Kolkata after fighting for his life for five days. The youth activist from Bankura had participated in a Congress-left protest rally in Kolkata, where he was allegedly injured in police action.

CPI(M) central committee member Sujan Chakraborty called it a murder in broad daylight. “They showed no mercy and never tried to disperse the mob,” he said. “The police selected boys and girls of our parties one by one and hit them intentionally.”

Seeing an opportunity, the state BJP wrote to Amit Shah and the Chief Election Commissioner Sunil Arora, demanding restoration of rule of law in Bengal. By February 25, 125 companies of the Central Armed Police Forces will be deployed across the state. This is even before the elections dates have been declared and the model code of conduct is in force.

“They will be deployed in key positions to see that political activities of all contenders are done peacefully and in accordance with law,” said a senior CAPF officer in Kolkata.

The violence has led to another talking point in state politics, with the Furfura Sharif and the All India Majlis-e-Ittehadul Muslimeen saying that Muslims were merely objects of violence. They have accused the Trinamool of resorting to “mindless violence” against the minority community workers in Bengal, irrespective of political party. “The most unfortunate thing is that Muslims are being used against Muslims,” said Syed Zameerul Hasan, state AIMIM in-charge. “While most leaders being attacked are from our community, the offenders are also our brothers. The Trinamool is using some Muslim youth to attack their Muslim opponents.”

He claimed that there was speculation that Hossain was going to leave the Trinamool for the Congress. “And he was attacked as a result of that,” said Hasan. “It was a high intensity bomb that targeted him. He had a close shave.”

Hasan had sent a report to his party president Asaduddin Owaisi, seeking his permission to retaliate and ensure the safety of his workers.

“Owaisi saab asked us to show restraint,” he said. “He said [if we were] to fight, more and more Muslims would lose their lives. So, we have decided to adopt a different strategy, which we are not going to reveal.”

The AIMIM and Abbas Siddiqui’s Indian Secular Front are reaching out to Muslims across the state, asking them to not hit a fellow Muslim even if he was from the BJP.

That the Muslim vote in the state is being polarised along communal lines was evident when leader of the opposition Abdul Mannan wrote to his party president Sonia Gandhi. “He (Siddiqui) is not only popular for his oratory skill among Muslims, but also among dalits and tribals,” wrote Mannan. “So, the addition of the ISF in the left-Congress alliance may be a game changer.”

The talks are yet to reach a conclusion. While Siddiqui is sticking to his position of contesting in 45 to 70 seats, the Congress wants to fight in more than 100 seats. That leaves the left with fewer than 140 seats; it wants at least 160.

“There can be some adjustments and we may settle for fewer seats, but that should not be fewer than 45,” Siddiqui told THE WEEK.

He said that he had told the left-Congress alliance that, without his ISF, their chances of winning would be thin. “Votes have been polarised in Bengal,” said Siddiqui. “And I have told them that they may contest all the seats together, but they cannot make any mark without Muslim votes in large numbers.”

But would the ISF not need the left-Congress team to have a chance at victory? “Of course,” he said. “If without them I was getting 20 seats, with their help it would be double. But they should trust me once they have decided to go for the alliance. My win would be theirs, too.”

Though Sonia had assented to the coalition, not everyone in the Congress is on board. Mannan and state Congress president Adhir Ranjan Chowdhury have visited the Furfura Sharif in Hooghly and have told Siddiqui that the Congress could go with the ISF provided Owaisi was kept out.

“But I said that that is just not possible,” said Siddiqui. “Owaisi is stronger than any opposition leader in resisting the Modi government in Parliament.”

CPI(M) state secretary Surjya Kanta Mishra said that his party had carefully listened to Siddiqui. “I have never found his utterances communal,” he said. “In fact, he would like to take along all the backward people.”

Senior Congress leader and Rajya Sabha member Pradip Bhattacharya did not agree. “We are extremely cautious,” he told THE WEEK. “Though such an idea of an alliance with religious groups has worked in Kerala, Bengal has a different history. We should not forget what happened in the name of the Muslim League before partition. Such politics should never be played in a state like Bengal, where the situation is vulnerable.”

He said that the Congress would never accept the AIMIM as an ally. Moreover, even if there was a seat adjustment, he said, there could be no common platform or a common minimum programme with the ISF. “They would have to accept the Congress-left manifesto. To defeat the TMC and the BJP, we might agree on seat-sharing. But only that.”

Many of the Muslims in Bengal have supported the Trinamool in recent elections. Now, if the Muslim vote gets further divided with the entry of the ISF and the AIMIM, the BJP would stand to gain.

The Congress and the left would hold their first joint rally at the Brigade Parade Ground in Kolkata on February 28. The catch is whether or not to invite Siddiqui. A majority in the Congress has objected, saying the party would lose its commitment in other states, where it is opposing the AIMIM. The leftists, however, are leaning towards the ISF.

Notably, the left has ceded the Nandigram seat, where Banerjee will contest, to the ISF. The constituency has around 40 per cent Muslim votes.

The ISF would not mind not being invited. Siddiqui and Owaisi have their own plans. Owaisi will land in Kolkata on February 25 and hold a rally in the Muslim-dominated Metiabruz. He would also hold rallies in Howrah, Murshidabad and Uttar Dinajpur, which together make up 49 seats.

Siddiqui’s targets are the two 24 Parganas (64 seats), Hooghly (18), and a few seats in Nadia and Birbhum. He can hurt the Trinamool or the Congress-left alliance, or both, in 70 of these seats. So, together, Owaisi and Siddiqui would be influential in around 110 seats. And, if they win, the biggest beneficiary would be the BJP.