Despite the AIMIM having no shot at ruling Hyderabad, BJP has made it its prime rival 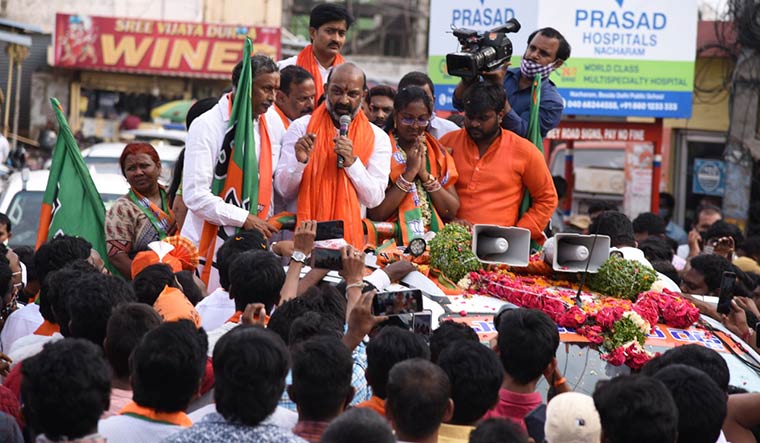 UNION INFORMATION and Broadcasting Minister Prakash Javadekar recently took part in the BJP’s high-octane campaign ahead of the Hyderabad civic polls. The Union minister campaigning in a municipal election raised a few eyebrows, but his speech revealed the BJP’s game plan. “Do you want a BJP mayor or an MIM mayor?” he asked. He went on to unveil a “charge-sheet”, a booklet outlining the alleged failures of the ruling Telangana Rashtra Samithi government. Occupying significant space on the front page alongside TRS leaders was the image of Asaduddin Owaisi, Hyderabad MP and president of the All India Majlis-e-Ittehadul Muslimeen (AIMIM), also referred to as MIM.

Later, BJP state president Bandi Sanjay Kumar participated in a meeting attended by non-Telugu speakers and migrants. “How did the MIM win five seats in Bihar?” he asked. “The Muslims voted for that party. Same way, it is a good opportunity for the Hindus to consolidate and vote for the BJP. We cannot let the MIM take control of the nation.” Sanjay, who has been leading the BJP campaign to rename Hyderabad as Bhagyanagar, courted controversy on November 24 when he said that if the BJP gets the mayor’s post it would conduct a “surgical strike on the old city and throw out Rohingyas and Pakistanis”.

The BJP’s strategy for the civic polls, scheduled for December 1, became even clearer when Bengaluru South MP and the party’s youth wing president Tejasvi Surya landed in the city. “We will not let Islamisation happen,” he said. “A vote for Owaisi is a vote against India.” He continued, now emotionally: “Asaduddin Owaisi and Akbaruddin Owaisi, listen to me. This is not Nizam’s rule but that of Narendra Modi.”

The BJP, which is riding high on the success of its recent bypoll win in Dubbaka, had started positioning itself as the primary challenger to the TRS. After the schedule for the civic polls was released, it initially targeted the TRS and occasionally took potshots at the AIMIM. But, now there is a marked shift in the party’s approach—it seems to have elevated AIMIM to the status of its principal foe.

But, the TRS is definitely not forgotten. The current messaging, delivered with a heavy dose of hindutva, is that a vote for the TRS will ultimately be a vote for the AIMIM. Though the two parties never had an alliance openly they are known to be on friendly terms.

The BJP targeting AIMIM is interesting because Owaisi’s party has no chance of holding the mayor’s office. Polls are being held for 150 wards in the Greater Hyderabad Municipal Corporation (GHMC). In the 2016 elections, the TRS won 99, the AIMIM 44 and the BJP four. The GHMC, spread over 24 assembly constituencies and five Parliament segments, has around 75 lakh voters. With an additional 49 co-opted members who are MLAs and MPs, the total strength of the GHMC council is 199. Any party which needs to stake claim to the mayor’s post should have 100 members, and the AIMIM is only contesting in around 50 wards.

Reacting to the BJP campaign, an AIMIM leader who requested anonymity, said: “This is a first-of-its-kind provocative campaign by the BJP. Their leaders are asking people to choose between salaam and namaste. They cannot introduce communal elements into everything. These statements will put even the older generation of BJP leaders to shame.”

Owaisi said: “If you wake up BJP leaders, they will say Owaisi. This is the first Baldia (GHMC) elections which are not being fought on local issues. The BJP is talking about Rohingya refugees and terrorism. Focus is on Hindu-Muslim division.” The BJP has devoted a significant share of its time and energy on the Owaisi brothers. But, will it pay dividends?

“The BJP is over-projecting the AIMIM and itself,” said Telkapalli Ravi, a senior political analyst based in Hyderabad. “It is artificially motivated as an AIMIM member cannot be a mayor,” he said. “The campaign is positioned (to create) communal polarisation. The BJP is trying to create hype, but voters are more bothered about civic issues and what the BJP government at the Centre did for them. The mental makeup of Hyderabad is different as it has diverse communities and the hindutva card will not work here.” However, Ravi points out that even if the BJP betters its own performance in 2016, it will be “hyped up” as a success.

Stung by the BJP campaign, the MIM and TRS leaders have openly declared that they are not on the same side and are fighting against each other. Side-lined, the Congress and the Telugu Desam Party are fighting for visibility.

But, despite the BJP’s dominance in the mainstream media, it has its own headaches. In the recent past, a number of mid-level and senior opposition leaders—including a former parliamentarian, legislator and Hyderabad mayor—had joined the BJP. This has led to the number of ticket aspirants shooting up, leading to clashes led by dejected candidates and their followers. In some wards, the number of rebel candidates from the BJP has outnumbered candidates from all other parties together.

However, the morale continues to be high among the BJP’s candidates and cadre. Mirza Akhil Afandi is the only Muslim candidate. He is contesting from Dabeerpura, in old Hyderabad. “I am planning to apply for a gun as I keep receiving death threats,” he said. “I have been associated with the party for 13 years and I am committed to its ideology. I was second in the last election, but this time I am confident of winning and my party looks very strong.”

The old city is the AIMIM’s stronghold, but the BJP has boldly tried to make inroads into it. Its spokesperson Rakesh Reddy had said that the saffron party would go to areas where it did not go last time and motivate its members to fight the “atrocities of the MIM”. He was confident that there would be “consolidation of votes there”.

The open political war between the BJP and the MIM may lead to gains for both parties. And this could hit the TRS, possibly making it difficult for it to improve or match its 2016 tally.