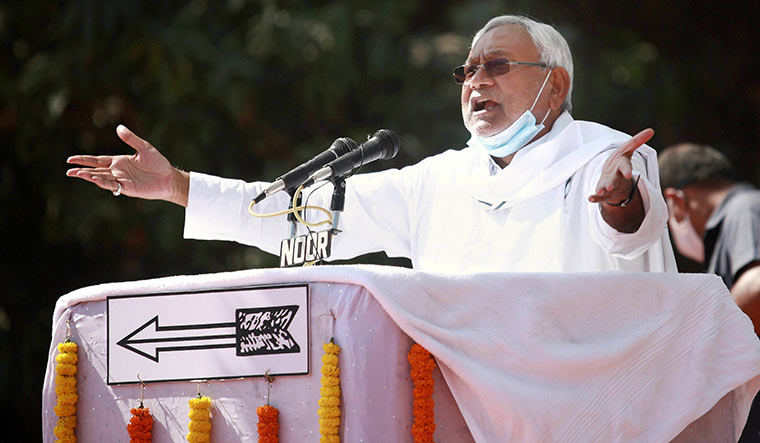 No chief minister in the Hindi heartland has had four consecutive terms in office. Madhya Pradesh Chief Minister Shivraj Singh Chouhan had to resign in 2018, after his third term, though he returned to power in 2020. Former Chhattisgarh chief minister Raman Singh, too, was ousted after three terms, as was Sheila Dikshit in Delhi. States like Uttar Pradesh, Uttarakhand, Himachal Pradesh, Haryana and Rajasthan have mostly voted against incumbent governments.

Nitish Kumar is already Bihar’s longest serving chief minister. But the 69-year-old’s appeal seems to be diminishing. Can he become the first chief minister in the Hindi heartland to win a fourth consecutive term? “These are plebiscitary elections for Nitish Kumar,” said Saibal Gupta, veteran political analyst and founder-secretary of Asian Development Research Institute (ADRI), Patna. “These elections are witnessing a new trend—the entry of young players.”

Kumar had been in a sulk after the Lok Janshakti Party chief Chirag Paswan separated from the National Democratic Alliance to launch a scathing attack on him. It was only after the first phase of the elections on October 28 that Kumar started giving interviews, at the insistence of members of his party, the Janata Dal (United), and BJP leaders. The NDA leaders, too, stepped up their attack on the opposition grand alliance. Prime Minister Narendra Modi’s jibes like “yuvraj of jungle raj”, “double yuvraj” at Rashtriya Janata Dal’s Tejashwi Yadav sharpened the BJP’s messaging against the grand alliance, at a time when Tejashwi was attracting crowds.

“As the first phase polling showed, we are winning,” said JD(U) spokesperson Rajiv Ranjan. “Tejashwi Yadav is bringing crowds to his rallies, but that is not translating to votes.” But, more than what was seen during these elections, it is what was missing that could portent a change in the state’s polity. During the 2015 elections, Modi carpet-bombed the state with 40 rallies; this time, there were only 12. And, the BJP’s campaign was helmed by Amit Shah’s successor, J.P. Nadda. For the RJD, too, there was a major change—its founder Lalu Prasad was missing from the campaigns. He was even missing from the publicity material and Tejashwi rarely mentioned his father.

Lalu’s absence was not an accident. It had a clear motive of distancing the campaign from the convicted leader’s image among non-Yadav voters, particularly the upper castes and the backward castes. Tejashwi tried to make up for Lalu’s absence by addressing over a dozen rallies a day, criss-crossing the state in a helicopter. He also broke Lalu’s 2015 record of 17 rallies in a day by addressing 19. The RJD was successful in ensuring that the debate revolved around development issues and not Lalu’s conviction. It was Kumar’s promise of bijli-paani-sadak (electricity-water-roads) versus the 10 lakh jobs promised by Tejashwi.

Another missing element was overt nods to castes. This is a break from the state’s political dynamics of the last 40 years. Bihar has been different from other Hindi heartland states in that coalition politics has been part of the state polity because caste allegiance plays a bigger part in deciding the voting pattern. During the 2019 Lok Sabha elections, and the 2015 assembly polls, Modi had referred to Hindu deity Krishna’s Yaduvanshi origins to woo the Yadav voters. The Congress, which is trying to find its feet in the state, could be an unintended beneficiary of the non-caste focus this time. “Wherever the politics of caste and religion became prominent, the Congress lost space,” said Randeep Surjewala, chief of the Congress’s election management panel. “People are now tired of the same old story.” He added that the Congress projected aspiration, “a story that cuts across religions, caste, regions and individuals”. Our focus was aspirational Bihar and developing Bihar, he said.

The aspirational Bihar sentiment was high in the state. Millennial voters are moved by dreams of jobs and better material comforts. This found expression in the campaigns of Tejashwi and the array of the BJP’s young candidates like Luv Sinha, Shreyasi Singh and Pushpam Priya Choudhary.

The RJD-led alliance had strategically focused on local issues and on attacking Kumar, rather than raise national issues like China and the lockdown. The party strategists knew that raising national issues would mean the BJP would respond by playing the ultra-nationalism card and that this could only benefit the saffron party. “Nitish Kumar is tired now,” was Tejashwi’s oft repeated line. And while Paswan singled out the chief minister for criticism, he professed loyalty to Modi and the BJP and is hopeful that he will be the king maker when the results are announced on November 10.

On the face of it, the BJP stood firmly behind Kumar as its Central leaders cited his name along with Modi’s. But, it is believed that it may have tacitly supported the LJP. “The LJP is promoted by the BJP,” said Gupta of ADRI. “The BJP hopes to gain more seats. It is testing the waters. It would like Kumar to react.” Paswan, meanwhile, has said that he is ready for the consequences of his “bold actions”.

The apparent diminishing stature of Kumar is helping new leaders to emerge. But, the chief minister has his own following, which is perhaps not as vocal as that of the BJP or RJD. “Nitish Kumar has political honesty, transparency and foresight,” said Ashok Choudhary, Bihar’s minister of building construction and JD(U) working president. “He always conducts himself with decency and tries to help even his biggest critic or opponent. He has had a long public life and there has never been an allegation of corruption against him.” Choudhary added that Kumar addressed the issues of backward populations and women through policies and empowered panchayati raj.

The theme of humiliation is driving passions among Kumar’s political allies and opponents alike. BJP leaders, especially Modi, suffered humiliation when Kumar walked out of the NDA and opposed Modi’s candidature. Paswan has accused Kumar of humiliating his father, Ram Vilas Paswan, as he kept the latter waiting before assuring him of support to get elected to the Rajya Sabha. Tejashwi, too, has a grievance; Nitish left the grand alliance in 2017 even though Lalu made him the chief minister.

Kumar certainly seems to be on a sticky wicket. He is also on the cusp of history—breaking the jinx on the third consecutive chief ministerial term in the Hindi heartland. It remains to be seen whether his development agenda of the last 15 years and his loyal supporters can give him enough seats to remain in the chief minister’s office for a fourth consecutive term.