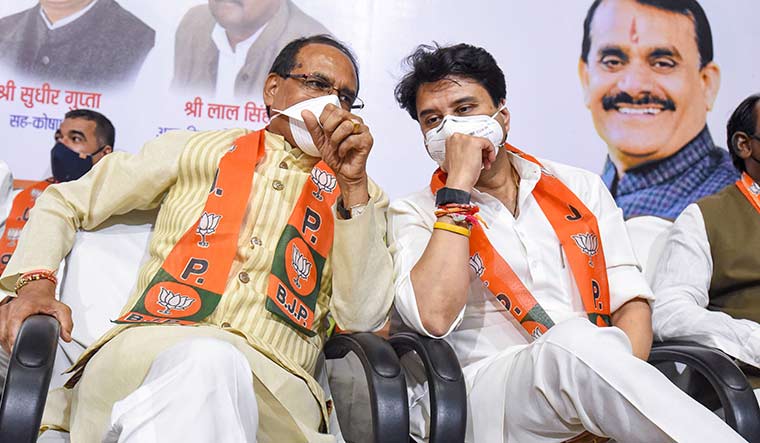 ON OCTOBER 10, Chief Minister Shivraj Singh Chouhan, dressed in a beige kurta and brown jacket, was seen kneeling on a dais with folded hands, his trademark smile pasted across his face. He was campaigning for cabinet colleague Hardeep Singh Dang in Suwasra in Mandsaur district, ahead of the byelections scheduled for November 3. That a four-time Madhya Pradesh chief minister would do this for a candidate who was an MLA in the rival camp till seven months ago made it all the more compelling.

The Congress made fun of Chouhan, saying that he had been brought to his knees by the 15-month Congress rule under Kamal Nath. But, political watchers say that the act was significant in the context of the crucial bypolls to 28 seats. Rajya Sabha MP Jyotiraditya Scindia was the key player in the game that saw the BJP regain power in the state in March, but Chouhan is the key to sustaining its nascent government. With his on-stage antics, Chouhan indicated that he was willing to use his most trusted weapon—humility—to achieve his task.

Even as Scindia slogs it out in his stronghold, Gwalior-Chambal, to ensure that his supporters win most of 16 seats in the region, the BJP has officially decided to make “Shivraj hai toh vishwas hai (With Shivraj there is trust)” its battle cry. Chouhan is addressing 90 to 100 meets—an average of three to four meetings per constituency. These meetings will be mostly solo, with only influential local leaders joining him. Also, only images of Chouhan and state president Vishnu Dutt Sharma grace posters and banners.

On the other side, Nath’s public meetings have picked up, albeit slightly marred by him seemingly referring to dalit leader and minister Imarti Devi as “item”. Scindia no longer seems to be the primary target and it is becoming clear that the battle of wits is between the two veterans, though it is probably Scindia who has more at stake. In what is being seen as a Congress strategy, the other big political face in its ranks, Rajya Sabha MP Digvijaya Singh, is strictly behind-the-scenes, despite BJP leaders baiting his “absence”.

Political commentator Manish Dixit says that the imminent polls are unprecedented as the future of a government in Madhya Pradesh has never hinged on bypolls. “But rather than the numerical outcome, the polls are far more crucial for three political stalwarts of the state,” he says. “It is about the popularity of Chouhan, the survival of Kamal Nath and the prestige of Scindia.” Senior political writer Rasheed Kidwai says that the results of the bypolls will decide if Scindia gets to move up in the BJP and adds that Nath will be giving his all in what could be the last battle of his career.

BJP chief spokesperson Deepak Vijayvargiya says that the campaign being focused on Chouhan is normal as the BJP’s campaigns are always led by the chief ministers in the states and the prime minister nationally. Scindia is a prominent leader and has a role to play, he says. Bhupendra Gupta, vice chairman, Congress media cell, says the party is projecting the achievements of Nath’s15-month government. He adds: “The BJP thought they had stolen a sword (Scindia), but it turned out to be [blunt]; they are forced to make do with their worn out coin (Chouhan).”

The BJP with 107 MLAs in the 230-member house needs nine wins in the bypolls for a clear majority. The Congress (88 MLAs) must win all 28 seats. But, the BJP has been forced to give 25 tickets to the Congress turncoats. This is thought to have made BJP cadre unhappy. If the Congress wins around 20 seats, the seven non-Congress opposition MLAs could come into play. The Bahujan Samaj Party, which has support in the Scheduled Castes-dominated areas of Gwalior-Chambal, is contesting in all 28 seats. It is likely to take its fair share of the votes in at least 10 seats in Gwalior-Chambal.

Avadhesh Tiwari, 35, a farmer from Jaisinagar, Sagar (Surkhi constituency), says that people are upset at the way the BJP candidate (minister Govind Rajput, who followed Scindia to the BJP) dealt with rivals and constituents during the Congress rule. The Congress candidate (former BJP MLA Parul Sahu, who beat Rajput in 2013), he adds, is “nice”, but her family does not have a clean image. “People are mostly concerned about development and getting a minister as the representative helps,” he says. “It will be interesting to see what happens; the polls will not be one-sided.”

In Pohri, Shivpuri, NGO worker Ajay Yadav, too, feels that the development agenda is the biggest factor. “People are upset at their MLA (Suresh Dhakad) defecting, but now he is a minister,” he says. “Lots of developmental works have been announced by the current government and while people are wary about whether they will take off, these things make an impression. The Congress’s Harivallabh Shukla has been MLA twice, but he, too, has changed parties. People are silently watching everything and we can say that the contest is tough here.”

Political analyst Shivanurag Pateriya says that during the last four assembly polls, the BJP got, on average, 6 per cent more votes than the Congress. It has also won 64 per cent of the seats. “But, if the people feel they were betrayed by their MLAs and upset BJP workers sit back at home, anything can happen,” he says. “If the turnout is 5 per cent more than the 2018 polls, the BJP should be alarmed, if not, it should rest easy.”