While Nitish Kumar & Co are confident, an assertive Tejashwi Yadav is causing concern 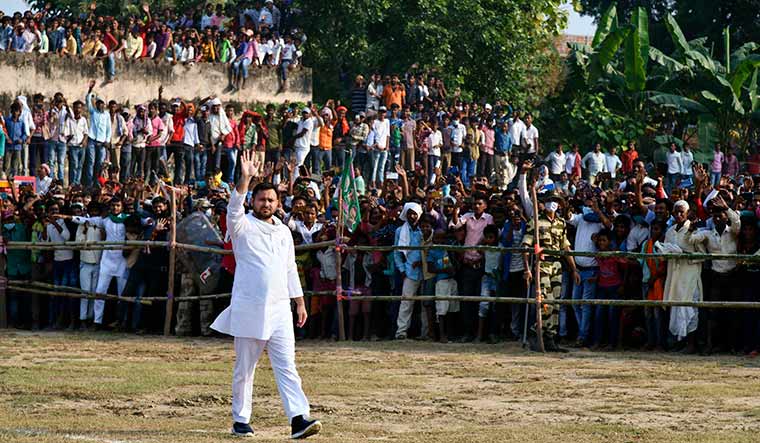 There is a brashness about Tejashwi Yadav’s campaign, as there is about his character—the brashness of a youngster who has nothing to lose. Senior leaders may dismiss it as a sign of immaturity, but it has put worry lines on the brows of his opponents. For, the youth seem to like it.

The son and political heir of Rashtriya Janata Dal supremo Lalu Prasad, Tejashwi is attracting Bihar’s youth, mostly the unemployed among them, in thousands to his rallies. Despite the Covid-19 scare and the strict rules imposed by the Election Commission, they are thronging to his meetings, and cheering his brash talk. Borrowing more than a page from the immensely popular campaign style of his father who is currently serving a prison term, Tejashwi has made his rallies a sort of a dialogue with his listeners. While talking about lack of jobs, he would exhort: “How many of you here are without jobs? Let me see. Please raise your hands.” And promptly, thousands of hands would shoot up in the air.

Adding to their anger, he would charge that four and a half lakh government posts have been lying vacant. Then, making the most out of the sentiment of anger and despair, he would offer hope. “If I become chief minister, the first cabinet itself will approve an order for creating a million jobs,” he promised, as applause and cheers rend the autumn air.

The Nitish Kumar-led Janata Dal (United)-BJP alliance had been counting on a fairly easy campaign till early this year with not much of an anti-incumbency feeling in the political atmosphere. The government had been doing well on most development scores, and even the opposition leaders had been privately conceding this. The desertion by Chirag Paswan’s Lok Janshakti Party had not ruffled the alliance’s feathers much, confident as they were that the young Paswan was not much of a vote-catcher, unlike his legendary father Ram Vilas. However, Tejashwi’s brash style of campaign has whipped up a latent anger, especially over the government’s handling of the Covid-19 crisis.

Most of the JD(U)-BJP lead campaigners have been stressing on the need for “double-engine progress”, meaning that it would help Bihar if there is a Centre-friendly government in Patna. However, Tejashwi has been picking out the instances of failures of the double-engine locomotive’s run in the last few years, especially how the Narendra Modi government at the Centre announced the lockdown like a bolt from the blue, and how the indigent Bihari workers who returned home on foot were beaten up by Nitish’s police. “This government does not deserve your forgiveness,” Tejashwi told the unemployed workers and their families. “I am only asking you to give me an opportunity to end poverty in Bihar, create jobs and bring about progress.” 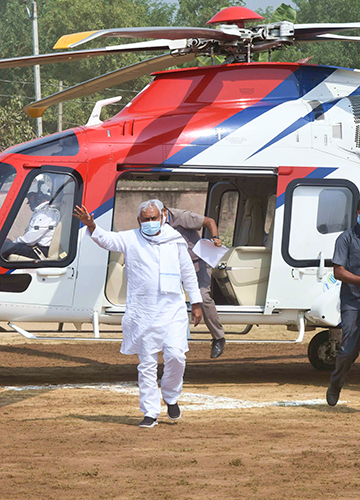 Holding the fort: Nitish Kumar at a rally in Aurangabad.

Indeed, the ruling alliance has been a bit complacent. They had been fairly certain of attracting votes in the name of the creditable progress that Bihar had made in the last decade and half of Nitish Kumar’s rule. Despite the BJP’s strong desire to have a BJP chief minister in Patna, they are loathe to express it in rallies or media interviews. On the contrary, they are at pains to reiterate that the alliance is contesting the polls under Nitish’s leadership and he will be their chief minister.

As much was clarified by none less than Prime Minister Modi himself. “Chief Minister Nitish Kumar has a very important role to play in taking Bihar forward on the path to progress,” he had declared in a meeting on September 13, setting the tone for a smooth campaign for the alliance. “We must ensure sushasan [good governance] in Bihar. The good work done in the last 15 years must continue.” The line has since been repeated by Union Home Minister Amit Shah and BJP President J.P. Nadda.

There had been concern in the JD(U) circles that the BJP was engineering the seat division in such a way that the national party would end up with more seats than the local partner, and then stake a claim for chief ministership. The assurances from the top trio of the BJP seem to have allayed those fears, and the state leaders—of both the BJP and the JD(U)—are focused on a campaign that draws energy from their record of good governance.

In his rallies, Nitish has been listing his achievements, and claiming that he has been successful in ensuring development as well as social justice, the latter having been the main political plank of the RJD. “Bihar has been rescued from Lalu Prasad’s jungle raj and now we can have kanoon raj (rule of the law),” is the JD(U) refrain. To buttress the claim, they point to the fact that Bihar, which was once notorious for its lawlessness, is now 23rd in the list of states with high crime records.

Perhaps the biggest surprise, and the most colourful feather on Nitish’s cap, is his claim to have schooled, employed and empowered more women in the notoriously feudal-minded state. JD(U) leaders point to the fact that girls outnumbered boys in the list of successful candidates in the last matriculation examination, that half the seats in the panchayats and town councils have been reserved for women, and that 1.2 crore women have benefited from the Jeevika self-help groups.

Indeed, women voters have been favouring Nitish in all the elections. And, this time he is going to the polls with a slogan ‘Sashakt Mahila, Saksham Mahila’(empowered women, able women), promising to grant Rs5 lakh and lend another Rs5 lakh to every woman who wants to set up a business. Grant to Class 12-pass girls has been hiked from Rs12,000 to Rs25,000, and for graduates from Rs25,000 to Rs50,000. The biggest promise, perhaps, is to reserve half the government jobs for women.

On the development front, Nitish is now promising to light up all the village roads with solar lamps, reach water to all farms, link all village roads to state and national highways, and better facilities and services in all village clinics. “In the last 15 years, Bihar has shown that development happens with the right government, decisions and policies,” Modi had pointed out. “Infrastructure has improved. New medical and engineering colleges, law institutes and polytechnics have come up. We are working for the growth of all sectors in Bihar.”

However, there is concern how all these would weigh against the miseries faced by millions in the Covid-19 season. Both BJP and JD(U) leaders are at pains to explain these. “Nitish Kumar took care of people during the Covid-19 crisis; financial assistance was also provided by his government to those outside Bihar,” Nadda claimed in his October 11 rally in Gaya.

Leaders of the ruling alliance say that the youth are flocking to Tejashwi’s rallies more out of curiosity, which they believe will be on the wane soon. “Wait till the prime minister takes to the field,” said a BJP leader when asked about the huge rallies of Tejashwi.