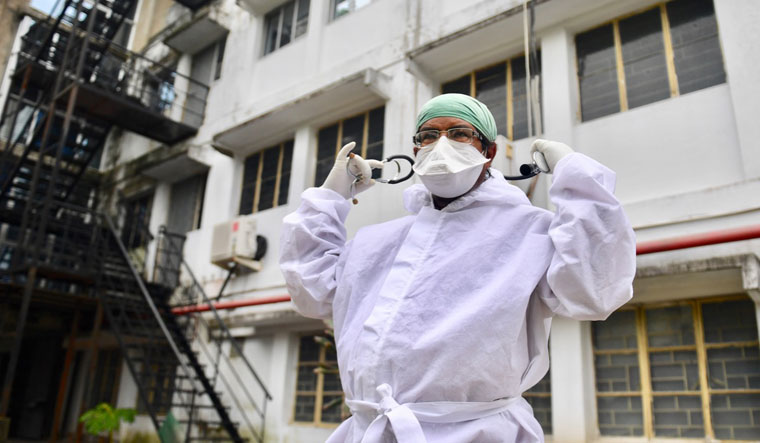 In the late 1970s, little Ajoy Mistry was a household help to a wealthy family in Hanspukur village in South 24 Parganas district, West Bengal. One day, he was sent to the local market to do the family’s shopping. Ajoy, who was 12, spent 10 paisa on a sapodilla plum (chikoo). The sweet taste was short-lived, as his employers thrashed him over the missing 10 paisa.

“No one rescued me even though I was crying profusely,” said Mistry, 55. “The locals knew the story behind my thrashing, but no one supported me.” Today, the little boy is Dr Ajoy Mistry and life has come full circle. He is now seen as the saviour of the villagers who had once turned their backs on him.

Covid-19 hit Hanspukur hard in May, a few days after super cyclone Amphan swept through South 24 Parganas. Mistry led relief operations across the area. Wearing personal protective equipment, Mistry ferried food, medicines, masks and sanitisers in an ambulance. Within a month, he reached around 4,000 patients, including pregnant women.

Bishnupur town, under which Hanspukur falls, is a major hotspot in South 24 Parganas. The spike in cases has been linked to the large number of migrant labourers who had returned home. Pathar Pratima, Kakdwip and Namkhana are also emerging as hotspots in the district. Mistry runs a 50-bed hospital in Hanspukur—Humanity Hospital—and a clinic-cum-hospital at Pathar Pratima.

Mistry’s mother Subhasini, 75, has been credited with founding Humanity Hospital with her meagre earnings as a vegetable vendor. Several news reports echoed this when she was awarded the Padma Shri in 2018. But, Mistry said there was more to the story than what was reported. “My mother’s hard work has always been my strength,” he said. “But the hospital was the result of my relentless struggle, [through] torture and insult. It is completely different from what people know.” Subhasini, too, said her dream of starting a hospital for the poor became a reality only because her second son became a doctor.

Today, the two hospitals give hope to thousands. Humanity Hospital is a government-approved Covid-19 hospital. It even has an intensive care unit, a rarity in any part of West Bengal, let alone a rural area; only half-a-dozen hospitals outside Kolkata have ICU facilities.

Bishnupur MLA Dilip Mondal said that he held a meeting with the local administration before designating Humanity Hospital as a Covid-19 centre. “Dr Mistry agreed; we are grateful to such people as they never questioned our decision,” said Mondal. “The doctor’s story is a guiding force for all of us. Moreover, the hospital is run efficiently.”

Mondal, who is a member of many health committees of South 24 Parganas, said: “Since this hospital has oxygen and other related facilities, we have decided to admit not only mild patients but also severe cases here,” he said. “We will shift them to Kolkata only if the situation worsens.” He added that though the hospital had necessary facilities, the administration would supplement it with more doctors and equipment.

On July 16, when THE WEEK spoke to Mistry, he was busy treating critical patients. “We have to fight day and night to save lives,” he said. “So, it is difficult to talk to you.” The rush of patients is forcing Mistry to stay at the hospital around the clock. “More patients are coming in every day, making it difficult for me to go out with my ambulance like I did at first,” he said.

But, he has already made a huge difference in the district. “He has travelled all over (the district) to track people with Covid-like symptoms,” said Sukumar Mondal, a panchayat member in Kakdwip. “He also gave people advice on how to cope with the disease. He gave nutritious food to poor mothers and pregnant women.”

Said Mistry: “I have felt poverty and humiliation; it prompted me to try to make a difference in society. I could have joined a good hospital and made money, but I did not do that.”

Mistry was four when he lost his father, Sadhan, to an abdominal infection. Sadhan had lost his land because he could not pay tax, and the family had no means of livelihood. Subhasini got Mistry a job at a tea stall as a dishwasher. “One day I broke a glass,” he said. “The owner hit me on my head and cheeks. I was crying, but the man had no heart. I also lost the job.”

His mother then found work for him at several households. Mistakes were punished in the same manner—public thrashings. His ragged clothes earned him the moniker “dustbin boy”. While everyone ridiculed him, no one bought him clothes, said Mistry. “I belong to a scheduled caste,” he said. “Perhaps, if I belonged to the upper caste, people would have helped me.” 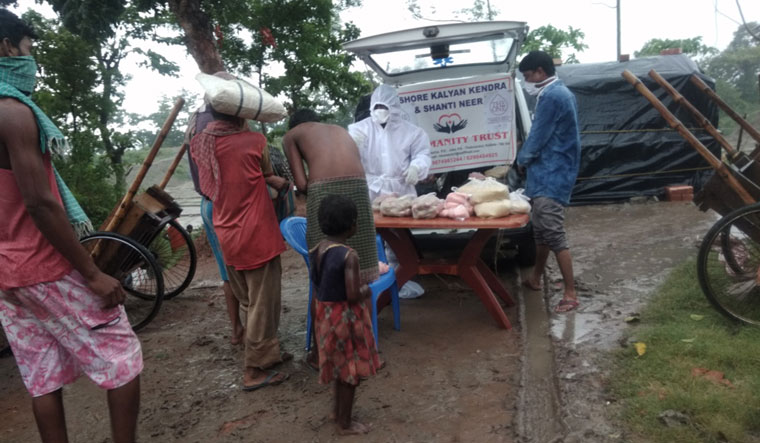 For the people: Mistry distributing free medicines in South 24 Parganas

The turning point came when he was admitted to an orphanage at Bishnupur. The man who ran the orphanage took him under his wing. “It was the greatness of Jyotish Chandra Ray, who I used to call uncle,” said Mistry. “He allowed me to stay at his home and study in school.” Mistry excelled at studies. “I not only used to study, I used to work in villages and go to remote places to bring many boys like me to the same orphanage,” he said.

Meanwhile, after leaving her son at the orphanage, Subhasini and her two daughters went to Tiljala near Park Circus in Kolkata to earn a living selling vegetables. Mistry completed his schooling with distinction, cleared the all India medical entrance examination and received a scholarship from a German organisation. He moved out of the orphanage and started tutoring the nephew of a rich farmer, who was childless. He was given accommodation and food in return.

Thanks to Mistry’s efforts, the boy who used to fail exams started scoring more than 90 per cent. His uncle was pleased and wanted to give Mistry one of his many houses in the area. Mistry saw a chance to build a hospital for the poor and put forth the idea. The man accepted, but later backtracked because his relatives felt that Mistry was trying to grab his land. “One day, they beat me up while I was going to write an examination in the medical college,” he said. As per the advice of his professors, he lodged an FIR against them. “But, they were in positions of power in the panchayat; the police did not take any action,” said Mistry.

Instead, he was attacked again on his way to college. But this time, he retaliated. “As a result, a police complaint was lodged against me as well,” he said. As his enemies were linked to the Congress, he got the support of the local Communist Party of India (Marxist) leaders. As his education progressed, he began tutoring more students to make ends meet. In the early 1990s, he bought a small patch of land in the village. The CPI(M) leaders told him that they would build a hospital and name it after his father. But, he refused. “I told them I have no desire to name it after my father and it would only be for humanity,” said Mistry.

He built a thatched-roof hut and brought his mother to stay with him. By that time, his elder brother had started a small business and his sisters were married. On December 31, 1992, while he was still in medical school, he declared he would see patients free of cost from his hut. It made local communist leaders angry. The potential threats were dealt with when, with the help of one of his professors, Mistry brought then health minister Prasanta Sur to lay the foundation stone of the hospital.

Soon, he received donations from many people and was able to build a permanent structure. He completed his MBBS from Calcutta Medical College and Hospital in 1995 and his MD from the same college two years later. Many of his former professors also began frequenting his hospital as guest doctors. It took 20 years to get the hospital going in full swing. However, he could not save his elder brother who had congenital heart disease. He refused to undergo surgery as he felt it was too risky and died two years ago.

What about the people who called him “dustbin boy” or thrashed him? Mistry said he sees them looking at him while he is working. “Some give threatening looks,” he said. “Others have apologised, but I tell them they are not guilty. I was the victim of a society which taught them to do so.”