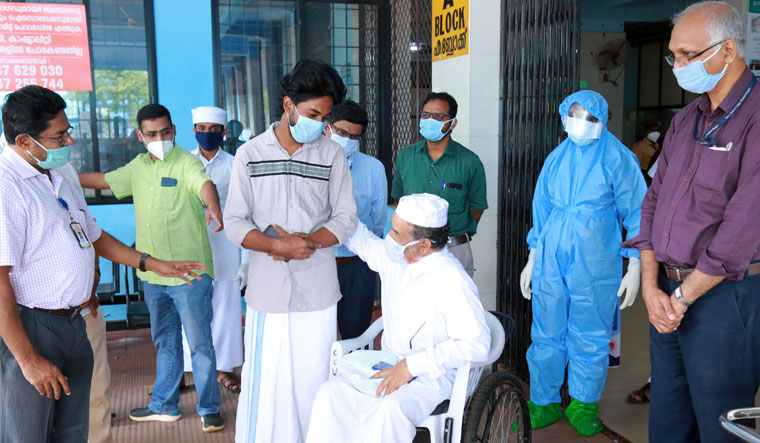 Unique bond: Vineeth Ravi who donated plasma to M.K. Sainuddeen Bhaqavi (in wheelchair) on the day of the latter’s discharge from the Government Medical College in Malappuram: Prasad Manjeri

It was raining heavily when Vineeth Ravi got the call from Dr Shinaz Babu, the nodal officer for Covid-19 at Government Medical College, Malappuram. “I picked up the phone thinking it was a casual call,” said Ravi. “He calls me up regularly to check if I am OK, though it has been almost a month since I had become Covid-19 negative.”

But this was more than a regular call. Babu had a request. “Doctor told me that a Covid-19 positive patient was very critical, and asked me whether I was ready to give blood for administering plasma treatment,” said Ravi, 23. “I immediately said yes. How could I say no to a doctor whose medical team risked their lives to save mine?”

Ravi, who holds a diploma in mechanical engineering, had contracted the virus during his stay in Chennai. “The situation in Chennai was so bad that I rushed back to Kerala immediately after the lockdown was lifted,” he said. “I tested positive and was admitted to the medical college. I am alive now because of the care given to me by Dr Shinaz and his team.”

When the request came, Ravi did not think twice, but Babu insisted that he get the permission of his parents before going ahead with it. Ravi asked his mother and she agreed. “She told me that it was my responsibility to repay those who saved my life,” he said. “She also told me that there is nothing greater than saving another life.”

Though Ravi’s home is 60km from the hospital, he reached the hospital within two hours of the call. “I told Vineeth that I would send a vehicle for him. But he said he would come on his motorbike,” said Babu. “It was raining heavily. I got worried seeing him as it had been only 22 days since he had been discharged. But Vineeth showed no signs of weakness and gave the required amount of blood.”

That blood has now saved a life.

It was M.K. Sainuddeen Bhaqavi, who works as an ustad in a mosque in Oman, who received Ravi’s blood. Now, Bhaqavi has been discharged, becoming the first Covid-19 patient in the state to recover after receiving plasma treatment.

Bhaqavi comes from a family of traditional ustads (religious scholars). All of his eight brothers are ustads in various mosques in Malappuram. Only Bhaqavi had gone abroad and was working at a Sunni centre in Buraimi, Oman, for more than a decade. He was the president of Santwanam, a charitable society that helps NRIs. He returned to Kerala on June 6 and went straight to the medical college as he felt feverish. He tested positive for Covid-19; his condition worsened due to comorbidities and he was shifted to the ICU. But his health deteriorated further.

It was then that Babu called Ravi. “Bhaqavi’s condition was very bad,” he said. “We went for plasma treatment as the last hope.”

Malappuram district has one of the highest number of Covid-19 cases in the state, thanks to its NRI population. Two of the patients that the medical college had tried plasma treatment on before did not respond to the treatment. But it worked well for Bhaqavi.

“He told us that the hospital staff looked after him like a mother would look after her kids,”said Bhaqavi’s brother Sharafuddeen, seated next to him. It had only been a day since Bhaqavi’s discharge and he was not in a position to talk much. “He used to reassure us over phone that there was nothing to worry as he was in safe hands,” said Sharafuddeen.

When Bhaqavi came to know that it was Ravi’s blood that saved him, he wanted to meet him. Babu arranged for it and the duo met on the day Bhaqavi was discharged. “He held my hands for a few moments and told me that there is no greater thing than saving lives,” said Ravi. “I thought of my mother then as she too had told me the same. She had prayed every day for the person who was now thanking me.”

Bhaqavi gifted Ravi some chocolates, too. “I had no idea for whom I was giving blood. Blood has no religion and it was proved once again when I met him,” said Ravi.

According to Babu, the meeting was a great experience. “We develop a special bonding with all the Covid-19 patients by the time they are discharged and it was great to see someone who got cured from here coming back to help cure others,” he said.

The government medical college has done five plasma treatments so far. While two showed no response, others responded well, the doctor said. The state has so far done seven plasma treatments. So how do they choose blood donors?

“We keep track of every patient even after their discharge as part of the protocol,” said Babu. “Plasma can be taken from those who have turned Covid-19 negative and fall in the 18 to 50 age group. Also, they should be having no comorbidities. So, whenever blood is required, we contact the patients who meet the requirements. We have received only positive responses from them so far.” 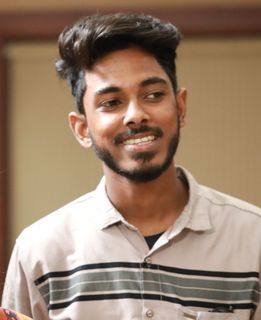 Shahul Hameed, another former Covid-19 patient in Malappuram, said that anybody who received treatment in the medical colleges in Kerala would say yes to the requests. “Such is the care we have received from the medical team here,” he said. “Right from the doctor to the sweeper, all of them have taken pains to save our lives. We owe our life to them.”

Hameed, who works in a transportation company in Abu Dhabi, had returned on May 7. He tested positive while in the state-run quarantine centre, and was immediately shifted to the medical college. “When one is in isolation, one has limited contact with others, and the way those few treat you matters a lot,” he said. “It is the love, care and the food provided at the hospital that has brought me back to life. Donating blood is my small effort to repay those who helped me. Also, I understand the insecurities of a Covid-19 patient very well as I was also one.”

It was one Rajeev Kumar (name changed) who received blood from Hameed. An assistant sub-inspector with Delhi Police, Kumar tested positive two days after his family reached Kerala on June 17. He received blood from Mohammed Basheer, too. According to doctors, Kumar is showing good improvement after receiving plasma treatment.

“When the doctor told us that two of his former Covid-19 patients had agreed to give blood to my father, we were so relieved,” said Kumar’s son. “I immediately asked for their numbers and called them up to thank them. That Hameed and Basheer readily agreed to give blood to someone whom they have not even seen, immediately after recovering from an illness, is a great act of love.”

“I felt so happy when I got the call from the son of the patient to whom I had given blood,” said Hameed. “That call has made my life more meaningful.” Ravi feels the same. “That my blood was useful in saving somebody’s life has made my life worthwhile,” he said.

Both hoped that these tales of love from Malappuram would help clear the misconceptions about the district. “Ours is a regular district like any other,” said Ravi. “The proportion of one religion may be higher than the other, but that has not stopped us from loving each other.” Hameed, Bhaqavi and Kumar could only concur.