Enough is not enough

Palaniswami government cannot hide its mismanagement of the pandemic 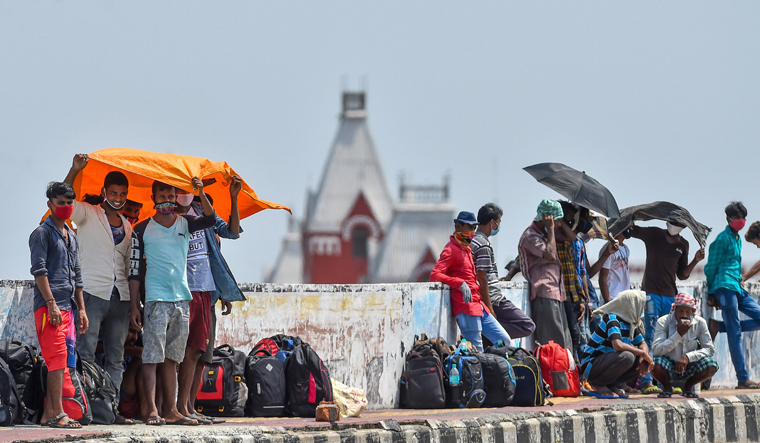 Home, bound: Migrant labourers wait near the Chennai railway station, looking for a way to return to their native states | PTI

On May 31, the last day of lockdown 4.0, as the Tamil Nadu government issued orders for phased unlocking, 1,149 fresh cases and 13 deaths were reported in 24 hours. The daily count had touched a four-digit number for the first time. The 804 fresh cases from Chennai continued to worry medical professionals. But with the increased testing, high recovery rate and low mortality, the government indicated that all was well in Tamil Nadu.

“There is nothing to panic,”said J. Radhakrishnan, special nodal officer for Chennai corporation, appointed to coordinate Covid-19 efforts. “The situation is completely under control.” He emphasised that the spike in cases was because of increase in testing. But the situation is contrary to what Chief Minister Edappadi K. Palaniswami predicted, on April 17, when he said that “the number will come down to zero” within three days, and called it a “disease of the rich”. Tamil Nadu now has over 23,000 cases, of which over 10,000 are active. The government might deny it but epidemiologists say there is “widespread community spread” in parts of Chennai.

“What we are seeing now is that the cases are increasing at a linear pace. We might not see a declining trend as in Italy or China, in the next few weeks,” said Dr Shanthi Ravindranath, a senior gynaecologist and secretary of Doctors Association for Social Equality. In the last two weeks, people tweeted about the poor levels of testing. Their posts suggested that only one person per family was being tested, even if the others had symptoms. For instance, a 58-year-old woman in Royapuram, one of the most affected areas in Chennai, died just a day after she developed symptoms. While her son, who had tested positive, was shifted to the government hospital in Omandurar, she was turned away from the testing centre.

The government maintains that the health department is doing more tests than other states (11,300 on an average per day), but experts feel it is not enough. “There is no point in [arguing] about the presence of community transmission,” said Dr J. Amalorpavanathan, former director, Institute of Vascular Surgery, Madras Medical College. “The focus now should be on testing asymptomatic patients, tracking their contacts and isolating and treating them. The government has to focus on increasing the testing inside the containment zones.”He says the very purpose of introducing more testing centres in the state in May has not been served.

“The virus will take its own course,” said Dr Jayaprakash Muliyil, epidemiologist and former principal of CMC, Vellore. “At the moment, there is community transmission. I don’t think the government has to feel embarrassed about it. This is not their failure, because this is the nature of the disease and this is how an epidemic grows.”

On March 7, when Chennai detected its first Covid-19 case, the chief minister and his colleagues maintained that only children and the elderly were vulnerable, and the infection would not spread. Three days after Palaniswami said that the number would come down to zero, the number of cases per day was in three digits. And since May 3, the number has exceeded 500.

“This was the result of an unplanned lockdown,” said Ravindranath. “The chief minister calling for a strict lockdown within a lockdown led to the Koyambedu cluster and then came the increase in numbers.” The state first blamed the people who returned from the Tablighi Jamaat event in Delhi for the rise in cases, then the Koyambedu cluster. Then, on May 20, the health department’s bulletin pointed fingers at those coming from other states.

The government also kept changing its stance on announcements. TASMAC liquor stores were reopened on May 6 but closed the next day as social distancing was not followed. Later, Kamal Haasan’s Makkal Needhi Maiam went to the Madras High Court, which then ordered for closure of the shops. The state government appealed to the Supreme Court and the shops were opened again, except in Chennai. Another major incident was regarding the Class 10 public exams. The government first scheduled the exams for June 1 and later postponed it to June 15, when even public transport will not have opened in full swing.

The state has denied permissions for flights that would bring in Tamils living abroad, unlike what neighbours Kerala and Karnataka did for their stranded residents. Highly placed sources in the state health department say that this is because of lack of quarantine facilities for non-resident Tamils.

The state constituted 18 expert committees to handle the pandemic but none of those have released a proper set of recommendations till date, except for the medical expert committee. On the other hand, Palaniswami is growing insecure of his own people. When Health Minister C. Vijayabaskar started becoming popular for dealing with the crisis, he was sidelined. The responsibility was given to health secretary Dr Beela Rajesh; but when her press briefings drew praise, the chief secretary was asked to take over. Eventually, Palaniswami delivered the daily briefings himself. The early announcement of the opening of the Mettur dam for irrigation in the Cauvery delta was allegedly staged to cover up the poor handling of the pandemic.

Despite growing concerns, on June 2, Palaniswami once again said that the government is working hard to contain the pandemic. He highlighted the fact that the death rate was less than 0.80 per cent. “We need not panic,” he said. “The infected are being treated and we ensure that they go back home.”