Regardless of result, the women's performance could change Indian hockey 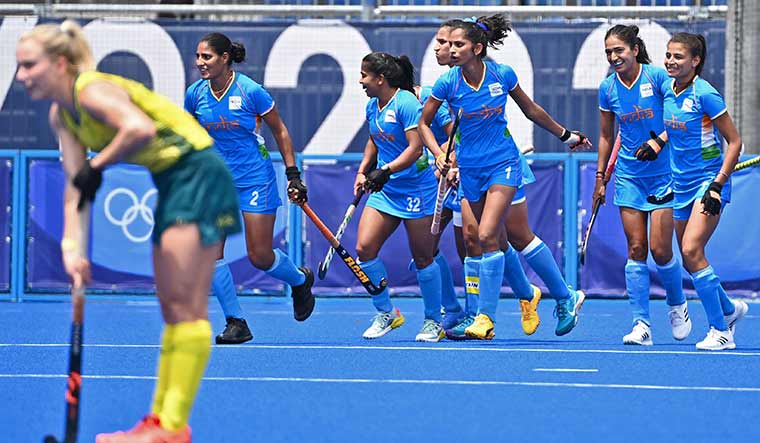 Dream run: Indian players celebrate after scoring in the quarterfinal against Australia | AP

If there is one thing that the Indian women’s hockey team knows, it is survival. On the field or off it. Captain Rani Rampal’s family has fought poverty; her father was a tonga puller in Shahbad, Haryana. Midfielder Neha Goyal, 24, escaped an abusive, alcoholic father; she worked with her mother in a cycle factory to earn two meals a day. Defender Nikki Pradhan, 27, hails from Hesal, a Naxal hotbed in Jharkhand; her sister worked as a labourer to buy her a hockey stick. Midfielder Nisha Warsi, from Sonipat, Haryana, found encouragement in her tailor father, but her wings were clipped when a paralytic stroke hit him. Her mother worked in a foam factory to make ends meet, and Warsi eventually made it to the national team.

It is this grit and determination that shocked powerhouse Australia in the quarterfinals in Tokyo. This was the third time the Indian women’s team had made it to an Olympics—the previous being Moscow 1980 and Rio 2016—and this was its most successful outing. In Rio, the team finished its campaign without a win.

Five years later, the women had a disappointing start once again; the Netherlands beat them 5-1. They then lost to Germany and Britain. A repeat of Rio was on the cards. The aim was a quarterfinal finish, for which they had to beat Ireland and South Africa. They did it. “We did not have many practice matches before the Olympics, so we kept telling the girls to improve with every match,” chief coach Sjoerd Marijne said of the early matches. “After we lost to the Netherlands, it looked as if everything was shattered; it was not. We only needed to make a few small improvements.”

Before the Olympics, the Indian women had been together on the Sports Authority of India campus in Bengaluru for 18 months. Their lone tour in 2020 was to New Zealand; they then toured Argentina and Germany in January and March 2021. That was the only international exposure heading into Tokyo.

Life on campus was no vacation either. There were strict Covid-19 protocols in place.

It would have been all worth it if they made it to the semi-finals. They did so by strangling the Australians. They themselves struck once and entered the semi-finals to take on Argentina. There, they fell 1-2 to end their quest for gold. They had, however, won hearts and hope for the future.

Dare to dream, Marijne had told his players before and after the quarterfinals. He also showed them a movie—about staying in the moment—on the eve of the match against Australia. “I told the players that at the end of the match, they shouldn’t [be able to] feel their legs after running so much. The defensive structure during penalty corners was very good. If you start believing and you keep believing and you keep working hard, things can happen.”

The result shocked the entire hockey world. Even back home, it took time to sink in. Col Balbir Singh, member of the bronze-winning team at the 1968 Mexico Olympics, and coach of the women’s hockey team in late 1990s, said, “We had the upper hand in the first half. That is when I started thinking that this team can do something.”

Said Dr Anil Kumar Bansal, a hockey coach who has given India a steady stream of talented players: “Yes, for many it was an unexpected result, but the girls played so well. The combination of attack and defence was good.”

Said Sita Gosain, former Indian hockey captain: “Every match at the Olympics is difficult. But Australia didn’t play well. It also shows that if you prepare well and execute your plans well, you can beat anyone. Qualifying for the Olympics is in itself so difficult, we know it.”

Post-Rio, the Indian team had to depend largely on a few players like Rampal, goalkeeper Savita and forward Vandana Katariya. However, in Tokyo, several youngsters have risen to the occasion. “Girls like Neha Goyal, Sharmila Devi and Gurjit Kaur have all done well this time, which is very heartening to see,” said Sunita Dalal, member of the Indian team that won silver at the 1998 Asian Games in Bangkok. “The forward line has combined well, but for me the standout has been the defence.”

There was also a lot of focus on fitness. Hockey India’s scientific adviser Wayne Lombard will get a lot of credit for that. Before leaving for Tokyo, Marijne had said: “There will be the likes of Australia and the Netherlands who are physically stronger, but that doesn’t matter. We have fast hands. For the past year, Wayne has worked a lot on their strength and speed.” The results were evident—the players kept pace with the Aussies, never giving them a chance to find space. Marijne also roped in former USA women’s coach Janneke Schopman to help fine-tune tactics and technique during the lockdown.

One of the areas where the Indian team had appeared vulnerable was penalty-corner conversion, but Gosain pointed out that, traditionally, it had never been India’s strong suit. However, when it mattered the most, drag flick specialist Kaur fired one in against Australia.

Dalal felt that it was the forward line that needed a bit more work. “If we cannot score goals, how long can the defence save us?” she asked. She added that the team needs to be more proactive in creating chances inside the D for penalty corners. “In big matches you cannot let these chances go to waste. That needs improvement,” Dalal said.

Experts said that, regardless of the final result, the Indian women’s “real Chak de” moment in Tokyo will do a lot to boost the game back home. “They have made history with this performance. They have [delivered] more than what was expected of them,” said an ecstatic Ajit Pal Singh, former World Cup-winning captain.

Added Bansal: “This performance will change everything in the country as far as women’s hockey is concerned.”

With the Paris Olympics three years away, Indian women’s hockey will have its hands full trying to build on the gains from Tokyo. The dream has only just begun to turn into reality.