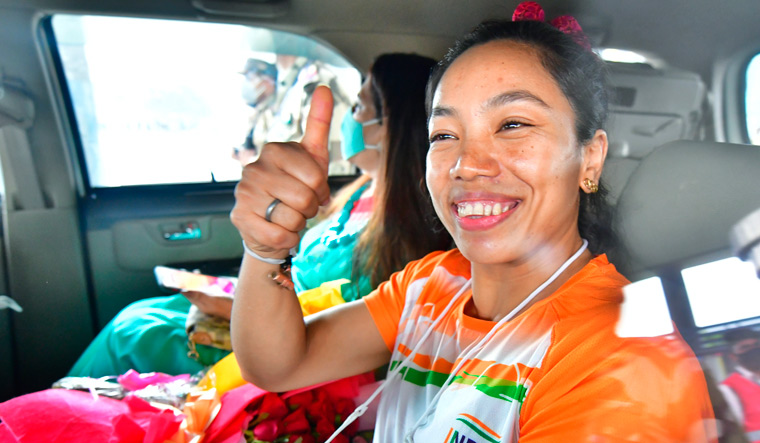 Saikhom Mirabai Chanu is a stickler for the rules. Not once since she completed her competition in the women’s 49kg weightlifting event did she remove her mask, be it on the podium or in the athletes’ village or at the Narita International Airport on her way back to Delhi. When she made her way out of the arrival hall at the IGI International Airport, surrounded by a bevy of security men, the mask was intact. Only when she was away from the crowd did she unmask.

And, not even once did she complain about the media frenzy that greeted her when she landed in Imphal. The endless stream of visitors, the countless social engagements, the felicitation programme at the City Convention Centre hosted by Manipur Chief Minister N. Biren Singh, Chanu coped with the sudden attention with no complaints.

Ever since she became the first Indian weightlifter to win an Olympic silver on July 24, days and nights have passed in a blur. “People are happy for me. I am a bit tired, but it feels good. My family and I have waited for this day, made so many sacrifices,” she told THE WEEK from her home in Nongpok Kakching in Imphal East district.

Chanu, 26, came home last five years ago, and she wanted to spend time with her family. But that seemed impossible. She slept at 2am on the day she arrived, as visitors kept coming. Day two was jampacked with interviews and social engagements. She woke up at 6am and did manage to enjoy her mother’s fish curry and rice, something that she had been hankering for after winning the medal.

Heady moments kept hitting Chanu after her moment of glory. The most unforgettable one was a phone call from Prime Minister Narendra Modi. “That is my favourite moment when after the competition PM Modi ji called to say thank you! He said I had done wonders winning the first medal on the first day of the Olympics. I can never forget that phone call,” she said. Manipur has decided to appoint her additional superintendent of police (sports). 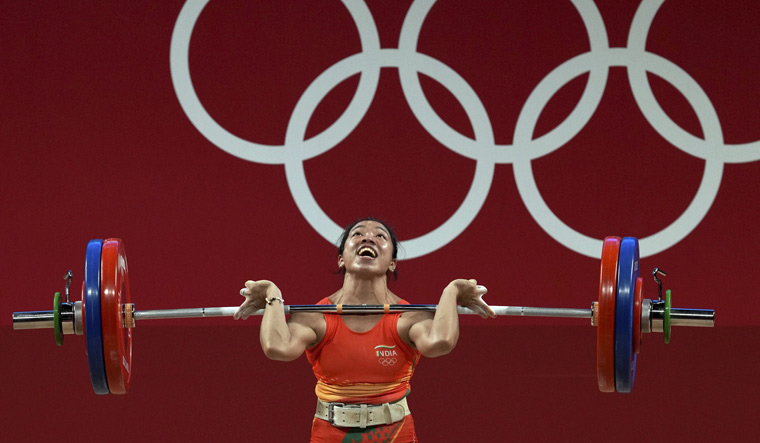 It is her simplicity, discipline and humility that made the 4’11” Chanu stand out in a group of junior weightlifters back in 2014. “What stood apart in her was discipline and determination,” said coach Vijay Sharma. “I felt she had something special. She has achieved what she has because of these qualities.”

Weightlifting in India has had its share of taint and controversies owing to doping scandals, and occasional highs. India’s only previous Olympic medal in the sport was the bronze in Sydney in 2000 won by Karnam Malleswari. Chanu’s achievement is perhaps what the sport needs at the moment. Nobody knows it better than Malleswari. “How will the sport get popular until we take it forward? When I won the medal, there was not much awareness or support, but things are different now. There are problems in all federations, but in weightlifting, it was highlighted. There has been a sort of a clean-up now. So hopefully things will only get better from here,” said Malleswari. 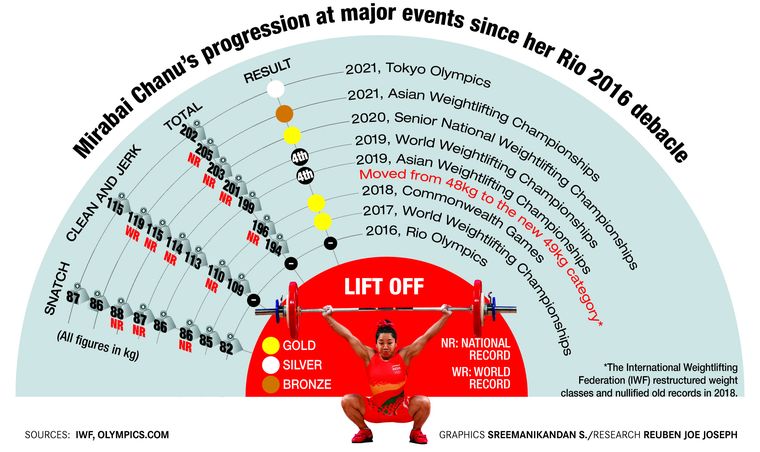 Chanu has not had it easy. In fact, far from it. She and Sharma had embarked on a tireless journey seven years ago. A silver at Glasgow Commonwealth Games in 2014 was the first breakthrough. Then came the big challenge of the Rio Olympics in 2016. That she had the talent was undisputed, but was she ready? Rio turned out to be a disaster as she failed to lift any of the three attempts in clean and jerk. Scarred by the setback, she started questioning her abilities. It took a lot of motivation and pep talk from Sharma to get her back to training. “I was disheartened with the Rio performance. I could not win anything. But sir made me understand and come out of my depression,” she said.

The Rio debacle meant Sharma had to redraw the entire strategy, including the way Chanu trained. “That setback taught us we had to work hard with more determination and focus. We changed our training path and strategy. The results came in 2017 (World Championships), and we got a medal in 2018 (Commonwealth Games), too. There was consistent growth. Mira has done nothing but eat, sleep and train. Two and a half years were spent on qualification, and one and a half years were gone due to the pandemic,” said Sharma.

Chanu staying away from family meant Sharma had to follow suit. “Initially it took some adjusting, but my family gradually understood why I was away from home. There was no Holi or Diwali with the family in the past few years,” said Sharma, who is from Ghaziabad.

The new training regimen was tough. Muscle memory, for one, is not so easy to erase. After years of working in a particular way and then changing into an entirely different way took time to master. “To change the technique at the base level, it is even difficult to explain. But she worked hard and results came with 75-80 per cent change in that technique,” said Sharma. In the 2017 World Championships, Chanu won the gold medal in the 48kg category by lifting a meet record of 194kg in total (85kg in snatch and 109kg in clean and jerk). “For some time it was very difficult to adapt to the new technique, but then I got used to it gradually,” she said. 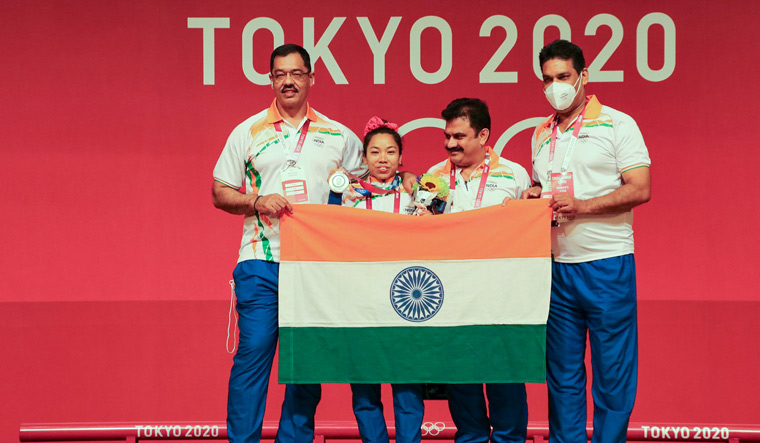 Team work: Chanu celebrates with coach Vijay Sharma (to her right) after receiving her medal | PTI

The new technique brought in not just medals, but also plaudits from her seniors. “Her technique is very good,” said Malleswari. “She executed the snatch with remarkable stability [in Tokyo].” Snatch was Chanu’s weakness, and a lower back injury in 2018 and the lockdown in 2020 resulted in her losing muscle mass. That was when Sharma and Mirabai went to St Louis in Missouri. Two training stints in the US with Dr Aaron Horschig, a former weightlifter and strength and conditioning expert, strengthened her shoulder muscles and took care of the lower back problem. The second stint lasted three months ahead of Tokyo when she also worked hard on improving her snatch technique. In April 2021, she won the bronze at the Asian Weightlifting Championships in Tashkent, lifting 86kg in snatch and a world record 119kg in clean and jerk.

The ghost of Rio had been buried. Or that was what she thought till the night before her competition in Tokyo. “I was more nervous in Tokyo than in Rio before the competition. Everybody had expectations of me and I felt the pressure. But then I decided to just focus on what I did in my training and execute that,” she said.

Sharma, too, went without sleeping a wink on that night thinking about the event. He did not sleep the following night as well, reminiscing about their journey. “The lesson learnt from this experience is that life is an experiment,” he said. “You have to keep trying and then you get the result.”