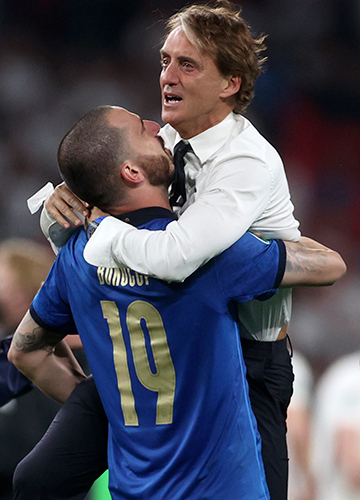 One of the lasting images of the UEFA Euro 2020 final will be of Italy captain Giorgio Chiellini’s Zen-like visage as the notorious English crowd booed the Italian national anthem. Chiellini, 36, stood with his eyes closed, chin up and with a flicker of a smile on his face. The hostility was not going to spoil his day, because nobody enjoyed this Euro as much as he did.

Throughout the tournament, in tense moments or even after committing fouls, Chiellini wore a smile, transmitting calmness to his teammates. He celebrated every crucial clearance by his team as if it were a goal scored. The bearhug he wrapped Spain captain Jordi Alba in, at the coin toss for extra time in the semifinal, unnerved the latter. Chiellini was a warrior and a giddy child at the same time; sword in one hand, bubble gun in the other.

It is this strange combination that got the team past the finish line, beating England on penalties to win their first European trophy in 53 years. Il Capitano’s energy and enjoyment were just what the doctor—head coach Roberto Mancini—had ordered. For decades, Italian football had attracted contempt for being too pragmatic, too negative with their iconic catenaccio system that put excessive emphasis on defence. The Italians did not care as it won them four World Cups. But Mancini knew that a revolution was necessary to succeed in these times. In a tournament filled with captivating and heartwarming tales, the rebranding and revival of Italy was a narrative that emerged above the others.

Following the ignominy of failing to qualify for the 2018 World Cup, the Italian football association found few credible takers for head coach for a team that showed little promise. The hiring of Mancini, whose career had nosedived since winning the Premier League with Manchester City in 2011, was perceived as a lack of ambition. In retrospect, it seemed like the right move, as his new philosophy had aligned with a churning developing in the Italian domestic league.

Italian teams like Atalanta, Sassuolo and Napoli were ditching the Italian style of defending for more offensive styles considered anathema in the country. The bigger teams started taking notes when legendary former Italian coach Arrigo Sacchi slammed reigning domestic champion Juventus in 2019, after the team lost to plucky Dutch side Ajax in the Champions League quarterfinals.

“In Italy, soccer is still defensive and individual, whereas in Europe it's necessary to offer a more offensive and collective approach…. Glory in soccer is achieved by teams that make beautiful play an integral ingredient,” Sacchi had written in Gazzetta dello Sport. He would know. In the late 1980s and early 1990s, Sacchi tasted success by trashing the Italian football rulebook and implementing elements of the Dutch Total Football that was mesmerising the world. But it stopped with him.

Now, Sacchi is delighted to see the systemic changes being implemented to that effect. A few months after his criticism of Juventus, he would praise his former player and the current national team coach Mancini for the creativity and sense of adventurism he instilled in his players. It was a bold move to change an age-old formula that Italians stubbornly refused to forego. A failure to succeed with this new philosophy would have invited the wrath of fans and forever consigned Mancini to the category of failed optimists.

To Mancini’s relief, this change in mindset in Italian football would be pathbreaking. On the domestic front, Italian teams scored 1.53 goals per game in the recently concluded season, outscoring their English Premier League (1.35), Spanish Liga (1.25) and German Bundesliga (1.52) counterparts. This is unprecedented for the traditionally low-scoring Italian sides. Attack, attack, attack is the new Italian way of football.

On the international front, the journey led to the team transforming from dour, unimaginative customers to the real entertainers of Euro 2020. Just before the loss against Sweden in 2017, which denied Italy a place the 2018 World Cup, Chiellini ranted to the media that possession football was “ruining a generation of Italian defenders”, and was bitter that it had become the norm across Europe rather than a tactical switch of play. Four years on, the centre-back was cheerfully charging with the ball up the field, spraying passes around. 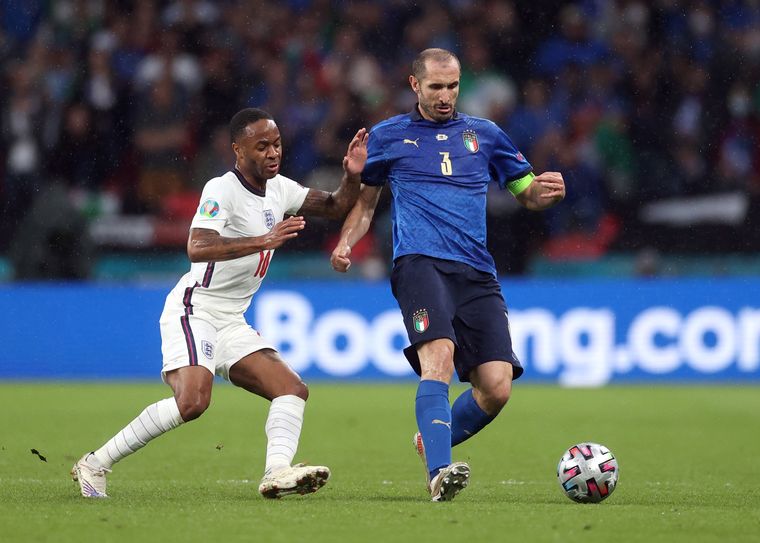 Pass and move: Chiellini (right) wrests the ball from England's Raheem Sterling in the final | AFP

That Italy had 66 per cent possession of the ball against England in the final, and took 19 shots on goal (as against England’s six) says more about Italy’s attack-mindedness than it does about England being defensive. England’s opening goal, scored by Luke Shaw, came in just the second minute—a rude shock to the Italians, but they did not abandon the philosophy they had carefully adopted. For the remaining 118 minutes, Chiellini and defensive cohort—Leonardo Bonucci, Emerson, Giovanni di Lorenzo and goalkeeper Gianluigi Donnarumma—held fort and were practically impenetrable.

In Mancini’s 37 games in charge, the team has never conceded more than one goal, and is now on a 34-match unbeaten streak. Two more games without a loss and they will have the longest unbeaten run by any national team in football history—Brazil (1993-96) and Spain (2007-09) hold that record.

Despite these impressive runs and figures, Italy did not arrive at Euro 2020 with any big stars. An ageing defence and an insipid attack were not cut out to be champion material. Forging a winning team out of these players shows the genius of Mancini. He had shed his club-football image of being a troublemaker and an attention-seeker, and taught his wards the benefits of camaraderie, positive football and playing for each other. The whole was turning out to be greater than the sum of the parts.

Before every game, Mancini would tell the media he wanted his players to “have fun”. He knows a thing or two about what it means to pull on the national shirt, but his biggest regret was that he never got to play at a World Cup. And so, he ensured that his players did not suffer the same fate of missing out on a big tournament. He played 25 of the 26 players in his squad in just the three group stage games of this tournament, even bringing on veteran goalkeeper Salvatore Sirigu for a few minutes against Wales. This worked as a morale boost for the whole squad.

The grey-suited coaching staff that Mancini assembled also tells a story in itself. He roped in set-piece specialist Gianni Vio, a former banker, who reportedly has an arsenal of 4,830 different set-piece routines. But the most notable inclusion is that of best friend and former strike partner Gianluca Vialli as chief delegate of the team in 2019. Vialli had been battling pancreatic cancer and it affected Mancini emotionally. He invited his friend to join him in the national team. Vialli’s very presence, that of a fighter who successfully beat cancer earlier this year, pushed the players even further to reach for the stars. The image of Mancini and Vialli, Sampdoria’s ‘Goal Twins’, celebrating the win against Austria to reach the quarterfinals gave Italians goosebumps.

The team will now turn their attention to Qatar 2022. They will have to prove their mettle on the grandest stage. Italy is one of the only two countries to win back-to-back World Cups. But since their 1938 victory, every time they reached the final of a World Cup or Euro, they failed to make it past the quarterfinals of the subsequent big event. Mancini can ensure legendary status for himself if he does what only France and Spain have done before
—win the World Cup-Euro double on the trot.

For this, he will be closely watching and scouting local talent to bolster his squad. The Bonucci-Chiellini duo needs long-term replacements while the search for a world-class striker continues. But more than anything, he will need to ensure the mood in the camp and the determination to win with
entertaining football remains constant.

Then, the revolution would be truly complete. 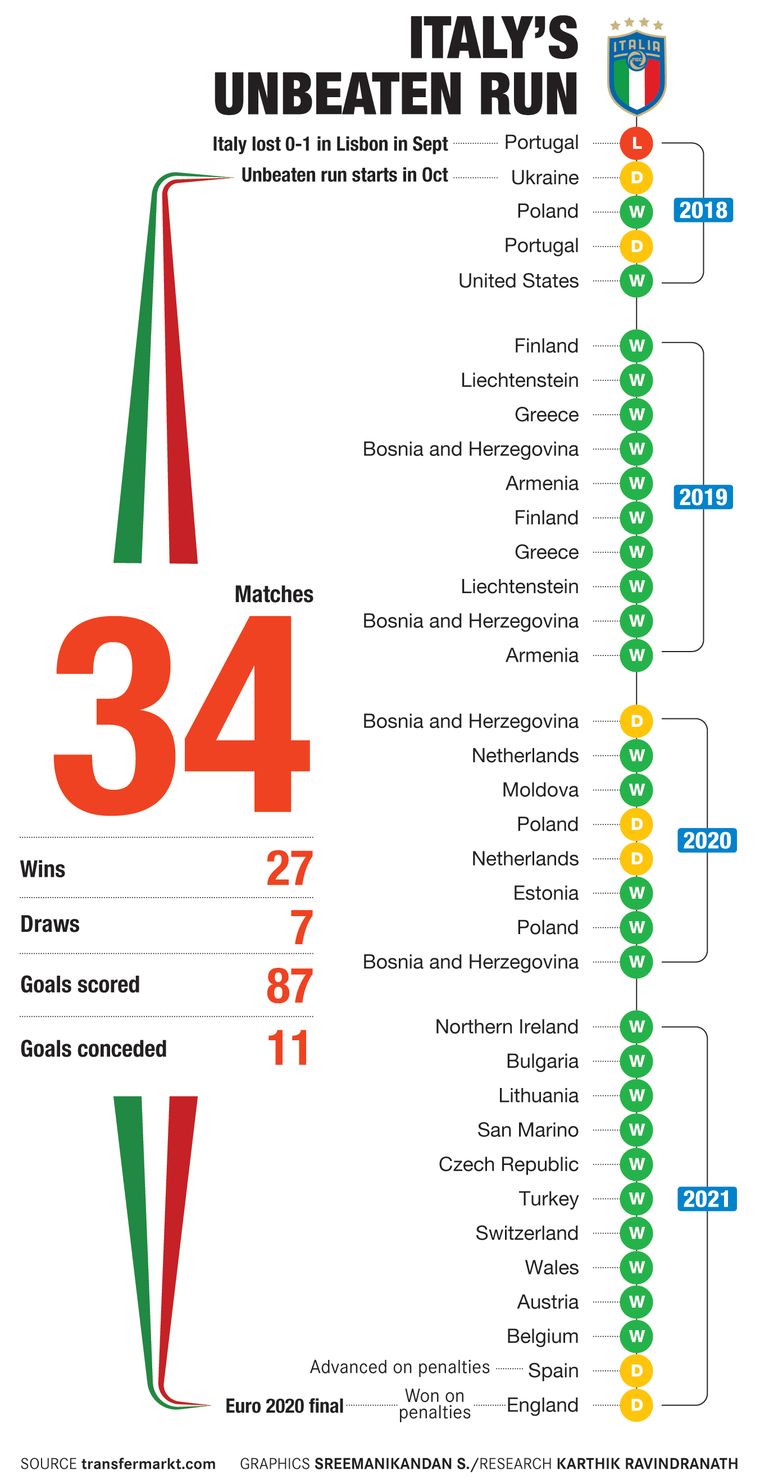