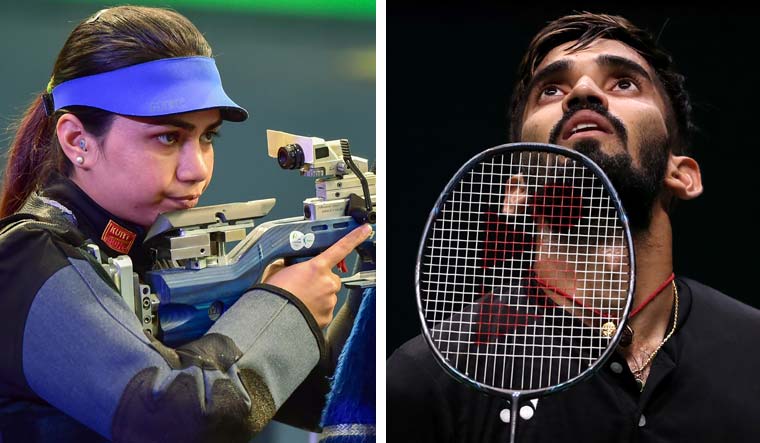 Twist of fate: Kidambi Srikanth and Apurvi Chandela have both been confined to their homes | PTI, AP

WHEN AT HOME in Jaipur, Apurvi Chandela is usually relaxed. The shooter begins the day with an early-morning run, followed by a swim and then two to three hours of training at the shooting range her hotelier father built for her. She spends the afternoon playing with her dog and reading books, followed by an evening session at the range and an hour of exercise.

But this was before Covid-19 struck. Before the Olympics was postponed by a year to July 23, 2021, Apurvi was part of the 15-member Indian squad that had qualified for Tokyo 2020. “Ever since the lockdown, I have been busy doing housework and helping my parents,” says the 27-year-old. “I wake up at 5am and ensure that all tasks are over before they wake up. Then I help them out with breakfast and dishes, and go for my training—two hours in the morning, one-and-a-half hours in the evening. I also make time for physical training; around an hour or so. But there is a lot of physical activity already happening, so I reduced the training load.”

Last May, Apurvi had become world number one in the 10m air rifle event. But now, because of the virus, her plans of four years have been undone.

In the run-up to the Olympics, Apurvi was to compete at the International Shooting Sport Federation World Cup in Delhi and Munich in March and June respectively. But the events were shelved; the ISSF is yet to announce the reworked schedule.

“The lockdown was necessary, but it is a bit of a disappointment because we had been preparing for so long,” she says. “As the Delhi World Cup got postponed and the Tokyo test event was cancelled, it is best not to go to the Olympics now without competition. In that sense, we will have enough time next year, and more competitions to prepare better for the Olympics.”

Pre-lockdown, Apurvi had ticked almost all the boxes on her “to- do” list. “I had already covered everything in January in Europe—testing my equipment, rifle, ammunition,” she says. “All of that was ready, but now I will have to test it all over again before the Olympics. I will have to go back to Europe in January, probably, if everything settles down. I have a spare rifle. All other parts are ready; I just have to change the barrel.”

For the moment, Apurvi wants to take each day as it comes. She has a strong support system, with her team—personal coach, physiotherapist and mental trainer—helping her. “I do not know how long [the uncertainty] will continue,” she says. “Only once coronavirus cases slow down and we can step out will coaches be able to work out a plan. Meanwhile, I can just stay in touch with the game. I had a whole plan sorted out [regarding] when I wanted to peak. Last year was good, and I am hoping to continue the momentum.”

Says Dr Chaitanya Sridhar, a sports psychologist who consults with JSW Sports and the Sports Authority of India centre in Bengaluru: “Some of them have taken it more positively as they feel they have got more time to prepare. But as the days progress, and they spend time in constrained spaces, things will not get easy. Athletes used to getting exercise could get angry and irritated. The key would be for them to take a break, use this time to recalibrate, look at it as window of opportunity and make use of it.”

If there is one athlete who will see the current situation as a window of opportunity, it is shuttler Kidambi Srikanth. The former world number one has been beset by injuries and woeful form, and is currently ranked 14th in the Badminton World Federation rankings. As per the qualification criteria, the top 16 players, as on April 25, were to qualify directly for the Olympics. On March 13, BWF had suspended all tournaments from March 16 to to April 12. A number of these tournaments fell within the qualification period for the Olympics. The BWF froze the rankings, but is yet to announce fresh regulations related to qualification. With no clarity, Srikanth’s Olympics dream is hanging fire.

Currently, he is at home in Guntur, Andhra Pradesh. The Pullela Gopichand Badminton Academy in Hyderabad is shut. Srikanth, 27, trains at home, and has no access to a court or a local gymnasium. “It (the uncertainty) is tough for me,” he tells THE WEEK. “You plan 12 months in advance so that you peak at the Olympics. I have to start from scratch now. But I think the IOC (International Olympic Committee) has done a great job announcing the new dates quickly.”

Asked about his poor form, he says: “It is mainly the re-occurrence of my injury. Also, the continuous change of foreign coaches in the past year and a half. I also pushed myself too much in search of results, which led to injuries. I have taken stock of the situation and I am really taking things slowly. Sitting at home is really tough. I used to go back home only to take a break and never stayed for such a long time. Had I been in Hyderabad, I would have arranged something.”

Regardless, he believes he is mentally strong enough to weather the storm. “I do not take too much pressure,” he says. “I am only focused on playing well and I do not think of qualification while playing. I do not want to plan too much.”

Srikanth might not be showing signs of mental strain, but some nervous queries did come up during online sessions the GoSports foundation conducted with its athletes recently. Says Dr Divya Jain, sports psychologist, Fortis Healthcare Delhi, who conducted one of these sessions: “There were queries related to how their training had gone to waste. There was uncertainty over when the next competitions would begin. Issues related to the process of qualification have cropped up, timelines have changed, athletes were feeling a sense of loss; they are not used to being cooped up for long.”

Her advice to the athletes was to not think about the uncontrollable. “We advised them to shift their focus to the process of training, look at the short term, maintain fitness and break down skills,” she says. “For example, if footwork needs more attention, try working on that.”

She adds that, as the days of lockdown progress, remaining connected with family and friends would be key for the athletes.