Wrong for oppn to interfere with farmers’ interests: Tomar in exclusive interview 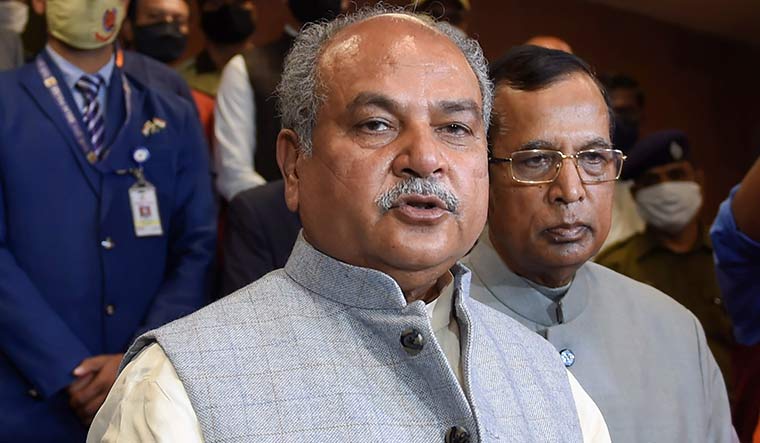 The Narendra Modi government has been continuously taking farmer-friendly measures, says Union minister of agriculture and farmers welfare Narendra Singh Tomar. In an exclusive interview to THE WEEK, Tomar claims that the new farm reform laws will give farmers freedom to sell their produce anywhere in the country, and strike a deal even before sowing their crop, which will increase their income.

Q/ The new farm laws have led to protests. Your views?

The Narendra Modi government has been continuously taking farmer-friendly measures. Recognizing the gaps in various fields, Modi started taking concrete steps to overcome them since becoming the Prime Minister: In this agriculture sector has taken priority.

These agriculture reforms keep in mind the long-term interests of the farmers. Through these laws, farmers have been given freedom to sell their produce anywhere in the country, and strike a deal even before sowing their crop, which will increase their income. The government also aims to increase production and productivity in agriculture so that farmers are prosperous.

Q/ Do you think the protests are politically motivated?

All the good steps taken by Modi have made some opposition parties fret and fume. They cannot digest the good work done by the government [and] are trying to do politics hiding behind the farmer interests. If the politicians want to oppose, they should come out in the open and speak out directly. It is completely wrong for the opposition parties to interfere with the interests of the country's farmers.

Q/ Critics say the government has done little for farmers.

Under the PM Kisan Yojana, about Rs 1 lakh crore has been transferred to the account of 10 crore farmers. Adequate arrangements have been made to ensure there is no shortage of fertilizer. To increase the income of small and medium farmers and to promote cluster-based farming, 10,000 farmer-producer organisations are being set up. Through the Pradhan Mantri Crop Insurance Scheme, provisions have been made to compensate farmers for damaged crops. In the last three and a half years, a premium of Rs17,738 crore was deposited, while five times that amount, Rs 87,000 crore, was disbursed for their claims.

In the last nine months, 1.48 crore Kisan Credit Cards were distributed and an additional loan of Rs1.34 lakh crore was sanctioned. The Rs1 lakh crore Agriculture Infrastructure Fund will provide facilities through private investment, allowing farmers to store produce and sell it later at a better price. The agriculture budget in 2013-14 was Rs27,000 crore, while in this financial year, it is Rs 2.83 lakh crore. This makes the government's commitment towards agriculture [evident].

The government is constantly in talks with the representatives of the farmers organizations. It has been clarified that the MSP will continue. The prime minister has assured this, as I have said in both the houses of Parliament.

After Modi came to power, the MSP of various agricultural produce increased steadily. During the ongoing kharif marketing season, about 37.38 lakh farmers have benefited from the procurement operations, with MSP value of Rs 67,248.22 crore (till December 9), which is much higher than last year. In 2013-14, the MSP of wheat was Rs1,400 per quintal, which increased to Rs1,975 in 2020-21. Similarly, there has been a 43 per cent increase in the MSP of paddy in the last six years. In 2013-14, the then government spent Rs33,874 crore on the purchase of wheat, whereas our government spent Rs 62,802 crore in 2019-20, which is 85 per cent more than the UPA government. Likewise, the amount is 192 per cent more for paddy.

Q/ Farmers are firm that the new laws be repealed. Will you agree?

There have been five rounds of meetings between the government and representatives of farmer organisations. We told them to give in writing any objections they have on the laws, so that they can be resolved. They raised a few points, which we considered. They have been assured that the MSP will continue. The APMC mandis operated by the states will continue. Both of these (MSP and APMC) are not even mentioned in the new laws…The Centre’s thinking is to ensure increased income for farmers, and greater convenience in selling their produce. The farmers should have an alternative system for selling their corps…In case of a dispute between a farmer and a buyer, there is a provision to approach the sub-divisional magistrate (SDM). When this issue was raised, the government said that if there is a better system available, then it would be considered.

Q/ How will you assure farmers that their interests will be protected?

The Modi government is a farmer-friendly government. Modiji courageously implemented 200 of the 201 Swaminathan Committee recommendations. No government before Modiji has started so many schemes for agriculture. The budget allocated for agriculture and farmer welfare and rural development ministries has been much more than that of the previous governments. To support farmers’ income, under the PM Kisan Samman Nidhi Yojana, Rs6,000 per year was deposited in bank accounts. Has this happened before? The government will spend Rs6,850 crore on the Farmers’ Produce Organisation scheme, and another Rs1.5 lakh crore under the Atmanirbhar Bharat scheme. Which government before this has given so much?

The laws are being implemented, and farmers are benefiting from them. A case came to our notice where a Maharashtra farmer Jitendra Bhoi did not get the entire payment for the maize crop he sold to a trader in Madhya Pradesh. He petitioned the SDM. The SDM got the complainant the full outstanding amount. These laws will prove to be revolutionary.