Farm laws are the biggest assault on farmers 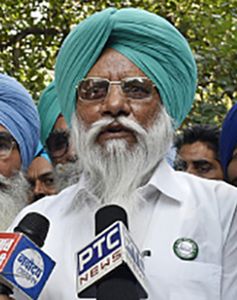 Tell us about the farmers’ struggle.

We came to know about the government’s intention in 2017. I had come to [Delhi to] attend a meeting of the Niti Aayog [then]. I wrote an article to educate people about their intentions. Then I started collecting documents, including the Commission for Agricultural Costs and Prices (CACP) reports on kharif and rabi. It mentioned that the government should get out of the business of procurement. I called all political parties of Punjab [this] February 17 and presented the documents before them to educate them on what the government was up to. They were of the opinion that if we did not fight collectively, then Punjab would not be saved. Now, it is a different matter that they are involved in their own politicking.

When was the decision to protest taken?

When ordinances were issued on June 5, we collected all farmers. This was a new experience of my life, that when we sit, we discuss everything threadbare, and take a decision. This gives me hope that no one can defeat such a move.

Why oppose the farm laws?

These are the biggest assault on farmers. It is a systematic campaign to undermine farmers. When you read the CACP reports, you understand that the formula to formulate minimum support price (MSP) is faulty. I told ministers that you waive off 08 lakh crore nonperforming assets every year, which only gives employment to 5-7 per cent people. But, in farming, 80 per cent people, be it farmers or labourers, are dependent on it. But you don’t have money for them. If you want to double farmers’ income, why not set up 48,000 mandis across the country on the Punjab pattern, and start procurement? The income will automatically increase.

But the government has assured that MSP will stay.

What is the next step?

This is the first time that people have understood that we must stay non-violent. People have understood that if they turn violent, the movement will fail. Farmers are joining in from other states. They may not be able to reach here as all trains are not operational. But we will stay here as long as possible. We are ready to face any government action. But we will go for talks.