Digging their heels in

The government has tried to wear out the protesting farmers, but they refuse to budge 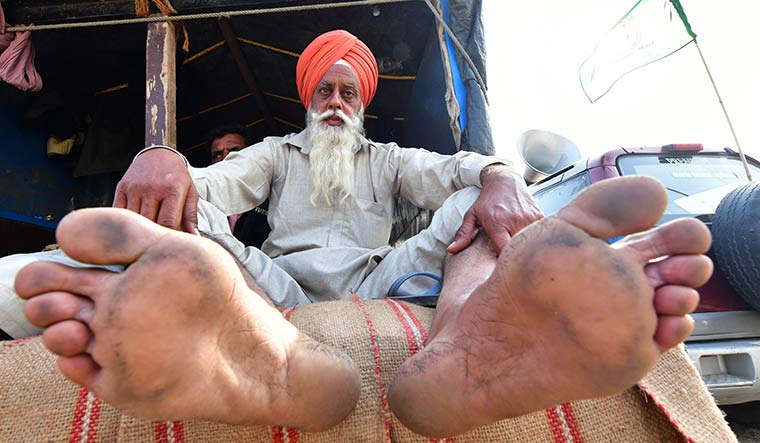 Never back down: A farmer takes rest during the agitation at Singhu border in Delhi | Rahul R. Pattom

In the sixth edition of Mann Ki Baat, in March 2015, Prime Minister Narendra Modi assured farmers that their interests would be protected under the amended land acquisition bill, which had been passed in the Lok Sabha a few days earlier. The bill, an improvement over the one passed by the United Progressive Alliance government, was to make land acquisition easy for creation of infrastructure. But as farmers’ protest grew, and with the opposition pitching in, Modi, in the eleventh edition of his popular radio programme in August 2015, announced that the legislation would not be ratified. He kept the politically important farmers’ constituency by his side.

On November 29 this year, in the 18th edition of Mann Ki Baat 2.0, Modi reassured farmers of the benefits of three new laws—the Farmers’ Produce Trade and Commerce (Promotion and Facilitation) Act, the Farmers’ (Empowerment and Protection) Agreement on Price Assurance and Farm Services Act and the Essential Commodities (Amendment) Act. The farmers persisted with their protest. But, this time, the government, too, has remained adamant as it thinks the laws would increase incomes of farmers countrywide.

The government agreed to tweak certain contentious sections of the laws to placate farmers, who have been blocking entry points to Delhi for over two weeks. Union Home Minister Amit Shah had to step in to make the offer to farmers’ unions after meetings between farmers’ leaders and Agriculture Minister Narendra Singh Tomar failed. In the proposal sent to the farmers’ bodies, the government offered to give written guarantee on MSP. It also said it would make suitable changes in laws to allow farmers to approach civil courts in case of disputes (only sub-divisional magistrates were allowed to hear cases under the new laws), make registration of contract farming within 30 days mandatory, and that the state governments could regulate non-APMC mandis and make their registration mandatory. The government also proposed to provide suitable changes on penal provisions against farmers burning stubble and assured that no changes will be made in farmers’ electricity payment mechanism.

But, after five rounds of government-farmer meetings, these “cosmetic” changes were not what the farmers were looking for. “We totally reject the government proposals,” said Dr Darshan Pal, president of Krantikari Kisan Union, on December 9. The farmers’ bodies have decided to escalate their protests across the country and try new methods. They plan to block more highways, occupy toll plazas and boycott products of conglomerates like Reliance and the Adani Group, and of companies owned by BJP leaders. Ruldu Singh Mansa of Bharatiya Kisan Union said: “My father suffered the partition in 1947, I witnessed 1984 (riots). Now, my grandson is witnessing the current protests. He will write history. A farmer can die of snake bites or [accidental] electrocution, then how can he be afraid of police bullets. We will continue till our demands are met.”

The protest has become a cultural movement with popular Punjabi singers coming out with resistance songs warning the Centre against usurping the rights of farmers. The farmers, for their part, have been more nuanced in comparison with earlier movements. The protest is strictly non-violent, farmers have rejected food offered by ministers during meetings and have even kept silent during the meetings. Vigilant volunteers are keeping their eyes peeled for mischief makers at the sites. Farmers have also kept political parties away from their forums. They are meticulously organising the massive inflow of rations and have been astute in choosing whom to engage with, even in the media. 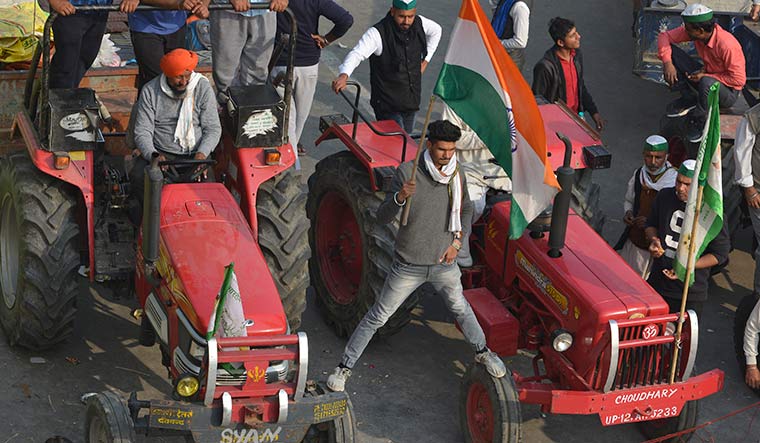 Up in arms: Farmers protesting at the Delhi-Ghaziabad border | Arvind Jain

Protests have been reported from foreign countries which have a significant Punjabi diaspora. Canadian Prime Minister Justin Trudeau, too, backed the cause. Shiv Kumar Kakkaji, a farmers’ leader from Madhya Pradesh said: “We thank Justin Trudeau, but we will not accept interference from outside. We are nationalists.”

The opposition, as expected, has lent its support to the farmers. A joint opposition delegation met President Ramnath Kovind with the plea that the government should repeal the laws. There are eight states going to polls in the next two years, and opposition parties, particularly in the agrarian states of Punjab and Uttar Pradesh, where elections are due in 2022, will be hoping to build momentum against the BJP. With the Punjab elections in mind, the Congress, the Akali Dal and the Aam Aadmi Party are playing a game of who-contributed-the-most-to-the-protest. Chief Minister Amarinder Singh brought legislation to counter the Centre’s laws. The Akali Dal withdrew from the National Democratic Alliance and the AAP refused the Centre’s request to turn nine stadiums in Delhi into jails.

The Congress is hoping to put the Centre in a tight spot, as it did in 2015 when Rahul Gandhi’s “suit boot ki sarkar” jibe found the mark. “The talks which are taking place between the farmers and the government should have happened before the ordinance (promulgated on June 5) and before the bill was passed,” said Punjab Congress chief Sunil Jhakhar. “The Centre should not learn from the US, where lobbyists influence policy.” He added that corporatising agriculture was unacceptable. Principal Budhram, AAP MLA from Budhlada, Punjab, said he had travelled to Delhi with the farmers. He said the party would stand with the farmers who are being “looted” in the guise of privatisation. Party chief and Delhi Chief Minister Arvind Kejriwal had stayed away during the protests against the Citizenship (Amendment) Act, 2019, for which Delhi was the epicentre. But, he visited the Singhu Border, one of the sites of the farmers’ protest.

For a better tomorrow: Farmers sleeping on a tractor at the Delhi-Ghazipur border | J. Suresh

The BJP accused the opposition of double standards as they had, in the past, called for reforms in agriculture. The government’s insistence on standing its ground also stems from the fact that despite all the opposition to its various policies, it has been getting resounding affirmations in the elections. “All the good steps taken by Prime Minister Modi have made some opposition parties fret and fume,” said Tomar. “They cannot digest the good work done by the government. They are trying to hide their politicking behind farmer interests.” He added that it was wrong of the opposition to interfere with the interests of the country’s farmers.

Union Law Minister Ravi Shankar Prasad said that ahead of the 2019 Lok Sabha polls, the Congress had promised to repeal the APMC Act in its English manifesto and promised to make amendments to it in its Hindi manifesto. “In a news conference in 2013, Rahul Gandhi had declared that fruits and vegetables would be removed from the ambit of the APMC Act,” said Prasad. “He had also promised to make amendments in the Essential Commodities Act.” He added that in 2010 and 2011, then Union agriculture and consumer affairs minister Sharad Pawar had written letters to chief ministers asking them to immediately implement the Model APMC Act and make amendments in the State APMC Act.

The government’s argument in favour of the new laws stem from the fact that the MSP was not being availed by a majority of farmers. The 2015 Shanta Kumar committee report said just 5.8 per cent of all agricultural households had sold paddy and wheat to any procurement agency (on MSP). The panel said that the government needed to revisit its MSP policy as it was skewed in favour of paddy and wheat, and that the Food Corporation of India should hand over procurement to the states. This is as mandated under the new laws. But now, farmers from states like Punjab and Haryana, who were availing MSP, may not get adequate government protection for their crops and would thus be left at the mercy of the markets.

The farmers’ agitation has kickstarted a debate on the agriculture sector, which had been relegated to the background for years. The hope is that it will define the contours of future political engagement unlike other movement of the recent past. 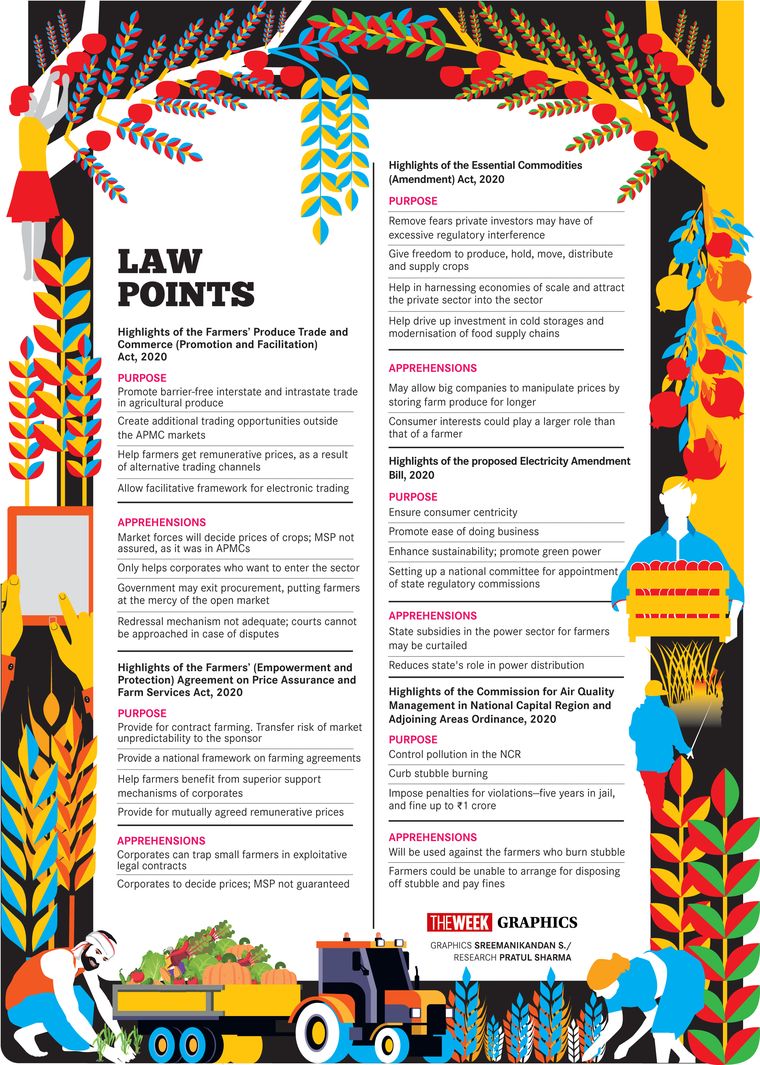